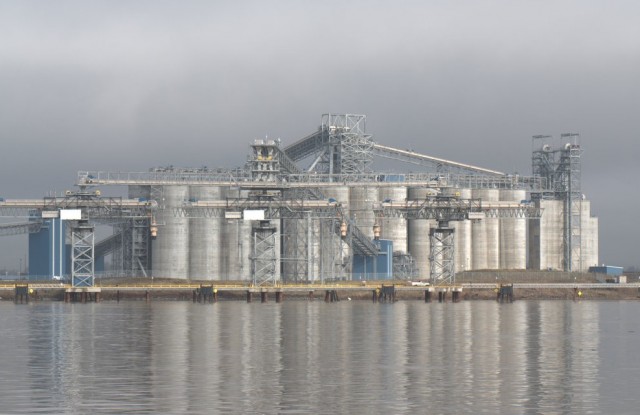 A contract is a contract…

In a previous item in The Occupier, Lester Macgurdy argued that we should not exaggerate the victory achieved by ILWU Local 21 in Longview in their struggle against union-busting and scab labor employed by EGT/Bunge. Nor should we overblow Occupy’s achievement in affecting the outcome, lest we deceive ourselves with happy talk and our own spin.

Macgurdy’s broad point has merit. Unfortunately he got one key issue wrong, that affects the overall meaning of everything else. This piece is an effort to clarify matters.

The key fact: the current status is a settled, 5-year union contract, in which EGT recognizes ILWU Local 21 as the workers’ union and bargaining agent.

Contrary to what Macgurdy says, the contract is not a unilateral and unilaterally revocable EGT “business decision.” He based that perception on out-of-date information.

EGT recognized ILWU as the collective bargaining agent for the facility workers on Feb 2, after a card-check process in which the workers hired under the January 27 “framework agreement” designated the ILWU as their union . On Feb 10, EGT and the ILWU signed a five-year legally enforceable union contract, following ratification by Local 21 members.

EGT had insisted on the “business decision” language as a workaround for one of their main legal arguments, that the ILWU’s “working agreement” with the Port of Longview giving Local 21 jurisdiction over most work in the Port violates federal labor labor law that prohibits employers from designating with what union they will bargain.

The legal provision EGT cited generally is aimed at preventing company unions. EGT’s position on it is disingenuous if not mendacious, of course, since by contracting with the scab employer General Construction, they were choosing more tractable union to represent their labor force, as well as seeking to avoid bargaining certain points and to avoid a direct contractual relationship with their workers.

There may still be some concern arising from the workaround. I don’t think, as a legal matter, that the ILWU conceded the correctness of the EGT position regarding the working agreement with the Port. It just avoided immediate conflict over the issue. But possibly at some point in the future, EGT might try to use the agreement to claim an ILWU concession.

So, what then is the meaning of the union contract? Is it a victory?

To evaluate that, we have to understand the context of the struggle and negotiations. ILWU contracts are complicated. They have a working agreement with the Port of Longview that gives the ILWU jurisdiction over most kinds of work at the Port. They also have separate contracts with shippers who operate out of the Port, both land-side, i.e. trucking and rail companies and storage facilities, and ship-side, i.e. sea transport, the latter negotiated collectively by the Pacific Maritime Association (PMA).

Meanwhile, the Port has its own contracts with the shipping and storage companies, including facility leases, and presumably the shippers have contracts with one another. The ILWU is not party to any of those contracts.

However, the ILWU’s working agreement with the Port limits the Port’s contracting with other parties. Specifically, it says that the Port shall not lease property for the purposes of evading ILWU jurisdiction. (See agreement here, click on A3, C and F links.)

Thus when EGT approached the Port about a lease to create a new storage and transfer facility at the Port, the lease included the ILWU working agreement. The negotiations began in 2006, and the facility has only just finished construction and opened. Its impending launch is why the conflict came to a head this past year.

Initially, EGT acknowledged the lease provision involving the ILWU, and began negotiating with that union. Conflict between the ILWU and EGT emerged in 2010, apparently over two key EGT demands: 12 hour straight time shifts (i.e. no overtime after 8 hours, only after 40 hours total per week), and making a key skilled labor jobs affecting workflow a managerial, rather than labor position. The two sides reached no resolution.

In 2011, EGT upped the ante by hiring General Construction to perform the work at the new facility. GC’s labor force is represented by the International Union of Operating Engineers Local 701, based in Gladstone, Oregon. Essentially, this was a move to break the ILWU jurisdiction using scab labor, though EGT tried to muddy the waters by hiring a contractor with a union workforce. At the same time, EGT sued the Port, saying that the ILWU jurisdiction part of its lease violated federal labor law.

These moves raised the stakes dramatically, turning a contract negotiation for Local 21 into an existential struggle for the entire ILWU. Since the 1930s, the union’s capacity to shape working conditions for its members’ strenuous and dangerous labor, to limit manipulation and exploitation in what had been a “casual” hiring process, and gain good wages and benefits, has depended on its exclusive jurisdiction. EGT’s breach of its contract with the Port threatened to create a crack in the wall in practice at Longview, while its lawsuit seeking to nullify the ILWU’s contract with the Port threatened to render the ILWU jurisdiction illegal in principle from Alaska to southern California and Hawai’i.

The result was a huge, confrontational struggle mobilizing wide union and community solidarity beginning in the spring of 2011. The details are beyond the scope of this piece, but are well worth learning about. Occupy Portland and Occupy Longview, and other Occupies up and down the coast, began joining in the solidarity efforts soon after the movement emerged here.

So is the new contract a victory?

In the foregoing context, the achievement by Local 21 of a contract with EGT, forcing them to give up hiring General Construction and maintaining ILWU jurisdiction in practice at the Port of Longview, must be considered a substantial victory in my view. EGT tried and failed to replace ILWU workers. EGT gave up its lawsuit against the Port in federal court which had the potential to establish a reactionary interpretation of labor law as principle and precedent for other ports.

However, this victory came at some cost, and clearly the struggles over port unionization are not over.

Regarding the specific local contract, the outcome is not clear. News reports show that workers will be working 12 hour shifts, which is what EGT wanted. It is not clear if they are straight time shifts as EGT wanted, or if the ILWU preserved overtime after 8 hours each shift. The news reports are silent as to whether the skilled job EGT wanted reclassified as a management position remained a union job.

More importantly, the “framework agreement” out of which the union contract emerged has shifted the balance of forces for future negotiations, certainly with EGT and perhaps more broadly.

That “framework agreement” of January 27 involved not only the ILWU, but EGT’s relationship to the Port of Longview. EGT and the Port agreed to end EGT’s lawsuit against the Port on the basis of a renegotiated lease clause stipulating that the Port has nothing to say about union jurisdiction under the lease. The ILWU was not party to that change.

Lester Macgurdy was right to focus on the change in the lease as a serious setback for the union, although it does not exactly end the ILWU’s jurisdiction as he suggests. Rather it changes the legal relationship between the ILWU and the Port going forward.

Before the agreement between the Port and EGT, the Port was trying to enforce its agreement with the ILWU. EGT in turn was suing the Port, and the ILWU was intervening in that suit.

The revised lease agreement settles EGT’s suit on terms EGT likes locally. It appears to mean that the Port of Longview no longer is even ambiguously on the ILWU’s side, legally speaking.

The Port of Longview’s revision of its lease with EGT does not directly involve the ILWU, which is not party to the lease. Instead, it puts two of the Port’s contracts in direct conflict with one another. The Port’s revised lease with EGT is now clearly in conflict with its prior working agreement with the ILWU.

What the changed lease terms do, in the short term, is shift the legal burden. Before, the Port had to defend its agreement with the union against EGT, since that agreement was part of the lease. Now it would be up to the ILWU to sue the Port, if somehow a conflict arose, to try to get the revised lease overturned as a violation of the working agreement. I am not sure if the union has standing to sue just on the basis of the conflict of contracts, or would only gain standing if it could show some kind of substantive harm. I am not sure if the claim can outlast the end date of the working agreement.

The changed lease also shifts the bargaining position of the Port vis a vis the ILWU when the working agreement comes up for negotiation, since the Port now has an interest in removing the conflict of the contracts It retains an interest in overall labor peace at its facilities and those it leases, of course, but a new consideration has entered the picture.

This does look like it makes for a harder struggle to retain jurisdiction, as Lester Macgurdy says. But exclusive jurisdiction hasn’t ended yet. Before all of this, the ILWU already was negotiating both with the Port and with specific Port lessees. That hasn’t changed. The union has regained complete current jurisdiction, and still has an agreement for that with the Port. The local question is whether it can maintain that agreement in the face of the conflict of the Port’s contracts, and other pressures.

The broader question is how these results with play into the ILWU’s overall negotiations on the coast and Hawai’i, with grain transport and storage companies, which come up in about a year, and with the PMA, which come up in two years. Those negotiations and the five-year span of the EGT contract set the broad contours of likely future solidarity struggles.

Meanwhile, there may need to be support for ILWU members still facing charges in connection with union resistance to scab labor and maintaining picket lines last summer.

A Couple of Other Perspectives

Here are a couple of interesting perspectives on recent events that might be a bit out of the way for Occupier readers:

On the agreement and the process leading to it, including the community and Occupy role, from Labor Notes, a publication that has ties to the Association for Union Democracy (a pro-labor union reform group) and to some extent with Solidarity.

And here is an odd one, giving something of the Operating Engineers’ take on the initial “framework agreement,” published by the editor of the NW Labor Press on a website associated with the CPUSA. NW Labor Press is a publication of the Northwest Central Labor Council, which came out harshly against the IUOE’s scab role — which the national AFL-CIO notably did not do, which may be why the CP is willing to publish this viewpoint.

1 comment for “A Contract is a Contract: Clarifying the ILWU/EGT Outcome in Longview”