How are government budgets created, and in whose interests? In Portland, Oregon, the city recently held the second and last of its public budget forums, where the community could offer feedback to help craft the city’s budget. Over two hundred people attended the Wednesday evening meeting at Cleveland High School, many more than city officials anticipated based on the lack of chairs, food, and electronic remote controls that were handed out to attendees to provide answers to survey questions (this writer was among the many not fortunate enough to receive a clicker or a chair). 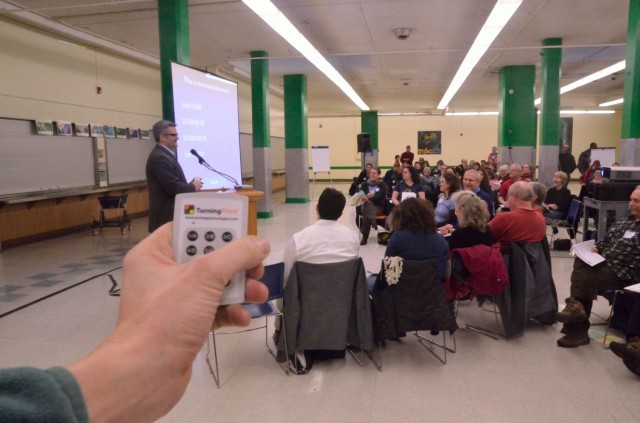 Mayor Sam Adams addresses the crowd. In the foreground is a "clicker" used to tally votes from the audience. Photo by Paul.

Those who had remote controls responded to the demographic questions that began the event, and revealed that much of the city was vastly under-represented; the poor, minorities, and the largest working class neighborhoods of North and outer East Portland.

The attendees spent the first hour of the two-hour event being talked at. What we were told was as much ideology as fact. For example, city officials based their budget on the following premise: because the recession has caused a major drop in tax returns, large cuts in services and jobs had to be made. There was no alternative. Zero mention was made of raising taxes on those who could afford it — the wealthy and corporations. There was also zero mention of using the city’s large financial reserves to save jobs and prevent cuts. Shockingly, there was no mention of the layoffs the city was planning, or the immense need to create new jobs in a city that has a much higher unemployment rate than the nation’s average. With a “cuts only” budget, creating jobs cannot be a topic of conversation.

After the “cuts only” solution was presented, much of the event was dedicated to discovering the community’s “priorities,” presumably with the intention of having the least prioritized services being cut, since cuts were mandatory. This inevitably pitted the different attendees against each other, with large sections of the crowd cheering in support of the budgets for the Bureau of Parks and Recreation, or the Bureau of Transportation, in the hopes that their services or jobs wouldn’t be cut. If one accepts the city’s premise of a “cuts only” budget, this must be the sad outcome. 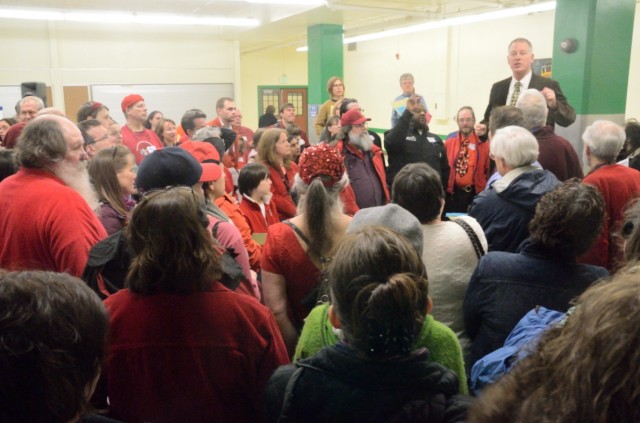 Parks and Recreation Director Mike Abbaté speaks with a large number of people turned out to oppose the closure of Fulton Community Center. Photo by Paul.

Why did the city limit its options? Unfortunately, Portland is simply following a national trend on a city, state, and federal level where Democrats and Republicans have agreed that taxing the wealthy and corporations must not be an option in addressing the social crisis that resulted from the Great Recession, regardless of the vast inequality of wealth that has erupted over the last thirty years. Presumably, governmental officials have chosen this route because their political parties depend on the wealthy for campaign contributions to ensure winning elections and staying in power.

Because politicians tell us that we cannot take money from the wealthy, money must be taken instead from public workers through wage and benefit cuts or layoffs; or be taken from other working people in the form of fee increases, sales taxes, or cuts to services provided by public workers in the form of school, community center and park closures, transportation cuts (buses, trains and roads), crumbling infrastructure, library closings, etc.

Public comment at Portland’s budget meeting was severely restricted. After we gave the Mayor our budget “priorities” via remote control, we were split into large groups to talk with city officials who led large departments — each were mobbed by dozens of attendees begging not to have their programs cut.

This writer joined a large contingent of city workers who pinned down Portland’s chief administrative officer, who was asked why the city refused to spend the hundreds of millions of dollars of reserve funds to preserve services and the jobs that provide them. The official revealed in coded language that much of the funds were needed to calm the fears of rich investors, who profited from buying Portland’s municipal bonds. Without maintaining a large cash horde Portland’s AAA bond rating could be threatened, and investors might worry about the return on their investment. This dynamic is present all over the U.S., as cities have chosen this “attract the wealthy” model of budgeting (so-called urban renewal), to the detriment of working and poor people. 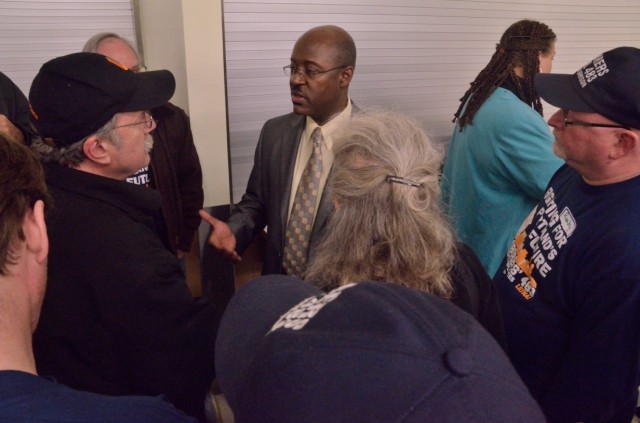 On May 5th in Portland, a coalition of community groups and labor unions are organizing a Community Assembly to Create a People’s Budget. This event will begin with the exact opposite premise as the Mayor’s event; because the recession has caused a major drop in tax returns, we must raise revenue by taxing those who can afford it while using available reserve funds to save and create much needed jobs (the private sector has failed to solve the jobs depression; the public sector must step in to help relieve the crisis).

Instead of ignoring or blaming public workers for the recession, we plan to honor them and the services they provide to the public, while giving support to the various ongoing union campaigns that are fighting cuts. Instead of prioritizing a “cuts only” budget, we will prioritize our needs — for jobs and against cuts. Instead of hiding Portland’s urban renewal scheme, we plan to bring it into the light, along with other ways that the city has shaped its policies with the rich investor first in mind.

1 comment for “A Corporate Budget or a People’s Budget?”