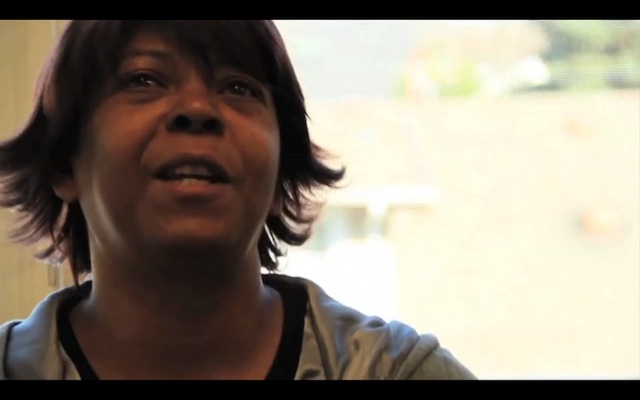 On May Day 2012, when a Portland police officer told the group of folks who had gathered in Waterfront Park for an unpermitted march on Portland’s streets that they should obey the laws, but if not, well, there would be consequences, I had a feeling there would be trouble. There were many police on bicycles, and while they did not outnumber the marchers, the ratio was unsettling, and the question in my mind was more a matter of how much violence, rather than if there would be any.

There was a lot. Only a few blocks into the procession, the police threw a man to the ground. A few blocks later, at least three people were thrown down and one was later led away with blood flowing from his head. Up toward Portland State University, a woman was brutally assaulted by a clutch of cops who at that point seemed more like a roving pack of wolves, waiting for the opportunity to strike. Down around Third and Morrison, another woman was dragged on the street by her hair.

It was one of the most violent things I have ever witnessed. Certainly, the police response was over the top, and it was sustained for close to 90 minutes. In addition to being on bicycles, cops also amassed in cars and on horses. All for a march that for most of the time did not contain more than a couple of hundred people. 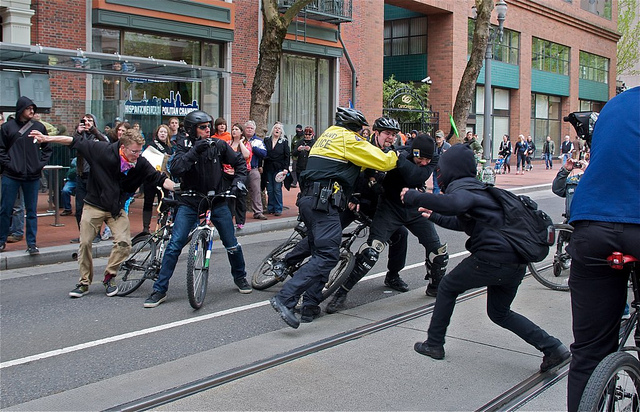 While the persistence of the police in assaulting people may have been uncommon, the results were not. Portland has a police problem, a pattern of police violence. We have a police force that is inclined toward a reckless Wild West type of violence where questions are better asked later, and where it seems only the victims are held accountable. And that violence is often far worse than smashing people on the street or caving in a face with a punch or exploding a groin with a well-placed knee. Eventually, you will get up from those injuries.

But for Aaron Campbell, James Chasse, Kendra James, and Keaton Otis–all of whom are featured in Safe and Sound?, now showing at Place Gallery on the third floor of Pioneer Place Mall–there was no getting up. All were killed–some might say murdered–by the Portland Police. Their deaths left holes in their families and communities

Safe and Sound? is a community-based collaborative video that will soon be expanded into an online archive. Assembled by local artists Julie Perini, Jodi Darby, and Erin Yanke, it attempts to make those holes more glaring, to show that these losses are our losses, and that these deaths, as well as the violence inflicted upon those who have survived, are not aberrations committed by a few bad apples, but a result of a system of policing that is rooted in violence and does not hold the perpetrators of that violence accountable.

Although the video is a loop that can be begun at any point, it works best from the beginning where a brief history of the modern police force is given. Today’s police, derived from the slave patrols of the 18th and 19th centuries, still, according to author Kristian Williams, maintain control of the work force and reinforce white supremacy. What makes Portland’s police somewhat rare compared with other forces around the country is that it, like many civil institutions in Oregon, can trace its roots back to a desire to create an all-white state, one whose institutions were never meant to serve non-whites.

One result of that history can be found in the next section of the film which deals with Kendra James, the 21 year old Black woman whom the Portland police shot and killed on May 5, 2003. Like all the stories in the piece, this is difficult stuff. Kendra James is momentarily resurrected, both in pictures and in the touching words of her mother. Her legacy, as with the legacy of other victims, remains in limbo, made evident by her mother’s plaintive question, “How come they’re always the winners, and we’re always the losers?”

The story of James Chasse provides one answer: a compliant media that rarely questions the police’s version of events and whose narratives often focus on the victims’ criminal attributes. Chasse, who suffered from paranoid schizophrenia, is remembered as an “imaginative artist, musician, and poet,” and was–like James, Campbell, and Otis–beloved for beautiful qualities that did not fit the police depiction of him, and thus were largely absent from immediate reportage. In Chasse’s case, not only were these attributes left out, they actually left one with the feeling that this man, who had 16 ribs shattered, another ten bones broken, and lung punctured, and who died in the back of a patrol car because the police refused to let him go with a paramedic to the nearest hospital–instead eventually taking him themselves, too late, to a far away one–may have gotten what he asked for. After all, the officers who beat Chasse to death–Kyle Nice, Christopher Humphreys, and Bret Barton–were not disciplined, and Multnomah County District Attorney Michael Schrunk did not bring an indictment against them.

Safe & Sound? focuses on the lives of the victims–both the living and the dead–and it does not include any testimony from police officers. No doubt, this will strike some viewers as lacking balance, but this is the same line lamented by those who find it unjust that there is no white history month. Just as the dominant narrative day in and out comes from the white perspective–particularly a white, male, heterosexual, Christian one–after a police shooting the corporate media almost always gives the police point of view, and maybe sometime down the road in something resembling a mea culpa, excavates the body of the victim. But come the next shooting, the Pavlovian response kicks in and the victim’s dark past is dredged up, once again giving legitimacy to police violence. 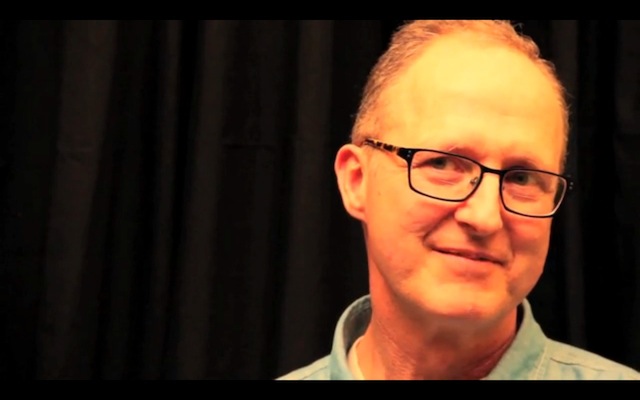 Three people in the installation who survived their encounters with the Portland police–Kathryn, Manny, and Mark–apparently also got what they asked for. Actually, Mark tells how a judge told him he should have known when he went to a protest that he was risking arrest. Aside from being an interesting interpretation of the First Amendment, the statement also ignores that Mark was not just arrested, but beaten by numerous cops.

Kathryn, whose partner was being attacked by police officers, intervened in an effort to protect him. She talks of being beaten and tazed, and in one of the most disturbing parts of the film, describes a male police officer sexually assaulting her–running his fingers through her vaginal area–and how her pleas for a female officer to pat her down were ignored, and at one point, even mocked by a woman cop.

The pacing of the film is extraordinary. The various interviews and narratives are interspersed with photos of places where police shootings have occurred. A gas station, a Fred Meyer, an apartment complex–it seems no place is safe. Taken by Ian Wallace, those photos provide a kind of anti-drama, a silent counterpoint to the violence. These sites are largely empty, even ghostly, yet they are places we pass and visit every day, hiding in plain sight. They give the film the feel of a Sergio Leone movie where seemingly interminable moments of nothing are punctuated by brief moments of extreme violence.

The most harrowing and devastating moment of the installation is the piece on Aaron Campbell. Over the course of two still shots of an apartment building we hear about three minutes of police audio as Campbell, who was distraught over the death of his brother earlier in the day, is gunned down. The words are devoid of emotion. It is a job, perhaps considered well-done, maybe just necessary. But it is done. Campbell’s grandfather, too late, calls in and asks the police to wait for him to arrive so he can talk down his grandson. By then, Officer Ron Frashour had shot him dead. Or as the tape had it, cold and lifeless as Campbell’s punctured corpse, “He’s down.”

A few weeks ago, on May 5th, there was a service and march honoring the memory of Kendra James. A woman at the march, Kalei Luyben, hung from the I-5 overpass on North Skidmore a list of people whom the Portland police have shot since James. “There are holes in the community as a result of these losses,” she told me. “And we go on with the holes and remember the fragments of a life.” For those who knew the victims, those fragments are barbs, lodged under the skin, always pulling them back, reminding what might have been.

For those who remain, their lives have changed. Manny, who was berated and subjected to intense intimidation by a bevy of cops after a bicycle infraction because he refused to sit in an uncomfortable position, does not ride his bike anymore. Kathryn sweats at the sound of a siren. Ten years later, Mark is “tangibly frightened” when near jails or public buildings where police are present. Keaton Otis’ father, Fred Bryant, regarding Otis’ child, remarks, “What they have left us with is that we have to explain why her dad ain’t here and protect her from the forces that be.” He then adds, “Some people say, ‘If something happens, don’t call the police. We’ll take care of it ourselves ‘cos if they come, somebody’s gonna die.’ And that’s so sad to say about a city that you live in.”

But in these glaring absences there is resistance and hope. We hear from some of the many Portlanders who are working for greater police accountability, as well as for community based alternatives to the Portland police. Progress is slow, but is is being made. At the march in remembrance of Kendra James, Dr. Leroy Haynes of the Albina Ministerial Alliance Coalition for Justice and Police Reform, reminded the crowd that justice takes time. Over forty years later, he noted, justice was finally rendered for those who had been victims of crimes during the civil rights era.

Love, sometimes against all odds, such as the terrible losses suffered by the families and friends of Aaron Campbell, James Chasse, Kendra James, and Keaton Otis, endures. And it sometimes becomes something greater. James’s mother, Shirley Isadore, says, “When I see something going down with the police, I step back and I watch. I watch to see how they’re gonna treat that person.”

Isadore’s eyes are just two among the many that are watching Portland’s police. Safe & Sound? will become a collection of counter-narratives to the police ones that dominate the corporate media. The videos from the installation will become part of an online resource/archive about police violence in Portland. The site will include all of the videos on view at Place, plus longer interviews and other media not included in the installation. The site will also contain resources such as a glossary, profile pages about local groups working for greater community participation in systems of safety and justice in Portland, information about national organizations, listings of books/films on the topic, and more. Individuals and organizations will be able to use the site to develop their own screenings and discussions using appropriate groupings of videos. The artists plan to augment the project over the next several years, producing more video interviews with community members sharing their stories, videos about community resistance, and videos commemorating the loss of community members to police violence.

Safe & Sound? will be showing at Place Gallery in Pioneer Place Mall until July 6th.  The video will show at the Red and Black Cafe on Friday June 7th at 7 PM.