Refusing to back away from a city in emotional upheaval in the wake of a white supremacist murdering two of three people trying to stop his verbal assault on two young black women, 400 fellow white supremacists from around the country converged on Portland on June 4th for a “Free Speech” rally. More than 5,000 anti-white supremacy groups and individuals turned out in opposition.

The white supremacists were protected by many brands of law enforcement, including the Portland Police Bureau, Oregon State Police, and the Department of Homeland Security, the latter of which worked in tandem with at least one of the rallying white supremacist groups to arrest anti-white supremacy protesters. Near the end of the event, as was the case on two other occasions–a rally against Donald Trump’s inauguration and the May Day parade–the Portland police violently attacked people protesting the rising tide of fascism.

The white supremacists began gathering in Terry Schrunk Plaza a few hours before their rally’s 2 PM scheduled start, and likewise, opponents also congregated early. Clearly the most militant of the counter protesters–people belonging to the anti-fascist group Antifa and similar anti-fascist groups–assembled across the street in Chapman Square. Dressed in black and wearing garb masking and protecting their faces, they amassed many deep along the sidewalk facing Schrunk. A largely labor contingent gathered in front of Edith Green-Wendell Wyatt Federal Building on the south side of Schrunk, while to the north pretty much everyone else opposed to white supremacy crowded into front of City Hall. It was an impressive showing, one that, due to the layout of Schrunk Plaza, effectively surrounded the white supremacist rally. 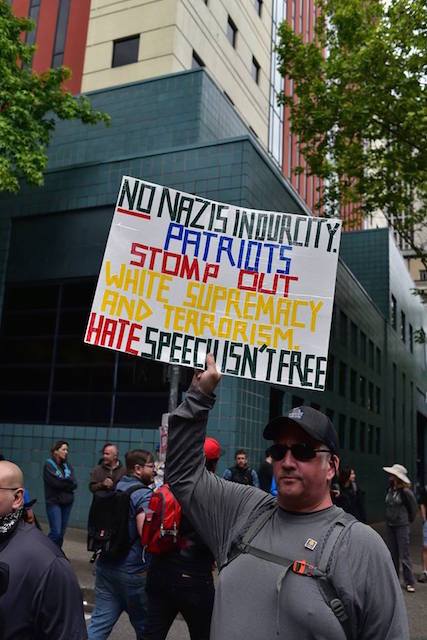 The anti-white supremacy protest was an interesting and somewhat unsettled display of solidarity, not least for the fact that Antifa has caused consternation among some people because of its willingness to engage in more militant actions against white supremacists and also has become associated with occasional property destruction at rallies, such as at May Day. Some protesters also have not wanted to risk association with Antifa if only because the Portland police have a habit of committing violence against it and escalating that violence indiscriminately against all people in the vicinity.

The gatherings outside City Hall and the federal building saw responses that while hardly muted, had a more tepid mood than the one in Chapman. In front of City Hall, the crowd extended well into 4th Avenue while a small group of white supremacists, protected by Department of Homeland Security police (Schrunk is on federal land) verbally sparred with their opponents. Eventually the police closed off the sidewalk on 4th abutting Schrunk, although the war of words continued.

Around 3 pm, while sitting with my better 99% on a bench in Chapman she asked, “What’s going to happen when their rally is finished?”

“I assume they will go home,” I replied.

“But how are they going to leave the park?”

I had not considered the question, and had no answer, but I was sure it would not happen easily. I began making another loop around Schrunk, and when I got to City Hall I heard the Portland Police order people in Chapman Square to move away from the sidewalk on Madison to the center of the park. You do not need to be around too many of these type events to get a feeling for when the police have started on the slope toward wholesale collective violence. I quickly made my way to Chapman, telling some people that I thought the police were soon going to attack, before checking to make sure my better 99% felt reasonably safe. She did not, and she wanted to leave. About two minutes later, we’d only made it a couple of blocks away from the park when we heard the first of many concussion grenades. Once at home, we saw online footage that has become all too familiar: militarized police haphazardly assaulting Portland citizens.

As always, the police had an excuse, saying some people threw bricks and a balloon filled with some fetid liquid. Aside from the fact that so far no video has been produced showing this, how does this justify such an indiscriminate attack? But just like on May Day, they assaulted the whole crowd in Chapman, opening fire with rubber bullets, concussion grenades, and tear gas, as well has beating people with batons. As the Portland police assaulted anti-fascists in Chapman, people reported that some white supremacists began attacking counter-protesters, something that was ignored by the police.

In order to be surprised by this, you either have to be completely out of touch with the news and history, or as Noam Chomsky would say, extremely well-educated. Just sticking to recent events, in late April, Portland police coddled a white supremacist rally and march in the Montavilla neighborhood in Southeast Portland. Two weeks later, TriMet police chased down and murdered Terrell Johnson, a 24-year-old Black man who was allegedly menacing people on a MAX platform, later saying they killed him because he pulled out a box cutter, which he apparently did not wield while on the train platform. 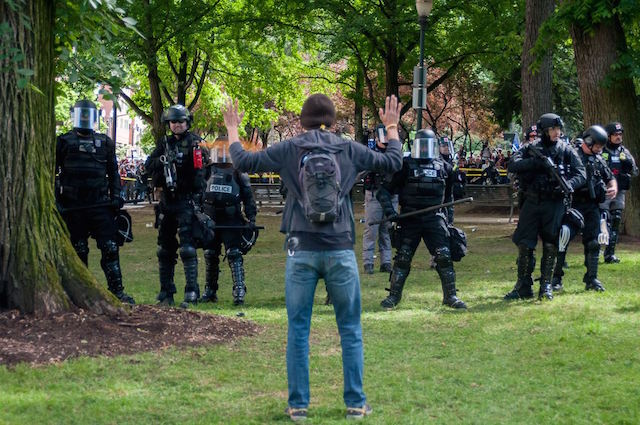 Yet, when on Friday May 26th, Jeremy Christian, who’d attended the Montavilla event, abused two young Black women and then brutally murdered two of the three people who intervened, police did not hunt him down. Rather, upon finding him, they let him yell a bit, wave his knife, and finish whatever booze he was swilling. The night before, Christian had been threatening people on a Blue Line MAX train, but he suffered no consequences.

Again, this should be no surprise. The police are the spiritual children of the slave patrols, the Ku Klux Klan who helped enforce Jim Crow laws, and the police who sicced dogs on, shot water cannons at, and often oversaw lynchings of Black people demanding equal treatment as humans. They have always supported white supremacy.

That is of particular significance to me.

My better 99% is Chinese. Being downtown on Sunday, she was understandably worried. For these white supremacists, she is less than human. She is garbage. She does not belong here. She is not worthy of life. While the Portland police defended white supremacists and their hateful ideology, it was Antifa and the other anti-fascist groups that had her back. 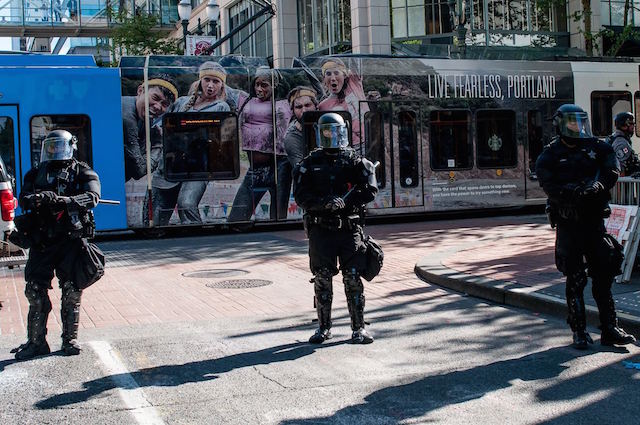 No doubt people are going to blame the Antifa folks for something. In fact, some already are doing so. But I want to thank them, as well as all the other people who showed up to reject these white supremacists, because the ugly fact is that the Portland police, along with the other police forces, defended the white supremacists and stood tall for white supremacy.

Mayor Wheeler recently proclaimed Portland a Sanctuary City, a very nice term that does not seem to have much meaning. Wheeler made the declaration in response to the Trump Administration’s crackdown on immigrants and refugees, but it is difficult to find any discernible effect this has had on the Immigration and Customs Enforcement Agency’s aggressive persecution of immigrant communities.