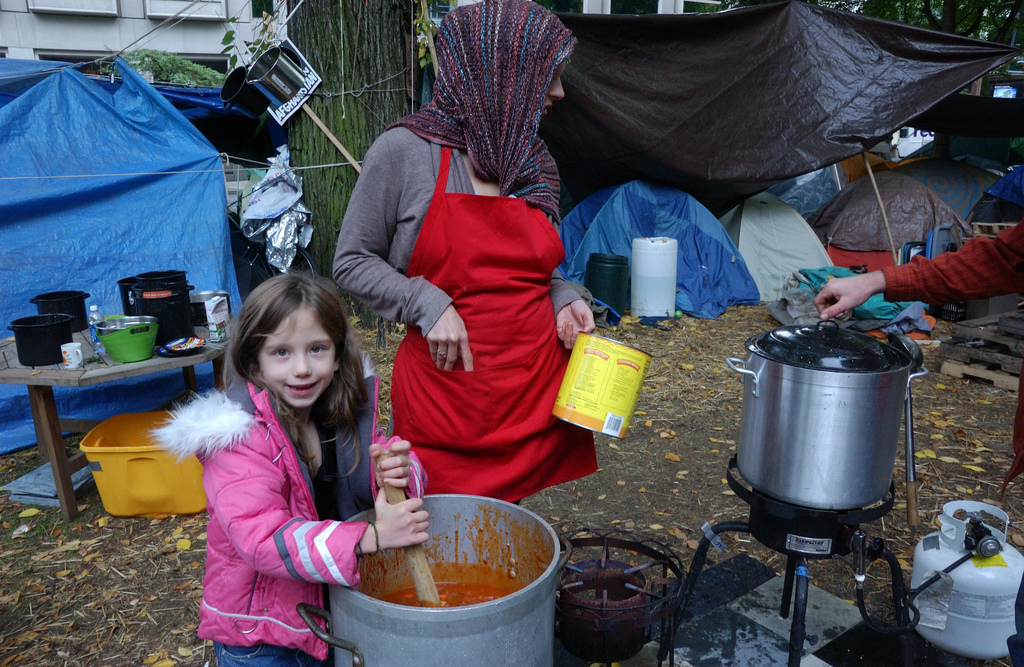 If you ask a number of people what is fair for a particular situation, you’ll probably get just as many answers. Luckily, at the Portland Occupation, collecting potential answers to hard questions is what we’re all about.

We have many things in large supply in the occupied parks of downtown Portland. We have a good deal of food, contributed in quantities large and small. We have eager helping hands to prepare the food, to clean the dishes afterward, and to plan the upcoming meals. We have volunteers of all sorts, working on projects ranging from web pages to legislation to power generation, who are hungry, and ready to eat. We have other friends and neighbors who are just as hungry, and whom we can invite to join us. And naturally, we have social and political opinion, ranging from old fashioned varietals, to spicy.

So if you’re down at the Portland Occupation, sitting on a bench with a hot bowl of soup, a slice of pizza, or even just a peanut butter sandwich, by all means, open up to your fellow diners around you, and share your opinions.

Wall Street is just one of the many topics you might discuss, as I have, with my fellow occupiers. That the greed of large shareholder-controlled banks was the watershed issue to bring us down here is well-recorded. But now that we’re out here, meeting each other, seeing who shares our opinions and concerns for the future, we’re discovering that is just the beginning.

We think that there is a problem with the way society is run. It’s not “the system”, or even that there is a 1%, as a symbol of general inequality. It’s more that there is a thread of greed that runs through our culture. Somehow, this greed has become okay. Over the course of a long degradation of the American Dream, we’ve come to believe that taking as much as one can when one can is an appropriate way to conduct our lives. There’s only one way to change this, of course: at that is to fight against it as we can, by countering this instinct with ethics on a case by case basis. 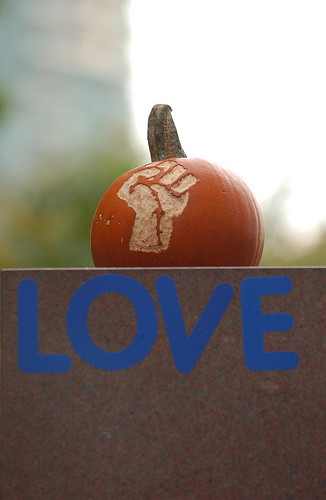 But there are as many sets of ethics in the world as there are recipes for soup. Take the soup we serve at the Occupation, for example. There are those who think that the kitchen should only serve soup to those who volunteer, by washing dishes, or sweeping up. They propose a quid pro quo sort of ethics, in which work is fairly rewarded. Then, there are those who think that food is a human right, and propose an ethics with a baseline of being well-fed, regardless of the person, aside from all judgment. There are people I’ve spoken to that have an opinion somewhere in the middle: they wouldn’t take food away from someone who needed it, but they wish that those people who are fed could be somehow convinced to work just a little bit, to help out those who are already working so hard for the occupation.

Who is right? I’m not going to tell you that. You’ll have to come down to the Occupation yourself, have something to eat, and then talk it out with your fellow diners, and come to your own conclusion. Personally, nothing gives me more pleasure than to stand in the dish washing line, on the side where I can watch the food service area during dinner. Watching the pots and pans emptied of good food onto people’s plates is payment enough for scrubbing for an hour or two. And to stand side by side others doing the same thing, and talking with them about how they feel about it, well, that’s a treat.

In my view, the brilliancy of the Portland Occupation is that we can experiment with these sorts of questions, in our own attempt to find and practice fairness. There is no threshold for getting to experience and be a part of this process. You only need to show up, and everyone else is here already. We’re figuring out what fairness looks like, once you’ve taken greed out of the equation. And we’re doing it one day at a time.

This piece is part of our theme week, about “Greed”, and what we’re doing about it. Whether it’s media, direct action, or simply food, this occupation is very much about finding solutions. We hope that you’ll join us, both here at The Portland Occupier, and down at the Portland Occupation.