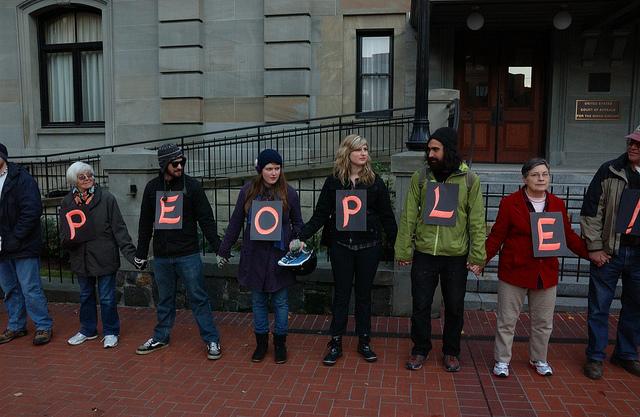 Detractors have tried to paint the Occupy movement with a narrow brush. The bristles in that brush consisting of dirty, unemployed drugged-out hippies of the modern age. Disaffected youth looking for a handout. Too lazy to work for a living. In truth, the Occupy movement is painted with a brush much more substantial than that.

True, the core of bristles consist of disaffected youth. But contrary to what some want us to believe, that core of youth is not looking for a handout. They are in fact looking for an opportunity. An opportunity to work at a job that pays more than a substandard wage or for many, an opportunity to find a job. An opportunity to get an education without having to work two jobs while they go to school or to be burdened with crushing debt for the next twenty years. They are looking for that glimmer of hope that they will not just be some corporate wage slave stuck in a dead end job and putting the bosses’ kids through college. They are not alone and have not been since the start.

If one takes the time to attend a march or a rally you will see that there are people in the crowd of all shapes and sizes, people of all colors, people of all ages, working people with many occupations. Doctors, lawyers, teachers, factory workers, union men and women, waiters and clerks. Veterans from the great war to the war in Afghanistan. People with jobs, people without jobs, people with homes, people without homes. Peaceniks and anarchists. People who love this country and people who don’t. All united in a common cause. All not afraid to get involved and to shout “WE WANT CHANGE”. Rejecting the status quo of a country and world run by a small minority who have the deck of life stacked in their favor. That small minority who always has a winning hand. That is the brush of the Occupy movement, ready to make it’s mark on the pages of history.

Here are some of the people I’ve met. They are the bristles of that brush.

Don Beal is a tall man, sixty-eight years young. He is a retired caterer who recently brought to the occupation enough ribs, sausage and chicken to feed 150 to 200 people. He said he has been active in politics for years and has been visiting the occupation since the first week. He also stated that he has marched three or four times and was waiting to march in support of Bank Transfer Day.

Andrew and Milo, ages 20 and 21 respectively, are full-time students working part-time jobs. Andrew is originally from Pennsylvania and Milo hails from Indianapolis. Both were in the camp volunteering their time doing outreach for the Icarus Project. It’s an organization that “…envisions a new culture and language that resonates with our actual experiences of ‘mental illness’ rather than trying to fit our lives into a conventional framework.” When I spoke to them they were getting ready to conduct a workshop. Both have been active at the Occupation since the first week but because of their busy schedules have only been able to volunteer once a week.

Eddie Ebacher is a retired veteran and producer of In YouR-Face TV. When I spoke to Eddie, he was manning the Veterans tent. He has been at the Occupation for twelve days. He told me that he was on his way back home to Sacramento when he missed his train. He ran across the Occupation and decided to stay because he thought it was a good cause, he saw that the veterans needed help and he decided to give it.

Steve Hughes is the state director for the Oregon Working Families Party. Steve is 33 years-old and originally hails from Olympia, Washington. He currently lives in Portland. He told me he became involved with the occupation because he feels that it is a true grassroots movement regarding issues of class and economic fairness. He feels that it needs to be supported. When I spoke to Steve he was acting as a march organizer, informational picketer and peacekeeper for the Bank Transfer Day march. Steve has lobbied for the creation of an Oregon State Bank in the legislature and has done research on rating credit unions in relation to whether they are locally based and owned as well as their local lending practices. His volunteer time varies.

Isabelle is 49 and a University professor from New York. She was marching with her brother from Wyoming in support of Bank transfer day. They were both in town visiting family. When I asked Isabelle why she was marching she told me because she felt there was injustice in this country that was frighteningly systematic. She was excited to be marching and felt that the Occupy movement was an authentic grass roots movement as opposed to the Tea Party. She felt that people have not been involved in the political process and that it is hard for people to figure out what being involved really means. She felt the the Occupation was a way for individuals to mobilize for political action by marching and demonstrating. She felt that the issues being generated and talked about in the mainstream media will have some people “running scared”.

Ted Clark is a 63 year-old retired product test engineer who worked in Hillsboro and lives in Tigard. He says he helps out in any way he can providing food, equipment and money. When I met him he was helping camp occupiers load trash into a roll off dumpster that had been delivered to the camp. He told me he is involved because he thinks that it is an important movement and he wants to see it grow and become more influential. He described his himself as a volunteer tourist and says that he is there a couple of times a week.

That is the truth of it. Don’t believe me? Come see for yourself, take a little time to visit your nearest occupation and talk to the people there. You have nothing to lose and everything to gain. This is your world too.

4 comments for “The Brush of History”