By K. Kendall, in conversation with Mary Nichols and Sandy Polishuk 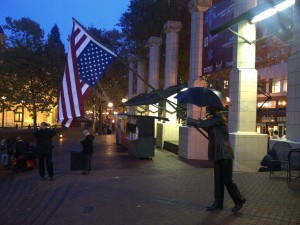 On 11/15/11, the night after eviction, Lucky and other Occupiers flew the flag of distress at dusk. Tribes and other Occupy refugees gathered in anticipation of the first scheduled assembly without a camp. At 7pm that night, the Tribes Caucus joined the Spokes Council. Caption and Photo by Mary Nichols.

–the distress of the families and loved ones of the 558 people a year who die in Oregon because they don’t have health insurance;

–the distress of one in four homeowners who are now “underwater” on their mortgages;

–the distress of 16.4 million children currently living in poverty in the USA, a country that for years proclaimed itself the “richest nation in the world”

–the distress of the 99% who suffer because of dwindling funds for education, lack of services for the mentally ill and elderly poor, lack of funding for arts, music, and physical education, lack of child care for working mothers, cuts in human services at every level…

because of the unbridled greed of bankers, financiers, and those who defend tax breaks for the very rich.

For many, these are times of great distress globally. Indian activist Arundhati Roy hopes the Occupy movement will prove itself to be not merely about conditions in the USA, but a “movement against an international system of global finance that is manufacturing levels of hunger and poverty on an unimaginable scale…” Perhaps we should fly every flag of every country in the world upside down.