“I talked with sergeants last night,” Simpson said. “It’s pretty unlikely we hit someone in the face with a baton.”

– Sgt. Simpson of the PPB

We should ask Sgt. Simpson about the back of the head.

At The Occupier, we take a firm stance against police brutality, and seek to expose this activity for the violence that it is. A glaring instance from the Occupation on December 3rd has been brought to our attention, though it is certainly not the only one from that night.

Sam Davis, of Portlandians.com, sends us four photos that show a sequence of police brutality, in which a protester is beaten with a baton, tackled to the ground, and then viciously jumped on, by whom Sam believe to be Officer McKinley of the Portland Police Bureau. We apologize for the graininess of the photos, but shooting night photography of high speed action is difficult. We feel these photos clearly show the events as Sam is describing (and we thank him for his work!)

“Officer (McKinley?) chases a man running away, repeatedly hitting him with a baton on the head and back. #1”

The second photo shows the officer grabbing the protester, while beating him with the baton. 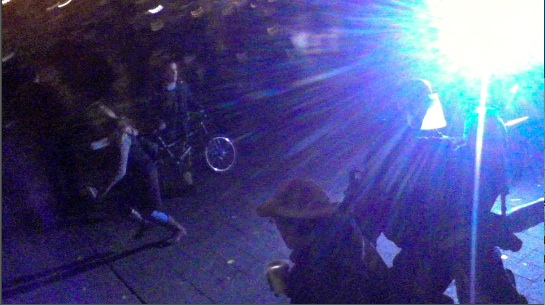 “Officer (McKinley?) chases a man running away, repeatedly hitting him with a baton on the head and back. #2”

The protester is tackled by the officer against a concrete wall, and a bicyclist standing nearby is knocked to the ground by other officers moving up the police line during the beating.

“After tackling the man into this concrete wall, he cuffs him while his fellow officers push a cyclist over.”

In the fourth photo, the officer’s feet can be clearly seen off the ground, as he jumps into the air to bring his armored knees down on the prone protester. 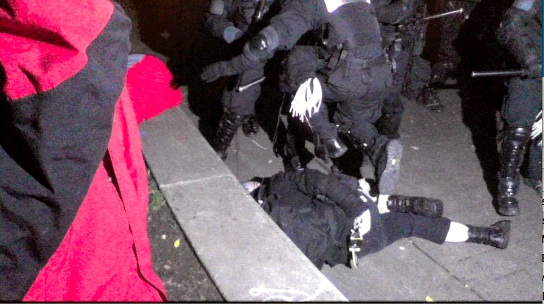 “Once the man is cuffed and laying on the concrete, the officer feels it’s necessary to drop a flying knee on him while his fellow officers stand by and let him.”