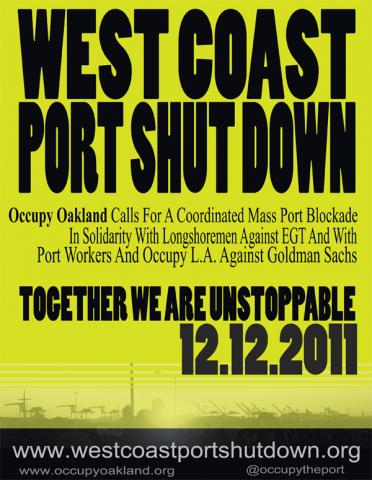 Companies like Goldman Sachs and Georgia-Pacific, owned by the union-busting Koch brothers, have been eroding Union member’s benefits and salaries along with the environment for long enough. For decades, these workers have been waiting for the right moment to rise up, to unite and say “ENOUGH!” once and for all, beginning on Dec. 12th.

On December 12th, Union members and Occupiers will stand in solidarity to shut down the ports as a sign of their unified strength. Up and down the entire West coast of America – from Alaska to California, along with the port of Houston in Texas (there’s even been rumors a-twittering of a Japanese railroad solidarity action), trade will stop and unified, they will clog the capitalist artery of Wall Street.

Although rank and file Union members are in support of this action and have been actively involved with the planning process from the beginning, the ILWU Union itself cannot show support. What’s disheartening is the lengths at which the ILWU Union will go to distance itself. Thankfully, during other recent moments in ILWU’s history, we can see their true colors shine through the current rhetoric.

It’s important to contrast the interview that ILWU Communications Director Craig Merrilees did with The Rick Smith Show during the Longview protests in September of this year and the interview found in the Guardian.co.uk today.

From the Guardian.co.uk article:

“This is being promoted by a group of people who apparently think they can call general strikes and workplace shutdowns without talking to workers and without involving the unions.”

As stated earlier, Union workers have been involved from the beginning. It seems that while Mr. Merrilees understands the plight of the worker he fails to understand the difference between Union workers and “The Union” as an institution. Which makes sense considering it isn’t in the interest of the ILWU Union to take a stand. The Union leadership have contracts to maintain. So to avoid conflict, the ILWU as an organization will take the position of appearing to be upset with the Dec 12th action organizers. Although Mr. Merrilees probably didn’t have to take the rhetoric this far to drive home his point…

“Merrilees said no one had contacted the ILWU to consult it over the shutdown, which he said was a ‘suicidal strategy for the Occupy group, that’s being driven by extremists that are driving away allies and marginalising the movement’.”

Jared Lorio, an organizer, stated later in the same article,

“[The lack of support from the ILWU] sheds light on the fact that our unions have been hamstrung and made ineffective by laws designed to curtail workers organising for their rights to better pay and conditions in this country.”

Which hits the nail on the head when looking back at the decades of erosion that have happened to labor regulations and union rules. Much of the progress that was made in the glory days of America’s industrial period has been undone because of organizations like ALEC, a group of some of the largest corporations in the world writing legislation for paid-off congressmen to sign into law; there is no justice. With jobs being shipped overseas to places where labor can continue being exploited, the Unions that are still operating are fearing for their collective lives. Stan Woods, an ILWU member, apologizes for the unfortunate lack of Union chutzpa –

The article then concludes with this bright note.

It looks like the December 12th Port Blockade will certainly be an exciting action, regardless of the outcome. Let’s hope we’re all standing on the right side. For all of our futures.

4 comments for “Which Side Are You On Boys (and Girls)?”