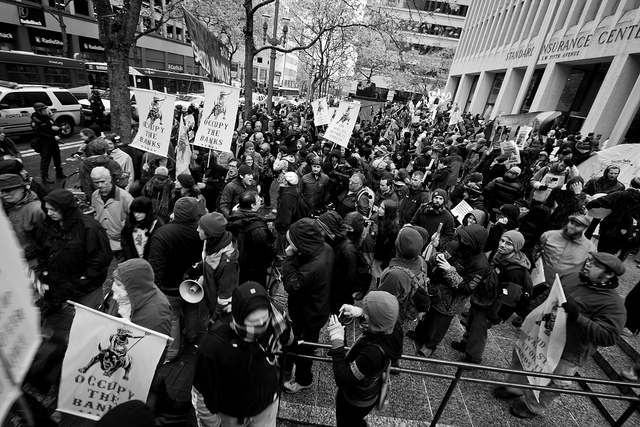 THE INCLUSIVENESS. In our mix there are a lot of differences– from
the driven middle class professional to the self-medicated person
numbing the effects of their homelessness through addiction. There are
extreme liberals and a few tea partiers. There are differences in
political priorities ranging from the desire to fix the system through
election reform to the belief that ending capitalism is the only way
out of this greedy mess. Miraculously, we’ve all stepped into the same
morphing container and are working hard to respect each other. And
given the extremes of the differences, the respect goes far beyond the
clashes.

THE PASSION. The driving energy of our desire for change has created
an unprecedented force of empowerment. At its center, it is heart-felt
and based on a common belief that we, with all our human shortcomings,
can make change happen with our voices, bodies, minds and resources.
And in its deepest and most profound places, with our love. That love
is demonstrated in the moments when the kitchen working group stood
strong in their commitment to feed everyone–no matter what, and when
demonstrators surrounded a man whose passion turned to an act of
violence and gently but strongly escorted him out of the crowd. It
happened when a young student called out for social workers and
psychologists to help wade through the depths of misunderstood human
misery he saw up close for the first time in his life.

THE COMMUNITY. The camp was a collective microcosm of our world, which
had to re-create itself. The city turned off the electricity and
closed the public bathrooms. We held meetings, cooked food and washed
dishes in the dark, in the rain and the cold and against the backdrop
of the city’s warm, lighted and often-empty buildings. Did this daunt
us? No, it put us on the edge where community is built with
interdependence, creativity and fortitude. I honor and applaud every
person who spent the night there and especially those with the
experience of living without homes who contributed to the meager
infrastructure directly from their experience. The engineering team
deserves a moment of appreciation. They worked with rope and scraps to
build the community home for hundreds of people living inches from
each other. I’m convinced that the problems were proportionally fewer
than we experience in our biological families.

THE GENEROSITY. Among us in this movement we have physical, spiritual
and human resources beyond imagining. I know a woman in her 60’s who
showed up almost every day to help wash the dishes. People drove up
with homemade casseroles, cakes and homegrown produce; restaurants and
stores donated enough food for hundreds; tarps and tents were bought
and delivered; a library was created with donated books; children were
read to at bedtime and a medical team was on site providing care every
day. When the camp was destroyed, a man opened the door of his home to
many of those without one. I read a survey that showed that the less
you have the more you are willing to give. My friends without homes
will tell you straight: if all you have are two ‘rollies’ (cigarettes
from scrap tobacco) and someone needs one, you share.

THE COMMITMENT TO A NEW PROCESS. We have been thoroughly trained in
our society to think and act as individuals. The way decisions are
made in our country under the smoke and mirrors of so-called democracy
needs to be replaced with a greater inclusive democratic process. The
commitment to consensus decision-making may be one of the strongest
forces of change we can develop. It is hard, messy and requires
extreme patience. But we are practicing it as we stumble, fall and get
up again with new ideas. I watched a decision form from a 300-strong
group moment of light-bulb-going-on realization we hardly noticed had
happened. Whether we see it or not, the process is providing an open
space for collective, natural synergy to work.

THE PRACTICE. I was once a professional juggler. To learn to keep
three clubs in the air was a slow, step-by-step process of mastery.
This movement is weeks new and we are struggling to catch our flow as
we show up and learn. We are developing the practices we’ll need for a
new future. They are worth the frustration and aggravation. Many of us
are committed to practicing even if we can’t see much light in the
tunnel.

THE KINDNESS. There have been numerous acts of kindness. I watched a
brother put his arms around an angry man who probably hasn’t been
heard very often. And he listened. The gentle struggle to understand,
the donations of warm socks and coats, the smiles, the patience and the
laughter haven’t always come easy. But kindness is another one of
those skills, which have to be developed and honed. The movement
provides a new space for the practice.

THE DEDICATION. People are showing up for rallies, demonstrations and
marches. Just after midnight on the cold and rainy night before the
police destroyed the camp, I looked around and we suddenly were over
5,000 strong. Some are willing to get arrested for those who have jobs
and can’t afford to lose them. Some were willing to camp out to secure
our infrastructure. The camp wasn’t just tents. It was a base of
communication, information, resource gathering, friendship and
connection we are still struggling to re-form.

THE TRANSFORMATION. I had the extreme privilege of hearing a young
man’s personal story. He is 18, was homeless and a disillusioned
wanderer. In the midst of the camp’s community, he discovered his
passion for problem solving and was working to try to deal with the
camp’s gray water when it was destroyed. The movement is now his life,
his purpose and when he pulled down his handkerchief mask to smile, it
was wide and true. He is a symbol of the change I hope for because it
has to happen one heart at a time to be true and lasting.

THE RESILIENCE. The commitment I’ve witnessed is deep and strong. What
has been learned and what is being learned will keep us moving and
growing. We will be set back. The more we spread and grow, the more
repression will come as we’ve witnessed in every non-violent movement
before us. It’s important to remember, in terms of human history that
the practice of non-violence is relatively new. There’s still a lot to
be explored and developed. The struggle for change will require the
resilience of those who are beaten and pepper-sprayed; the strength to
keep meeting when it seems excruciating; the support of meditation and
prayers; and the creative and artistic inspiration to nourish and keep
our spirit growing. Mostly, it will take the work and dedication that
truly comes from a resilient heart.

3 comments for “Ten Things I Love about Occupy Portland”