This article is one of two companion pieces on The Occupier, discussing the larger strategic questions of the Occupation movement. The entirety of Occupation strategy is not reducible to these two points of view, but we hope these will start a discussion in two different, non-symmetric veins about “big picture” issues. 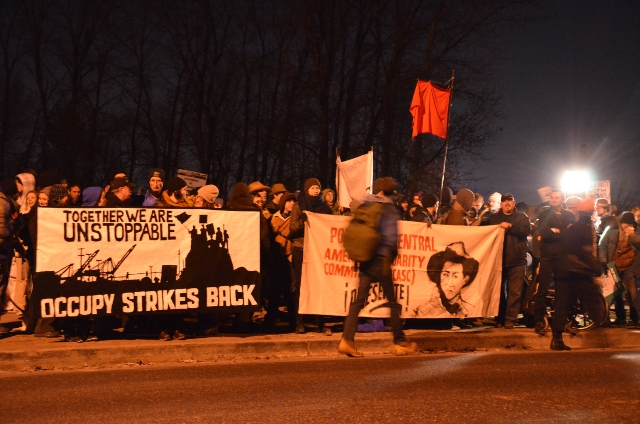 “Whatever is to be done about the black bloc?”

You might not hear this question asked aloud, but you can certainly hear the consternation in certain protesters voices.

First of all, “black bloc” is a tactic, and not a thing. It isn’t a politics at all, not a street gang, and not a collective. Here’s Wikipedia on the origin of the black bloc:

This tactic was developed following increased use of police force following the 1977 Brokdorf demonstration by the German police in 1980, particularly aimed at anti-nuclear activists and squatters. Key areas for this development were Hafenstraße, Hamburg, and Kreuzberg, Berlin. These were social spaces occupied by dissidents who preferred to create their own social institutions based on communal living and alternative community centres. In June 1980, the German Police forcefully evicted the Free Republic of Wendland, an anti-nuclear protest camp in Gorleben, Wendland. This attack on 5,000 peaceful protesters led many former pacifists to become willing to use violent methods. By December 1980 the Berlin City Government organised an escalating cycle of mass arrests, followed by other local authorities across West Germany. The squatters resisted by opening new squats, as the old ones were evicted. Following the mass arrest of squatters in Freiburg, demonstrations were held in their support in many German cities. The day was dubbed Black Friday following a demonstration in Berlin at which between 15,000 to 20,000 people took to the streets and destroyed an expensive shopping area. The tactic of wearing identical black clothes and masks meant that the autonomen were better able to resist the police and elude identification. The German media labeled them der schwarze Block (“the black block”). In the Netherlands, similar militant resistance developed, but the wearing of ski-masks was less prevalent and the phrase Black Helmet Brigade was used.

As can be understood by anyone who has stood in the streets attempting to exercise their first amendment rights and been opposed by police wearing black armor, helmets, face-masks, and hiding their badges and faces as they swing clubs and deploy tear gas and pepper spray upon masses of people–anonymity is a powerful tool. The police have better tools, and more of them. They have more money, and can afford to have vast databases of photos, fingerprints, and other biometric information (did you know they retina scanned arrested occupation protesters in New York City? It’s true.) They can afford to follow people home, raid living spaces on trumped up charges, destroy personal property without worry of criminal charges, and generally persecute people with taxpayer money. So if ever a page was to be taken from the police’s playbook in order to counter their oppressive force, anonymity would be it. Whether one is planning civil disobedience or simply speaking on an unpopular subject, anonymity is security: simply because identification can mean persecution.

But anonymity is not what causes the tone in people’s voices when they look out in ire at a line of young people wearing black hoodies; it’s what they represent to those that would click their tongues. It’s what people see when they see a group of people all dressed in a way that visibly signifies a tactic. What we are hearing in the grumbling is a tactical disagreement. An unsettled, discouraging, disgruntlement coming from the gut, beneath the crossed arms and set jaw. Irritation felt by people, irritation towards “the black bloc” who have attended their protest.

If there is anything to be said about the Occupation protests around the world, it is that there is hardly a unifying political category to it. It is a movement of outrage, of democratic alternative, and of change: not of a particular political system. So if we are not a unified political movement, how would we be a movement with a singular, limited set of tactics? There is not a single tactic that can unite what is specifically a widespread and diverse experiment in building societal change. From the very beginning, there have been people who march, and others who commit civil disobedience. There are people who have slept outside, and those that work from their offices on their off-hours. There are those who have something to give, and there are those with nothing left to lose. The strength of the movement is the number of threads in this network, pulling in different directions, creating a plane: a surface for us to stand on, finally, after such a long time of waiting. We have discovered each other, and found in our differences, is our strength.

What this strength looks like in reality is not the sublime narrative of an all-American automobile commercial. The occupation is not about marketing. We have a message, but it is fraught with facts, and spoken by actual people on the corners of the streets, by a large number of actual people. Some of them are speaking now for the first time. Some of them are speaking now after going unheard for a long time. And yet others have been speaking consistently, and are accustomed to speaking a certain way, for certain people to hear. This great conversation that we are having—which, after all, is the process of real democracy—will never be a single statement, slogan, or system. This strength that we have discovered is that despite what our “leaders” tell us, we are actually quite good at having this conversation, and we don’t need “representation” to do it. There is a new sort of solidarity in our unique way of working with anarchists, union activists, liberal organizers, homeless advocates, student groups, and social workers. We are the people who know how to help others without changing them, and engaging with the power they have.

But it’s not easy, and that we know as well. We have to negotiate with the different egos involved, and find the points at which our methods and movements match. It’s an act of tolerance, to be the conduit through which this power flows. Individuality is not the unrestrained satisfaction of our wills. It is not getting our way all the time: it is fitting our way into the ways of others, for the better achievement of both. The human species is not a “war of all against all”, nor is it “submission of the individual to the nation, mass, or cause”. It is the conversation, not just between two sides, but between an impossibly large multitude. But this is all that it will always be, and the difficulties are none but our own.

And so, the question is not “What is to be done about the black bloc?” The question is, what will we do with the black bloc, as one tactic among a diversity? How will we work with the people behind the masks, and how will they work with us who decide not to wear them? The many people that make our movement are not reducible to tactics. There is only us, regardless of what we wear, or what we do. And what we do together, is what really matters.

18 comments for “The Real ‘Black Bloc Question’ We Must Ask”