Hey everybody – Illona here. The Portland Occupier is branching out to support our sister occupations in Cascadia. Tonight, I’ll be reporting from Occupy Eugene on their anti-eviction action night. There isn’t a set deadline for the eviction, as reported in the Register Guard,

Eugene police said they have no firm deadline for campers’ departure. “We’re not drawing a line in the sand because we know it’s going to take time,” Capt. Rich Stronach said.

Regardless of the lack of official deadline,  over the past several days, Occupiers have witnessed police action after action meant to destroy the camp. Occupiers are not deterred. Far from it. Tonight they are gearing up for what appears to be a fantastic night of celebration. The end of phase one and the beginning of phase two. And it will be sure to keep the oppressive forces on their toes. I hope to be reporting action as it happens, so stay tuned tonight for LIVE FROM EUGENE. It’s more fun than whatever is on television, guaranteed. Tell your friends.

8:27pm Liveblog is signing off for tonight. Occupy Eugene is safe again in their camp. Will the police kick out the remaining campers during Christmas in an act of heartless Grinch-like apathy? Or will the City Hall have a change of heart in a Christmas miracle. Stay tuned to find out! #occupyeugene

7:40pm Police confirm that no one is getting arrested tonight. Read the full report from Occupy Eugene.

7:32pm Police say Geneva the tree-sitter can stay in the tree, cutting short the Occupy Eugene band’s version of Queen’s “We Will Rock You”.

…They are evicting our camp right before Christmas. I will not come down willingly. I will stay up here if I have to. 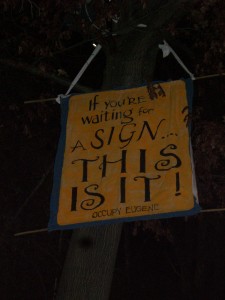 7:02pm – Tree-sitting, a famous form of protest here in Eugene has begun at Occupy Eugene. One tree-sitter is holding a sign that reads, “If you’re waiting for a sign, this is it”. Drumming has also begun.

6:47pm – Earlier, twitter rumors were circulating that fencing would be put around camp by noon today, however according to the livestream report, fences will not be erected until tomorrow.

Occupying since October 15, with four moves under their belts, Occupy Eugene is possibly the biggest remaining occupation on the West Coast with over 150 tents, 2 geodesic domes, and a cabin.

Two days ago, the camping ban exemption given to Occupy Eugene by the City Council, slated to last until January 11th, was revoked during an emergency session in response to a violent altercation that occurred at camp between a non-occupier and occupier. A police tactic, commonly reported by many Occupations, has been for police officers to drop off belligerent drunks at the Occupy camps knowing full well that these intoxicated individuals will stir up trouble. The latest alleged drop-off led to a near-homicidal incident which in turn led to the emergency City Hall session calling for an end to Occupy Eugene.

They closed the park, posting signs on everyone’s tents. Anyone in the park is now considered trespassing, however police are not currently enforcing the law.

Sources say that yesterday the police asked that minors and pets be removed from the site. Today, City parks workers were on site hauling off tarps and tents, some abandoned and some not, with upset occupiers asking “Why are you taking my things?” Occupy Eugene is planning on creative resistance tonight, something folks here know a great deal about.

Eugene’s history over the past two decades is splattered with resistance. Their Wikipedia entry even has a whole section on Anarchy in Eugene:

During the late 1990s and early years of the 2000s (decade), Eugene contained a community of anarchists situated in the Whiteaker neighborhood of west Eugene. This community gained international notoriety in 1999, due to its perceived role in the protests at the WTO Conference in Seattle that year.[37] Following those protests, then-mayor Jim Torrey described the city as “the anarchist capital of the United States.”[37]

The Eugene anarchist movement grew out of the treesits and forest defense camps of the 1990s. Demonstrations and riots in Eugene have since occurred [38] notably during a Reclaim the Streets event on June 18, 1999, when protesters blocked downtown streets and smashed the windows of three stores. Some rioters threw stones and bottles at police.[39]

One notable set of events in Eugene’s anarchist community’s history was the “mud people’s” protest.[40] On that day, the participants noticed two blocks of trees, in a parking lot near the downtown area, were slated for removal the following Sunday. The ensuing tree sitting protest on June 1, 1997 was reported widely, as it lasted several hours before the crowd became violent[citation needed] and the police responded with pepper spray. A lawsuit by protesters against police response was settled five years later. [41]

The ongoing trials of accused “eco-terrorists” continue to keep Eugene in the same spotlight.[42]

Historically, Eugene has fostered the anarcho-primitivist movement. John Zerzan, a Eugene resident, is a editor of the Green Anarchy magazine, and has been associated with the growth of the green anarchist movement and associated with the philosophy behind black bloc tactics that were later found in the Seattle riots.[43][44]

The article fails to mention that one of the pepper-spray incidents during the “mud people’s” protest was a gruesome affair, with police pulling down a man from the tree, tearing open his pants and pepper-spraying him in the genitals.

As a part of the Occupy Wall St movement, Occupy Eugene is committed to non-violence and will use creative resistance in a non-violent manner.

1 comment for “Liveblog: LIVE FROM EUGENE on Anti-Eviction Action Night”