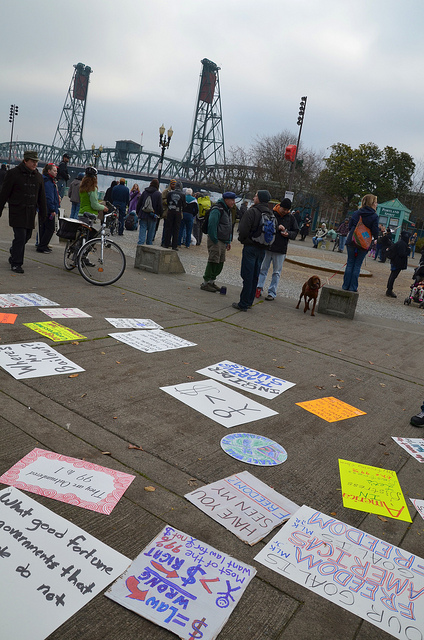 To successfully change America, the people must win control over our government. It is government where the changes must ultimately happen because government sets the rules that all the rest of us live by, whether we are stock brokers or stockroom clerks, bankers or barristas, corporations or small businesses or homeless. Corporations and Wall Street have done nothing that government didn’t let them do. We have to change the rules.

Our nation is well equipped with powerful statements of democracy, liberty, and justice. We have a Declaration of Independence; we have a Constitution; we do not need to write new ones. We need to force our government to honor and extend the principles we have already established, principles that thousands of Americans have argued about, fought for and died for over the last two centuries.

Occupy must not be captured by narrow interests and lose sight of its goals. If we are fighting for the 99%, then we must stand for principles that most of the 99%, and nearly all of us, will agree with. We cannot win a fight for democracy unless we stay focused on what we’re working for, remain unified, and have the support of the majority of the public. We must strive to avoid fractious issues and fighting battles we cannot win.

Occupy Portland needs a simple document that affirms the right of the people to govern and lays down the basic principles on which we all can stand. We can and should evaluate many specific proposals from all of our supporters and take action to support the ones that match our principles, and oppose those that conflict, whether in our city, state, or nation. Issues change; tactics change; principles remain.

I propose a statement of principles that I hope we can modify and agree on unanimously. They will help the public understand why we are occupying our streets, our governments, and our oppressors. And they will help us keep our eye on the ball. This is a fight we have to win.

A Statement of Principles

Occupy Portland is fighting for a government that is controlled by and serves the needs of all Americans, providing liberty, justice, protection and equality of opportunity for all of us and our heirs. We are fighting to complete the vision that our ancestors conceived in 1776, ratified in 1789, fought to preserve in 1861 and to defend in 1941. These are not new ideas.

We stand for government of, by, and for the people. We demand that the power of Government be returned to the people, with democratic elections free from unfair influence by money, false information, and impediments to voting.

We stand for government that uses its power only for the public good. We demand an end to the use of public money, policies and resources to unfairly enrich, preserve and protect banks, corporations and favored individuals, including lawmakers.

We stand for government that promotes equality of opportunity. We demand the right to live and work in a safe, clean environment, to have access to housing and health care and education we can afford, and to earn a living wage.

We stand for government that guarantees justice for all. We demand an end to a legal system that lets corporations flaunt the law repeatedly and escape punishment with inconsequential fines. We demand an end to the government’s war on its own people, a war that tramps on civil rights and has put more of our citizens in jail than any other country in the world.

We stand for government that protects and preserves our common wealth for the generations of Americans that follow us. We demand an end to rampant destruction and privatization of our waters and lands, forests and fisheries, for the enrichment of private interests.

Occupy Portland will fight for policies at all levels of government that advance our principles, and we will fight to oppose those that conflict with them.

I wish to acknowledge the hard work of Owen Sanders whose Declaration Draft inspired this effort. His Declaration contains powerful words and specific ideas that we should spread and use.

You may email John Springer at [email protected]

4 comments for “Goals for Occupy Portland”