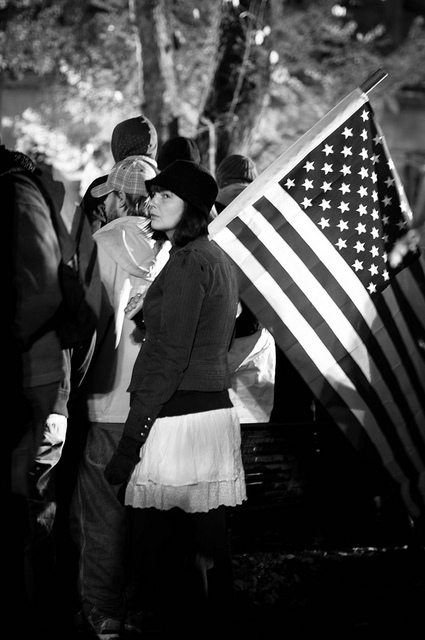 Over the past few months several of Occupy Portland’s committees have been busy working on legislative items to enact far-reaching social and political changes. These groups are now emerging from the background in the New Year with a number of events and initiatives to advocate large-scale change for the 99%.

Back in October, two weeks into its encampment the General Assembly passed its first political action to endorse Instant Runoff Voting for local elections, a system which reduces partisan politics and ensures more representative, cheaper elections. A working group from Occupy Portland has subsequently joined a sub-committee of the City of Portland’s Charter Review Commission to craft such a proposal that should make it on the November 2012 ballot.

Soon after that the Assembly endorsed ending corporate personhood, and the Solutions Committee is presently working on the passage of a city and statewide resolution to reserve the rights of people only for humans and advocate for increased community rights. Corporate Personhood and subsequent court rulings such as “Citizens United” have given wealthy corporations and individuals the ability to overwhelm our democracy with money. The solutions committee has mobilized a postcard drive and petition with already 700 signatures pushing for stronger language in city hall’s planned resolution against corporate personhood.

The Solutions Committee is a crowd-sourced, open-source, fully transparent progressive policy think tank dedicated to developing concrete and tangible approaches to achieving the social goals of the 99%. We are focused upon two approaches: (1) The drafting of ballot measures and model legislation that implements policies that the 99% desire, and (2) Identifying and planning campaigns of direct political action to persuade corporate and governmental bodies to adopt or modify policies in a manner sought by the 99%.

Several events will be held to highlight and pursue these initiatives. On January 8 a Solutions Forum will be held at Project Grow (2124 N Williams Ave) at 3:30pm to kick off this year’s projects. The forum is seeking to inform, engage and involve the public in selecting and furthering Occupy Portland’s 2012 policy initiatives.

January 20 is the one-year anniversary of the Citizens United decision, and Occupy Portland is planning a number of events to raise awareness of this ruling and the efforts to repeal it, including a nationwide day of action to occupy the courts together with Move to Amend.

On January 27 Occupy Portland will be hosting a forum for candidates of Portland’s Mayor and City Commissioners, and Occupy groups from across Oregon are planning an occupation at the legislature for February.