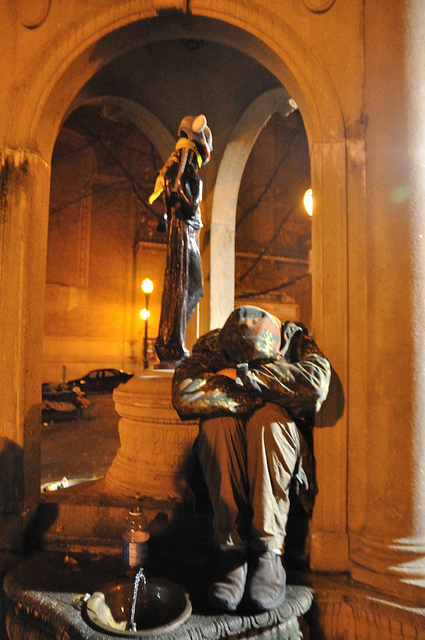 Occupy is, at its root, a gallant, worldwide fight for survival as sentient beings; a battle for human liberties for the working/middle class and poor. It is a street fight against the judiciary, the legislative branch, and the media (who has also, for the most part, been sadly complicit in this war against the greater populace).

If you go hunting and shoot your hunting partner, as Dick Cheney did, that can be overlooked. Why? Because you are powerful, rich and above the law. Maybe you even make the laws, existing within the psychopathic corporate culture that birthed you. Many of these One Percenters were schooled in New York and Boston. I am not insulting these exclusive institutions or the progeny of these educational psychopath factories. I do have a problem with the pampered and privileged class wanting a pecking order in place for the rest of us outside their capitalized golden garden.

Let’s be honest: the guy with the biggest muscles at the beach gets to kick sand in your face and gets the trophy girl over you. That is why there are so many hurdles when you, the little guy, want to take a vacation or visit mom and must go to an airport, take your shoes off, have your luggage and your person x-rayed, and be felt up by Federal TSA goons. You certainly can’t bring a rifle or a .38 Special in your carry on luggage. Don’t utter the word “bomb” or read the Anarchists Cookbook on a commercial airline, or let any quirky words or behavior slip that may cause some overworked airline worker to red flag you. You can’t let your hair down like Richard Branson on his private airline or Hugh Hefner.

The real money doesn’t want you to know or see how good they have it. Their pecking order must, by definition, oppress us. They will tell you that if you want extra privileges then you must earn it and pay for it, but the deck is stacked against us. We can’t smoke in a bar or even inside our own apartment. Do you think that these billionaires have the same restrictions in their own private clubs or properties? It has been a relentless grab of rights that a psychopathic One Percent has taken. Try bringing a toy gun to school. We used to do these things. We used to smash pumpkins. Now, in some areas they call this property crime. It’s no wonder people want to write graffiti on buildings. People want to stand out and be counted in the pecking order. It’s human.

Measure 11 in Oregon, establishing minimum sentencing, is a really bad law, and another rights grab by the courts: the right hand of the One Percent. Now, children in Portland don’t know much about how to fight or defend themselves, and if they do, they are put in a cage for a long time. Plus how could a Portlander travel to Baltimore and walk the streets with attitude and not get beaten up and left for dead? People know in most parts of the country that you can’t say anything to anyone and if you do, you pay the piper. I would never call Hulk Hogan a punk. He would probably beat the snot out of me if I did. Here, you have the freedom to insult anyone of any size and Measure 11 will protect you. Hooray for false protection of our fair city. But, it doesn’t prepare our young people for responsibility for their behaviors in the other colonies and beyond.

Not too many years ago, near Pioneer Square a young man shot another young man because he was convinced this other man had stolen his pills. What is there left for thrills, but drugs for these young men? I don’t know. Strip clubs? He can’t hit the guy in the nose or wrestle him to the ground and assert his position in the natural human pecking order here. The courts with measure 11 has taken that option out of the equation. In other places, if you have a conflict with someone you can fight asserting your position of respect. You aren’t left with unresolved rage, and left emotionally bleeding as part of the damaged rubble. Instead your actions may give you status even as a champion of your realm.

The 1% make the effort to sell a petty, ungenerous attitude toward us all. “we must show a profit!”, but there is no profit in conflict resolution, only prisons and wars, mortuaries and counsellors. It hasn’t worked. It must be done away with. That’s why we are here. There has been little to no support for other pursuits unless we bring to them a princely dividend every quarter. Schools are being cut, little league, the arts all on the chopping block….But, at what cost for profits? Who really profits? What of tilling the soil, to harvest fruit, which requires time and investment? What of building a strong foundation for real profit? Many reasonable minds would argue that profit, historically, doesn’t materialize from out of the ether.

We are inundated with stories about Stalin’s Russia or Hitler’s Nazi Germany and how horrible life was back then, how they took from the different or the bold. But why should we have to keep drumming up that wretched history when there is much to explain about the maladaptive state of our society today? Is history trying to tell us something or are they just throwing our continued bondage in our faces, to be told you have won your freedom as an individual and then have our hands tied at every turn? If I had a choice, I might choose the gas chamber at Auschwitz if nobody wanted to stand up and fight.

It’s all take and no give. NDAA ,SOPA ,PIPA ,SWAT, DEA, FCC: the game isn’t just rigged, it’s frozen. It freezes out our individuality and creativity as unique and wondrous creatures.We’re art -works in progress, every one of us. Marlon Brando tried to talk about it. Marlon Brando at the academy awards used that woman to speak on the plight of the Native American as a warning to us all. Whatever the Flower Power generation gave us, free love, domestic partnership, co-ed dorms, women’s empowerment, gay rights, rights of women’s bodies with regards to abortion, Civil Rights, etc. your rights will always be in danger of being stolen by those who were well trained by the Corporate Psychopathy. It’s ruthless and indiscriminate, an enemy armored tank. Its one directive is to run over you and I, and then pick at our dead flesh like vultures.

Catch phrases like “homeland security”, “livability”, “community organizing” and “patriotism” are just more smoke screens for their real agenda. We have nothing if we can’t be the captains of our destiny. I think I am going to go out and break the law when the rain stops, kick back and drink a beer in my area public park without a permit from the city. I feel like living large today. Stick a fork in me.