“Think Globally Act Locally” …one of my favorite bumper stickers of all time, short simple and sweet. Time Magazine‘s person of the year for 2011 was The Protestor. Protest: a global phenomenon that started with Mohamed Bouazizi’s self immolation to protest his treatment at the hands of a local official in Tunisia. Started locally and spread globally, Bouazizi’s one-man protest became the spark that ignited the flame known as the Arab Spring. The flame of that protest has since spread from country to country not only in the Middle East but all across the globe empowering and energizing people everywhere to speak out against the perceived wrongs globally, regionally and locally.

In America that flame burns in the hearts of Occupiers who first spoke out by occupying public spaces in cities and local municipalities across the country. Most of the encampments have been forcibly disbanded now, but the protesters have not. Portland is a prime example. A space has been procured and the work for change goes on and will continue to go on as long as change is needed. 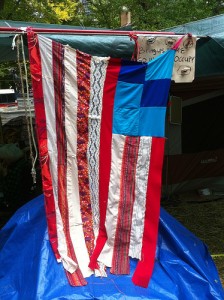 How to effect that change? If there is one thing I have learned in my life it is that if one is to agitate for change it is not sufficient to state the need for change or to complain about what must be changed; it is also necessary to offer solutions for that change. If solutions are not offered then any argument put forth will be discounted, discredited and denied. No one will listen, all that will be accomplished is that the messenger will be shot. To a large extent this is what happened to the Occupy Movement in the fall of 2011.

It is clear the problems have been defined, now what about the solutions? Think globally, act locally. It is clear we are faced with a global problem of a small number of individuals controlling most of the world resources of money, material and government. To successfully oppose this phenomenon and bring greater social and economic opportunity to the 99% all three avenues have to be addressed.

It is said that all change is local. It is also said that change comes from within and without. One of the local ways that change can come from within and without is by involvement with elected officials or people who aspire to that position. This Friday and Saturday there will be two chances to be a part of that change. On Friday, January 27th, a local People’s Candidate Forum is taking place. Candidates for mayor and city council have been invited and will be taking questions. Seating is limited, but Livestream will be covering the event for those who would like to tune in. For more information, see the Portland Wiki.

This Saturday, a much larger “Voices of the City: Portland’s 2012 Town Hall” meeting will be taking place at Portland State University. All the mayoral and city council candidates have been invited.

The thing about government is that it happens no matter how we may feel about it. Because of this we all have a choice. We can simply complain and be ignored by that government or we can become involved in the process and offer solutions. Please note: Occupy Portland does not and will not endorse any political parties or candidates. We continue to encourage people to take nonviolent direct action beyond voting and the electoral system.