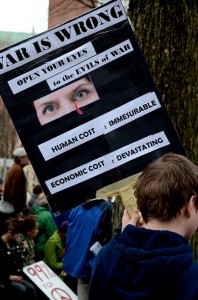 Rarely does a book show the history of nonviolence for thousands of years, explain the Just War Theory clearly, correct the understanding of Jesus’ radical peace and justice statements that have been watered down by confused Christians, and help readers imagine ways of unbalancing systems of unjust power in which they do not become just like those who abuse power. Engaging the Powers, by theologian Walter Wink is such a book.

In the book, acts of civil disobedience are shared from 1350 B.C.E. on down to modern times. There are potent examples, such as when Hebrew midwives refuse to slaughter Hebrew babies on the orders of Pharaoh. Christians are killed for disturbing the peace and refusing to worship Caesar or serve in the military for three hundred years. Jews protest the image of Gaius Caligula being put in the Jerusalem Temple. They throw themselves to the ground saying they would rather die than go along with this command. The Underground Railroad helps slaves escape southern slave owners. Henry David Thoreau is jailed for refusing to pay taxes that would go to support a war. Women block cannons in Paris and stand between fighting parties. The women’s suffrage movement gains the right to vote for women after many are jailed and some die in the 75-year struggle. Palestinians launch a six-month strike after losing their homes and land to the Israeli settlers. A man stands in front of a tank in Beijing during a demonstration for freedom. And now, in this long line of nonviolent actions, the Occupy movement worldwide confronts the One Percent with the needs of the Ninety-Nine Percent. This is a great read to ground the Occupy Movement in its own place in nonviolent resistant history and in soul force, or satyagraha.

The path of nonviolence is ancient, but these actions are not often taught in our schools. The war for independence from England and World War II are taught, but thousands of years of nonviolent actions usually go unmentioned in the classroom.

The goal of the nonviolent action is to unbalance the powers and principalities so abusers stop to think about their behaviors and changes their actions toward those they abuse. Nonviolent actions go as far back as the prophets in ancient Israel trying to unbalance the wealthy religious elite on behalf of the poor and oppressed. We see it in the actions of Jesus teaching peasants to take back power nonviolently from Rome. “Turn the other cheek” means unbalance the abuser, not be a patsy as Christians were taught. Those who learned from Jesus and other nonviolent leaders such as Gandhi and Martin Luther King, Jr. have carried on this tradition. War is fought with the notion that battle will bring peace. Wink puts forth the notion that justice brings peace. This is the struggle with the “empire,” we have to nonviolently get those in power to work for justice so that we might have peace. This book helps so well to frame the struggle.