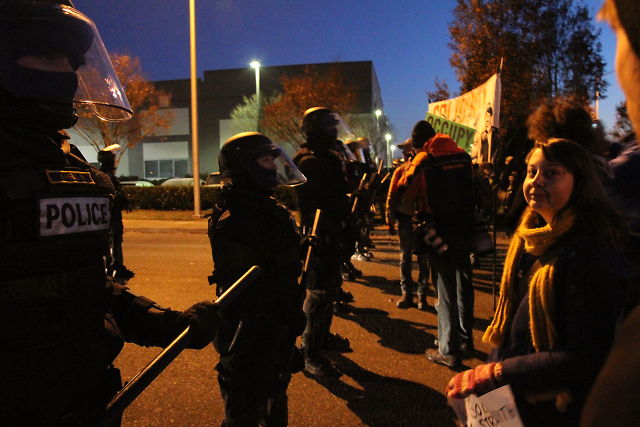 This website does not advocate or suggest any specific act. This essay was crafted and published as solely a piece of rhetoric, and it ought to be interpreted as nothing else.

Kettling is the law enforcement tactic of herding protesters into a confined area so that the protesters cannot avoid arrest. This tactic was seen on October 1st in New York when police escorted protesters onto the Brooklyn bridge and then used orange netting to divert them into traffic, after which they illegally arrested 700 protesters. This tactic was also recently used to prevent Occupy Oakland from occupying a vacant convention center in the city of Oakland, resulting in 400 arrests.

In the event of a declared unlawful assembly, it is the general policy of the OPD to use multiple simultaneous arrests to deal with a non-violent demonstration that fails to disperse and voluntarily submits to arrest as a form of political protest rather than dispersing the demonstrators by using weapons or force beyond that necessary to make the arrests.

Here we see that the preferred policy of Oakland PD in response to demonstrators is to make mass arrests, which requires the use of the tactic of kettling. The Oakland PD training manual for crowd control goes on to state:

When the only violation present is unlawful assembly, the crowd should be given an opportunity to disperse rather than face arrest.

One of the first things any law student learns, and which laymen must also learn, is that there’s a huge difference between right and wrong, and the law.

As Occupy continues, law enforcement will escalate the level of force used against it. It will seek to raise the level of arrests made. In the infancy of Occupy, many Occupiers viewed arrest as a badge of honor and distinction, but rational tactics demand that Occupiers avoid arrest. Arrests of protesters is how law enforcement causes attrition.

2.a The action or process of rubbing away, wearing or grinding down, by friction.
2.b Military. The wearing down of the enemy’s strength and morale by unremitting harassment, especially in phrase. war of attrition.

Once a protester is arrested, law enforcement and the courts bring to bear the pressures that cause attrition. Repeated court dates, exorbitant fines, legal expenses, probation, incarceration, prolonged uncertainty and fear, etc., which lasts over a period of months, is designed to wear down the protesters will to resist. Occupiers must develop strategy to mitigate the capacity of kettling to result in mass arrests, and thereby reduce the losses caused by attrition.

When law enforcement kettles protesters, it is reliant upon tightly knit organization, and riot police functioning as a unit (for an in-depth analysis of the strengths and weaknesses of this tactic, please see this article). Riot police form a phalanx that denies protesters a means of egress from the “kettle”. The tactical response of the protesters, which rely upon the strength of disorganization, is to disrupt the organization of the police phalanx. Confusion and disarray must be introduced into the equation. 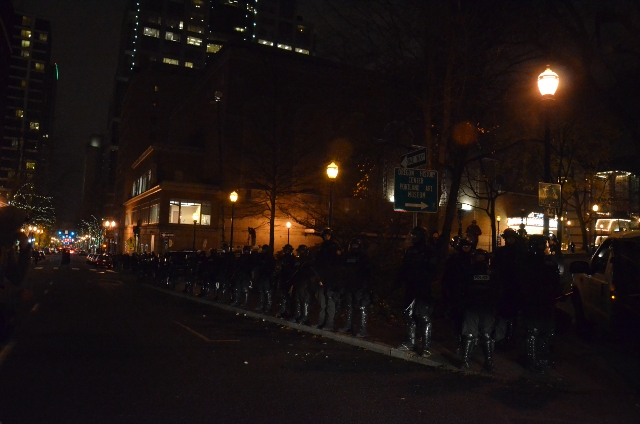 Visibility of riot police can be greatly reduced by the use of flashlights and toy smoke devices. If a protest takes place at night, large numbers of protesters shining flashlights directly into the eyes of the riot police will effectively blind them. To compliment this tactic, or to be employed by itself, toy smoke devices should be utilized to further limit visibility (Note: windy conditions will limit effectiveness). Toy smoke devices can be legally purchased in many areas. However, toy smoke devices that function in wet conditions can be easily manufactured with a few legally available ingredients at a fraction of the cost. Instructions for the production of toy smoke devices given below. Using instructions below, ten to twenty of the devices should be used when complete cover is necessary. (NOTE: This device doesn’t explode or cause bodily injury to anyone, so it is a valid tool in the arsenal of non-violent protest.)

The use of toy smoke devices also reduces the visibility of protesters, but the protesters, not being trained components comprising a tightly organized military unit, rely upon disorganization as their primary strength; a strength derived by a time honored rule of military engagement: the tactical superiority of the retreat over the advance. The fluidity of the protesters benefits from the same disorganization and chaos that greatly handicaps law enforcement. All the protesters have to do is run, while law enforcement has to establish a phalanx, prevent gaps in that phalanx, prevent flanking maneuvers, guard their rear, maneuver in a uniformed advance, make arrests, secure arrestees, etc. Law enforcement depends upon a tightly synchronized and highly organized unit. We don’t.

Toy smoke devices can be deployed at random intervals throughout an entire march. Law enforcement will see the smoke, and not having knowledge of its composition, will deploy gas masks for safety reasons, causing them to wear their gas masks for extended periods. Gas mask canisters have a life of 5-8 hours. If the protest lasts for a long period, the effectiveness of their masks will be depleted, making law enforcement just as susceptible to tear gas as the protesters. However, if this tactic is employed, it must be remembered to keep toy smoke devices in reserve in case of kettling. Popping off toy smoke devices all day to harass the enemy and then being kettled without any would be short-sighted.

The best time to use toy smoke devices is before the protest is kettled. If the occupation of a building is the goal, then toy smoke devices should be used to shroud the building in smoke during the occupation. If it is apparent that the protest is being herded into a confined space where escape would not be possible, that space should be filled with smoke before law enforcement manages to kettle protesters. Law enforcement will immediately recognize the lack of visibility in that space as a safety concern and a tactical liability. They will then adjust their strategy and attempt to identify another location in which to kettle protesters. If they can readily identify an alternative, or if they believe the political costs too high to employ increased levels of violence, they will abandon the initial attempt to kettle in favor of that alternative location or an alternative with reduced levels of violence. If law enforcement chooses to disengage, then the protesters can avoid the necessity of punching a hole in a police phalanx in order to make their way to freedom. It should be noted that if law enforcement herds protesters into a smoke-filled area, law enforcement should not be allowed to remain outside the perimeter of that area. Toy smoke devices should then be deployed within the area of operations of law enforcement. 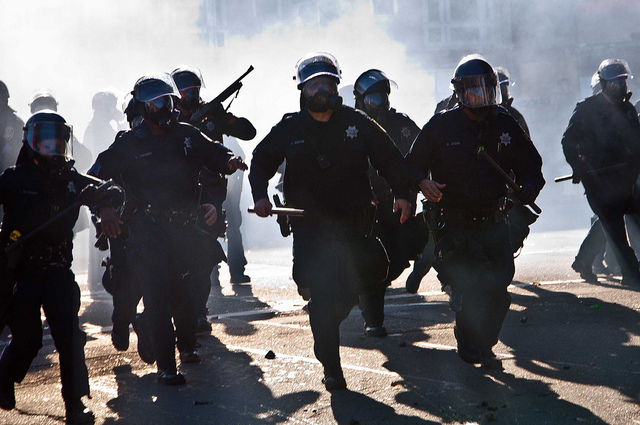 If law enforcement does continue herding protest into a smoke filled space, it means that no suitable alternative location to kettle protesters has been decided upon and they have made the decision to increase the level of violence against the protesters to kettle them in a location that they understand places them in a position of tactical inferiority. Lack of visibility also means greater freedom from the prying eyes of cell phone cameras, journalists, legal observers, etc., so law enforcement can be relied upon to use the cover to engage in acts of brutality. However, the lack of visibility also allows the protesters greater freedom to rush the phalanx and punch a hole without discovery of their identities.

The failure of the phalanx of law enforcement in this situation is inevitable, and caused by law enforcement itself. Even if the protesters don’t make the conscious decision to break the kettle, the police phalanx will continue to advance, increasing pressure upon the protesters until that pressure explodes through the numerous weaknesses in the phalanx, which is now an unsound unit because chaos and disorder have been introduced by lack of visibility.

Once a hole is punched in the phalanx, the mass of the protesters will rush through it like water from a bursting dam. Visibility is unnecessary; the release of pressure caused by large numbers of people being crowded into a confined area will cause a flow of bodies sufficient in itself to guide protesters through the hole and towards safety.

Once through the phalanx, run until you are outside the area of operations of law enforcement. After you have broken through the phalanx into their rear, you are behind enemy lines and in an area of increased danger. Law enforcement will panic because the protesters have destroyed their organizational cohesion and they know that they are compromised.

Once you have passed beyond law enforcement’s area of operations, if the numbers allow, organize with those that have escaped the kettle and resume the protest. If numbers don’t allow, go home and celebrate. You’ve won the battle.

Make your own toy smoke device by following these instructions.