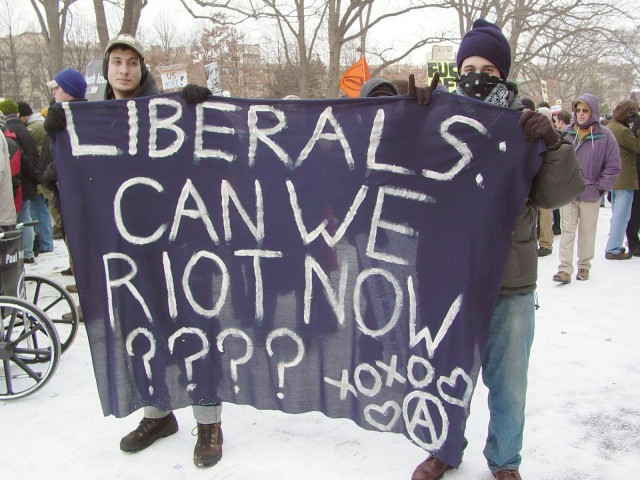 This debate is a heated one, and I’ve seen a lot of folks talking at cross-purposes and getting frustrated (myself included) I think a large part of the reason for this is that people are trying to discuss several different questions at once, and conflating the answers to one with the answers to another. Here, I’m trying to pull these different questions apart and discuss some factors that may assist us in seeking answers to these questions – partially for my own understanding, and partially because I have not read anyone else attempting to do this and I’m hoping to add some depth and nuance to the debate.

I am not seeking to provide the answer.

In fact, I believe that the more we get away from the idea that there is an answer to these questions – the more we are willing to Occupy the area of murky complexity and uncertainty in between – the better off we will be, and the more we will be living into the kinds of values that will improve the world.

What Is Violence and When Is It Justified?

This is one subject that folks seem particularly eager to nail down. Is property destruction violence? “Yes,” some people insist. “No – it never is,” others say, and demand to move on. Someone pulls out the dictionary, a particularly useless document when it comes to taking action in the world.

Let’s get real. To those who say that property destruction is never violent: ask someone who has been abused by having something of value destroyed whether or not it was a violent experience. The use of physical force against an object often carries the implication that force may subsequently be used against the person’s body; it can also carry the implication of uncontrollable rage, a force that harms humans if they happen to get in the way.

And to those who say that property destruction is inherently violent: if someone quietly disables construction equipment that will soon be used to cut down an old-growth forest, would you call that violence? (I’m going to go ahead and assume the answer is “No” here.)

Whether property destruction is violent depends on the power, energy, and intent fueling it. This is not a yes or no question. We do ourselves and the movement a disservice when we try to close the book on this subject by pretending otherwise.

Another gray area is the question of acting in self-defense, or defense of others, when confronted with violence oneself. On one end of the spectrum, there are situations of life-or-death, or with the potential for grave injury, in which the vast majority of us would agree self- or other-defense is justified. Beyond those particular scenarios, the waters become muddier. When does “defense” cross the line into escalation, or even vengeance? Many horrible acts have been committed throughout history using the justification of self-defense, up to and including genocides. Tread carefully here, comrades.

Navigating the Diversity of Tactics

There are three questions I’ve noticed emerging in the debates I’ve witnessed about how we decide on tactics. Before we endorse or engage in a particular tactic, I think the answer to all three questions should be “yes.” (Of course, it’s not as simple as all that – finding the “yes” answer involves a process of communication, learning, and deep introspection.)

This is one question that I think a lot of the writing out there has been trying to address. Someone suggests that we shouldn’t chant “fuck the police” or indiscriminately destroy property; another person launches into an explanation of why it makes sense that folks who have been oppressed and abused by police and the state would want to express their anger in that way. This is true, and important. We should not condemn anyone for reacting in a very human way to oppression and abuse. However, a reaction being understandable does not follow that it is useful, productive, or right.

A strategic action serves a specific goal as well as taking into account its impact on our long-term goals. It considers the potential impact on allies and communities associated with the movement, including public opinion in all its diversity and heterogeneity. It considers the possibility of retaliation (violent or otherwise), including against those who may not be consenting to involvement in the action. It considers our cultural and temporal context. Strategy is where we look outside of ourselves, beyond the present moment, outside of our feelings and our personal experience.

This is the sticky one, of course – where we will find out whether and how our values diverge in significant ways. Our deeply held philosophies, spiritual beliefs, and moral-ethical codes will likely clash at certain points. However, in our mutual investigation of this question, I believe there is a deeper question around which we can coalesce: that of whether, and at what point, our movement will become like what we are fighting in the first place.

This question is not merely theoretical. It has happened to many, many movements in the past: in the event of their success, formerly idealistic revolutionaries become the enforcing arms of bloody, repressive regimes. This possibility is one that we must keep in mind and continually guard against. We cannot afford to put it off until we are have achieved success.

How do we do it? One way is by evolving the vision of what we want to become: of how we, as a movement, as a community, and as individuals, want to be different from those who advocate and uphold the current system. Not just in values and beliefs – even capitalist beliefs can look good with the right spin on them – but in our actions.

Many of us say we value redemption and transformative justice over vengeance and punishment. What does that look like, in practice? How does this affect the actions we take in our relationships with the police and with the 1%?

What kind of people do we want to be? What does that look like on the street? How does that change depending on the scenario? At what point does power become the only difference between us and those who oppress us? How can we avoid reaching that point?

The Part About How It Feels Good

Comrades, let’s admit something to ourselves and each other: part of the reason we want to engage in militant tactics is because doing so feels good. Most of us long-term activists have experienced the adrenaline rush or high that comes from experiencing an intense confrontation with the police, or from successfully evading them and engaging in a strong direct action. Acting out our rage and rebellion feels good. Doing so in concert with others makes us feel powerful, and that feels even better. We’re human. We’re animals. It’s in our blood.

I have had fellow activists confess experiencing this high to me in sheepishness or even shame, but there is no shame in this feeling. It can be an important part of what motivates us to keep taking to the streets, to have courage and keep taking powerful public action even under the threat of abuse and violence. It can forge deep emotional bonds between us and our comrades.

On the other hand, the desire for this feeling can lead us to throw strategy out the window and take on confrontation merely for the rush. It can lead us to commit acts that are harmful, damaging to each other and ourselves, acts that alienate us from each other and the community, instead of bringing us together. And its greatest potential to do this comes when we deny that this feeling is part of our motivation.

We will have our best chance to harness this feeling and use it for good if we acknowledge and if we talk about it. If we don’t, all bets are off.

As I have followed this debate, I have seen many calls for us to be “in solidarity” with each other. People saying that we are on the same side, fighting for the same cause, so we shouldn’t argue with each other about the different tactics we choose – i.e., the enemy of my enemy is my friend. Frankly, this feels like a cop-out. It also doesn’t feel like a call for solidarity: it feels like a call for loyalty.

I don’t put much stock in loyalty. I have seen loyalty destroy the integrity of communities and individuals. It has fueled business as usual throughout human history: citizens are loyal to their nation, so they unquestioningly support its actions; they are loyal to their friends, so they don’t speak up when they witness a friend doing something morally wrong; they are loyal to an ideological system, so they refuse to question whether aspects of that system do not serve the greater good. Every day, people who know better allow others to commit atrocities in the name of loyalty.

Solidarity is different. Solidarity requires an acknowledgment of our interdependence, that our actions affect one another deeply, that we are by our very nature beholden to and responsible for one another.

Solidarity means lovingly holding each other accountable to our shared values. It means having the courage to ask each other hard questions, and the fortitude to withstand being asked those questions ourselves. It means supporting each person’s autonomy, and yet also calling people to account for behavior that harms other individuals or the community. This is not “policing”: it is what we should expect from those who love us. True solidarity, community, and love mean caring enough about a person to want them to be their best self, and willingness to help them achieve that.

I don’t want to be part of a mutual admiration society in which people validate my poor choices – be they well-intentioned or not – in the name of “solidarity.” There is nothing new, visionary, courageous, or revolutionary about that. I want to be part of a truly revolutionary movement, one where my I am challenged to be my best possible self, so that I can serve our vision of creating our best possible society.

Comrades, I invite you all to compassionately, thoughtfully challenge me, teach me, push me, raise my consciousness, constructively criticize me, and encourage me to be my best – as many of you have already begun to do in a powerful way.

And I promise that, in solidarity, I will do the same for you.