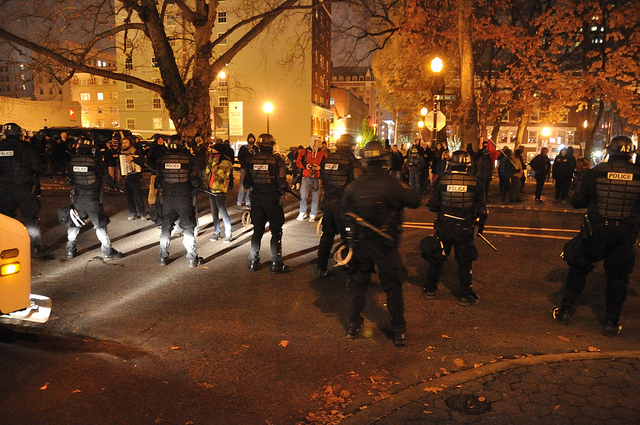 The Portland Occupation stumbled upon a tactical innovation regarding occupying public spaces. This evolution in tactics was spontaneous, and went unreported in the media. On December 3rd, we took a park and were driven out of it by riot police; that much made the news. What the media didn’t report is that we re-took the park later that same evening, and the police realized that it would be senseless to attempt to clear it again, so they packed up their military weaponry and left. Occupy Portland has developed a tactic to keep a park when the police decide to enforce an eviction.

Heavy infantry is a group of soldiers marching in a column or a phalanx that are armed with weaponry for hand to hand, close quarters combat. Heavy infantry function as a unit, not individual soldiers. Their operational strength is dependent upon maintaining the integrity of that unit. Riot police are heavy infantry. They will always form a line and advance as a unit.

Light infantry are armed with ranged weapons for assault from a distance. Light infantry operate as individuals that are free to roam at a distance and fire upon the opposition with ranged weapons. Cops firing tear gas, rubber bullets, water cannons, bean bag rounds, etc. are light infantry. They remain to the rear of the phalanx of riot cops (heavy infantry) and depend upon the riot cops maintaining a secure front and flanks to provide them a secure area of operations.

Protesters function fluidly as either light or heavy infantry. Their mass, because it is lacking in organization, functions as a phalanx, having no flanks or rear. Lack of organization gives that mass the option of moving in whichever direction it feels like, at any given time. If protesters all move to the right, the entire group and supporting officers has to shift to that flank. While the protesters can retreat quickly, the police can only advance as fast as their light infantry, supporting staff can follow and maintain a secure rear (if the mass of protesters were to run to the next block over and quickly loop around to the rear of the riot cops, the organization of the cops would be reduced to chaos). If that police cannot assemble with a front to oppose protesters, they are useless. The integrity of that tactic is compromised, and unable to maintain internal organization, the cops revert to individuals engaging in acts of brutality, which eventually winds up on the evening news and they lose the battle regardless of whether they clear the park or not.

Because of the lack of organization in a crowd of protesters, light infantry cops firing tear gas, etc. has little effect because it just serves to disorganize a group that relies upon disorganization in the first place. All it really does is disorganize the riot cops, who then resort to brutality.

So far, all the occupations have, in a grave tactical error, agreed to engage the riot cops when they march in to clear parks. This has been a show of bravado that has the tactical benefits of providing media coverage of the brutal methods of police and the benefit of draining the resources of the oppressor by forcing them to incur the expense of arresting and prosecuting people for trivial offenses. 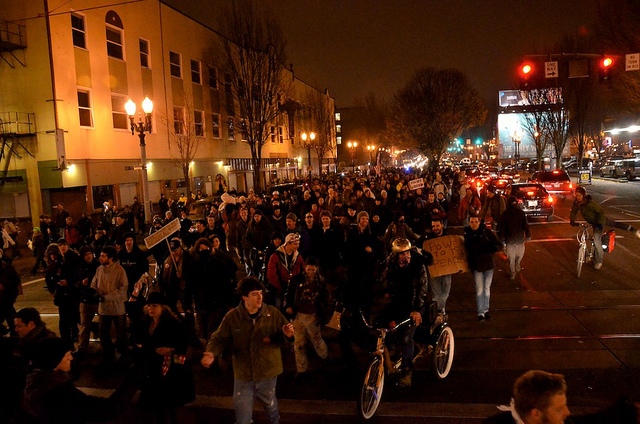 Now, to move on to the actual application of these tactical principles (that evolved by accident rather than conscious thought), we can take the example of Shemanski park on the 3rd. We occupied the park and set up a few tents and facilities to serve food and coffee. The police soon declared an emergency closure of the park and came out in force, with full riot gear and all the weaponry. The line of riot cops soon forced us out of the park, so someone decided that we ought to march to City Hall. It was about 9 pm on a Saturday night, so City Hall was closed, but we marched there anyway, 800 of us blocking traffic the whole way. Once there, the riot cops once again lined up to disperse the crowd. However, since City Hall was closed and there was no point in staying there anyway, someone had the idea to march down to the area of town where all the clubs were, so we took off marching again. The riot cops were trailing behind us, as was the truck with the giant speakers on the top repeatedly announcing “This street is open to traffic, individuals blocking traffic will be subject to arrest.” Announcing this repeatedly was useless. One principle of non-violent resistance is this: one person has to walk on the sidewalk, 500 people can walk wherever they please. The riots cops had no place to form a line, so they were crippled.

Since we had no clear destination, the police were unable to get ahead of us and set up roadblocks. They were helpless to do anything but trail along as an escort to the march. The only other response they could have had was for the riot cops to charge into the marching crowd and attempt to disperse it by brutality, which would have been mayhem that could have only resulted in a PR loss by the police department as the images of beatings and brutality hit the airwaves the next day.

The march, having no clear destination, marched wherever it willed through the downtown area, blocking traffic and light rail at will and growing larger as onlookers joined in. One of the participants of the march had a three-wheeled bike with a loud amplifier hooked up to batteries with which to hook up an iPod and blast party music the whole time. This kept the atmosphere enthusiastic and energized and served to motivate onlookers to join.

The ability of music to raise morale can’t be understated. Slayer, Metallica, etc. wouldn’t be good music for this because it would induce aggression. Rhythmic music that’s usually danced to or played in clubs works best. If a DJ would play it as the ball drops on New Year ’s Eve, then it’s perfect.

After marching for 3-4 hours, we eventually found ourselves a block away from the park that we’d been forced out of, so we took it again. The riot police lined up and prepared to take the park again, but the attempt was called off and the police just left. They realized that they would have to go through the standard military procedure of clearing the park inch by inch, only to have us go back out into the streets and march again while they, one more time, trailed along helplessly- their entourage functioning as a part of the march, creating an even larger disruption to traffic (the marchers covered a city block, the trailing police took up another city block, effectively doubling the size of the obstruction to traffic).

In summary: when the cops come to clear the park, don’t resist. As they are preparing for their military maneuver and use of force that the Occupiers cannot reasonably be expected to resist, the occupiers should be packing up their tents and baggage and loading them into wagons, bicycles, backpacks, etc.

Force the cops to clear the park inch by inch, but try to avoid arrest in so doing. Once they have cleared the park, rouse the crowd through loud amplification announcing that you intend to march (any destination will do). Get the music blaring and then march aimlessly, blocking traffic the whole way, for hours. The crowd will be energized and willing to march for a long time, being spurred on by energetic music and chants.

The police will eventually trim down their entourage because they realize that they are helpless. Eventually, work your way back to the park. Or, if the police have fenced off the park, head to another park. If the police force you out, march again and they will be forced to follow. Eventually, they will inevitably come to the conclusion that they would rather have you in a park than disrupting traffic.

The police have no response to this tactic, other than resorting to brutality. And if they do that, we win whether they clear the park or not.