AN OPEN LETTER TO MAYOR SAM ADAMS
(read before City Council on December 14, 2011)

I voted for you and have supported and believed in you. Recently though, I have questioned your actions in regards to the Occupy movement.

You are lucky to be mayor of such a fine city. Portlanders have flair, amazing creativity, and are truly free spirits. We have a long history of innovation and standard-setting. Across the spectrum we love this town, we take pride in being Oregonians and we cherish this country and its values, codified in the Constitution and the Bill of Rights. And across the spectrum, Portlanders are increasingly abhored at the intentions and actions of the federal government. We are in fear of the evil corporate persona that’s running the show.

The nation-wide highly coordinated crackdown with police-state overtones, on non-violent, democratic people and the media slur that preceeded it – testify that someone fears our power. We saw the same thing across the country: horse troops, riot gear, water-cannons, batons, pepper-spray, and tear-gas used on non-violent democratic people. 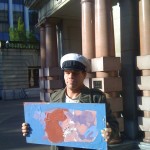 ment of Homeland Insecurity, orchestrated this whole thing like a ballet. These un-American bastards don’t give a damn about the rules. They are looking to paint occupiers in to “Domestic Terrorists” and direct the military to round us up and haul us off to special brigs. I know it sounds wacky but the full details can easily be obtained.

Don’t believe what I am saying? Ask President Kennedy, or Dr. King — or Building 7, for that matter.

Mr. Mayor, I believe in you, the real you, the real Sam Adams: the civic activist who stands up for his country’s values and is willing to fight to preserve our liberty. You choose, Sir. You are the judge and jury, over yourself, and by extension, over Portland.

So I plead with you for your own sake, for everyone’s sake, use your courage and wisdom. STAND UP or STAND DOWN.

Or will you stand up like your brothers and sisters did at Stonewall? Will you step up and be remembered like New York City Council Member Ydanis Rodriguez and Philadelphia Police Captain Ray Lewis, who were both stripped of their liberties while being arrested in Zuccotti Park? Or will you step down like Sharon Cornu and Dan Seigel, both high-ranking Oakland officials, who resigned in protest of the treatment of Occupy Oakland.

You are the judge and jury.

I hope to support you in the future, but you will have to stand up or stand down. The city’s treatment of the Occupy movement and the bones of your ‘federal legislative agenda’ that you are throwing us are wholly unacceptable. At the very least, we need to see the Council issue a resolution in support of the Occupy movement as Cleveland and Pittsburgh have already done.

Mr. Mayor, I understand that you endure tremendous pressure from forces seen and unseen, as if someone has your fingers in a vise. I empathize with your fear. But I submit to you that the evil corporate persona has our city’s charter, our state’s sovereignty and our nation’s Constitution in a vise, as if they were tender appendages.

We must stand up together and shake off these torturous vises, if our country has any hope of surviving.

So, please, whatever you do, cease being a patsy for the Feds and the evil corporate interests that own them.

1 comment for “Stand Up or Stand Down: An Open Letter to Mayor Sam Adams”