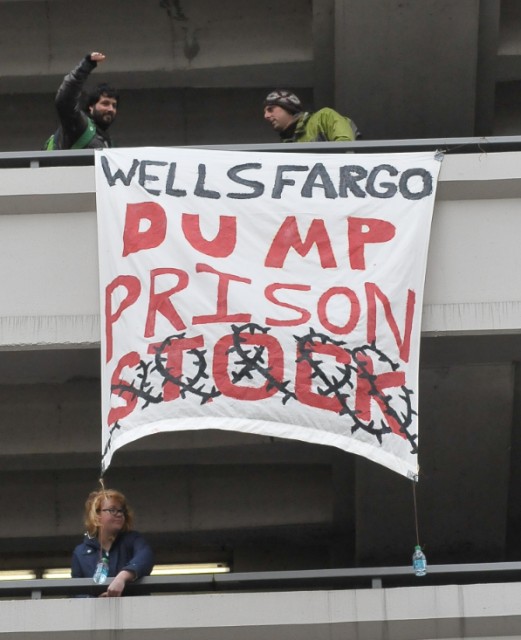 On Martin Luther King Day, those arrested on the November 17th National Day of Action against the banks participated in a rally and march, raising awareness of the fact that Wells Fargo profits off of tax payers through bailout funds as well as through its investments in the private prison industry. Members of the Portland Central America Solidarity Committee (PCASC) also staged an action against the racist investments of Wells Fargo.

One block from the Wells Fargo at 900 SW 5th Ave, activists dropped a banner calling on Wells Fargo to “dump [their] prison stock.”

Wells Fargo received billions in bailout funds from the government to aid people struggling with their mortgages and loans. In Oregon, over 26,000 families face foreclosure. Meanwhile, 2011 was a record year for profits for Wells Fargo, earning over $4 billion in the 4th quarter alone. This money is not helping those that need it most.

Wells Fargo also lines its pockets with profits from the private prison industry. For years we have seen schools closing while new prisons are being built. Communities of color disproportionally fill prison populations. More recently we see the direct line in investment, lobbying, legislation and profits with the sole aim to increase the number of individuals who find themselves in jails and detention centers. The more people in detention and in jail the more money that the private prison industry and their investors make. 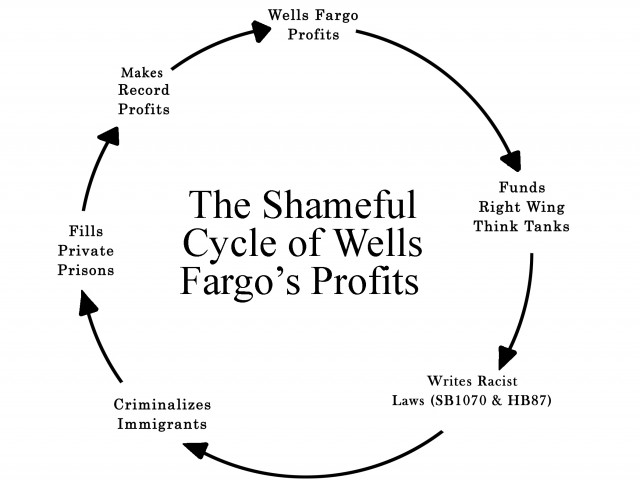 Wells Fargo is a key actor in this cycle. They fund the two largest private prison industries in the United States: Corrections Corporation of America (CCA) and GEO Group. Through their membership in the American Legislative Exchange Council (ALEC), they also sponsor politicians who help to create racist legislation like Georgia’s HB 87 and Arizona’s SB1070. Both of these laws institutionalize racial profiling and expand the definition of a criminal to include, undocumented, or non-white people.

While communities of color have always been the target of copious amount of profit for the private prison industry, we are likely to see ever-increasing profits with the passage of the 2012 provisions of the National Defense Authorization Act (NDAA), which allows any US citizen to be held indefinitely without trial or charges.

PCASC activists appealed to the crowd in the spirit of Martin Luther King to rise up and help fight back against this unjust exploitation and greed. It is only when we begin to mass expressions of militant non-violent civil disobedience that we will begin to see real wins in the fight back.

Finally, the demonstrators closed with an invitation to get involved in the Shut Down the Corporations Day of Action on Feb. 29th against ALEC. Get involved! Visit http://www.pcasc.net/ to know more about these and many more upcoming actions.