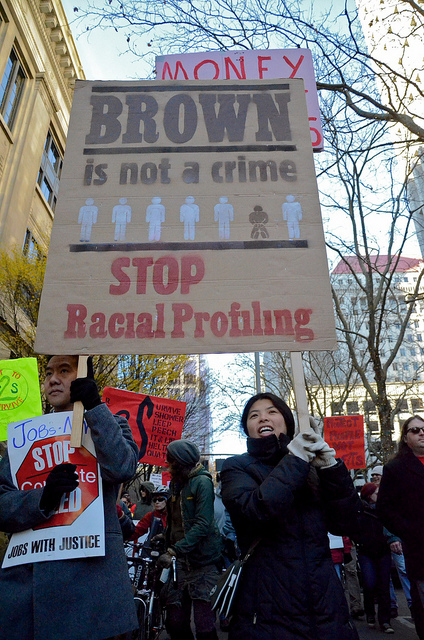 Is the Occupy movement racist? The obvious answer is yes, but there are still going to be plenty of people who wouldn’t agree with that assessment. In fact, it’s a pretty safe bet that a significant number of activists within Occupy would argue Occupy isn’t racist. It’s also probably true that many of those people, whether White or of color, would erroneously argue that any people, regardless of their nationality (color) can be racist. It’s this rampant confusion that merits an analysis of racism. What is racism? How does it function? And, who benefits from it? Yes, we understand race is a social construct, but that’s really only relevant to people who aren’t regularly victimized by racism. It’s an important topic, but one for a different article.

For this piece, we will focus on race as the major social phenomenon that it is in this society. So, first, let’s dispel the unscientific conclusion that racism is an attitude one person has about different races. This attitude people talk about is actually prejudice: judging people based on preconceived notions that are not based in any scientific theory or practice. Everyone can be prejudiced and everyone is prejudiced, but prejudice cannot be confused with racism.

Predatory lending is an excellent example of racism, but if you are confused and think racism is simply an individual attitude, you won’t understand how predatory lending works because you will be erroneously looking for the redneck racist banker as the culprit. Instead, if you truly want to understand how this happens, you have to look at the over five-hundred years of programming mentioned previously. Then you have to understand the type of conditioning such programming generates.

In ethnically-European people, it generates the benefits of feeling confident and able to maneuver within a system that offers you acceptance and nurtures your sense of self. For people of color, it offers feelings of repression and inferiority and a sense of inadequacy. So consequently, people of color learn to not make waves because doing so gets you in trouble. Bankers, being pressured to make as many sales as possible, learn how to get that sale through the path of least resistance.

People of color won’t complain about price nearly as much as ethnically-European people because we are trained to just accept police mistreatment. To just accept shabby service in a restaurant. Just accept discrimination on the job. Just accept higher prices. As a result, the banker learns to add points to the loan rate (the way he/she makes more money) on the applications of people of color because they are much more likely to just pay it; whereas, that banker doesn’t even try that with European applicants because for many reasons, they are more likely to complain.

Police are much more likely to harass and arrest people of color because they are much less likely to have legal representation and money, and no one is going to complain because we’re criminalized anyway, right? It reminds of me when I tell ethnically-European people how many times I’ve been pulled over, they’re first response to me, whether they are right-wing hacks or so called progressive liberals, is “what did you do?” These are just two examples of which we could go all day. The point is the discrimination is systematic, not individual. And, because it’s systematic, most European people don’t see it. Consequently, to them, it doesn’t exist.

What is the solution? That’s an entirely different article that we’ll delve into soon enough, but we will say institutional racism is a byproduct of capitalism. In the meantime, do the work by studying about White privilege. People of color have work to do as well. We need to stop internalizing this system of oppression and we all need to become voracious about learning more. We praise the Women’s Caucus and any other groups for having study materials. We all need to be doing this. If you don’t engage in any studying that combats the backward aspects of this system, then you are going to be influenced heavily by those backward aspects no matter how smart you think you are. If you don’t believe that, check yourself the next time someone of color is talking about their experience with racism and they can’t get a word in edgewise because of your arrogant desire to educate them about how you have overcome racism in your White privileged life.