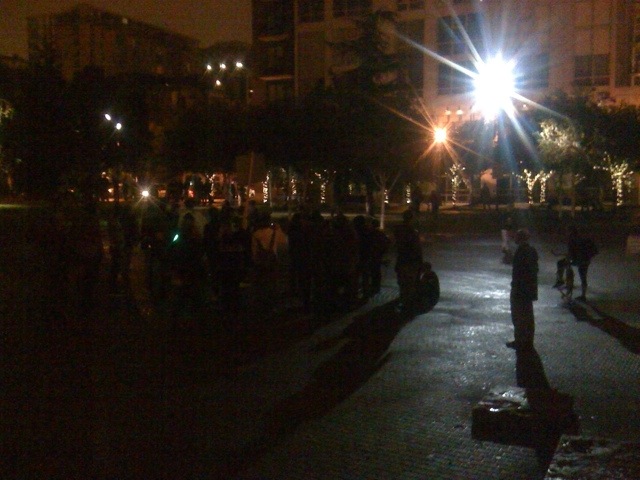 I cried this morning upon hearing the OPB radio story of Jamison Park last night. I still well up thinking about it.

I am so proud of the people that stood for the rights of my grandchildren, their generation, and myself last night. How can I ever repay that?

I wonder, too, how can we educate the folks that sit in local government? How can we tell them that they are mistaken as to what what is going on?

Randy Leonard, Sam Adams, and the Portland Police Bureau used some very brusque language when discussing our plans for Jamison—discussing us, not discussing with us—it would seem. But when it came down to it, people in the plaza—who had volunteered to be arrested if necessary—did what they said they would.

They simply allowed themselves to be cuffed and went limp. No violence.

The City and the police on duty were scared that the Occupation was in Jamison. The Occupation faced heavily armed, trained forces that out-numbered them by almost three to one. Violence often happens when people are scared, but do not understand why.

No one EVER said the Occupation is about what the City and the Police keep saying it is about.

We kept our promise. We Occupied. We were not violent.

I have walked through the halls of universities and colleges this last week. They incessantly talk about Occupy in their classrooms, as relevant to their studies.

Late Night mainstream media talk shows have jokes about the Occupation as a staple.

Every time there is a news article about the Economy and the Common Man, the next sentence is about the Occupation.

The Bank of America, Wells Fargo, and Chase reversed the plan to implement a fee for using debit cards.

We are Legion. We are here. We come in Peace. I think maybe they might have seen us.

6 comments for “About Last Night”