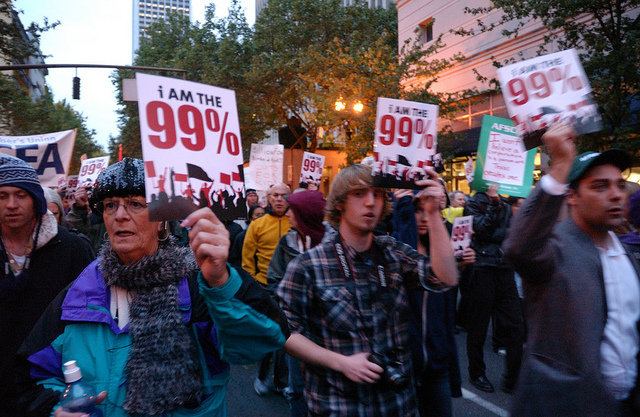 Last month, the Bank of America Corporation received the latest in a series of credit downgrades. Those who had derivatives deals with BAC’s subsidiary, Merrill Lynch, became understandably worried about the health of the company, and began to demand additional collateral from Merrill Lynch as insurance against the possible failure of their deals.

Fortunately for the Bank of America Corporation, it also owns the commercial bank branded as Bank of America. Unlike the company’s investment bank Merrill Lynch, Bank of America holds the deposits—the checking and savings accounts—of millions of Americans. To insure these account holders against bank failure, BOA is a beneficiary of Federal Deposit Insurance Corporation protection—if the bank no longer has the money to cover withdrawals by its account holders, the federal government is required to use taxpayer money to make up for the losses. Because Merrill Lynch does not hold the deposits of ordinary account holders, it is not backed by FDIC insurance, and its shareholders would pay for any losses it suffers—an extremely distasteful proposition to BAC.

BAC has thus transferred $22 trillion of dangerous derivatives from Merrill Lynch to Bank of America, so that, should BAC’s poor decisions and risky behavior end up threatening its capital base, the corporation will—again—be rehabilitated by the United States government, at taxpayer expense. This $22 trillion supplements $53 trillion in derivatives already held by the Bank of America Corporation’s FDIC-insured commercial bank.

The only reason we know any of this is that anonymous sources risked their employment to tell us. Spokespersons for BAC, FDIC, and the Federal Reserve have so far refused to comment in any capacity on any of this.

Skeptics point out that this move is standard practice, not just for the Bank of America Corporation but for JP Morgan Chase, Citigroup, and Wells Fargo. They say that the risk involved is negligible compared to the possible profit. They argue that profit always generates social good. Indeed this is standard practice. But recent years have shown that the risk is in fact grave, and that the profit motive alone cannot take care of the vital interests of the American people.

Put aside for a moment the characteristically impenetrable details of this latest in an endless series of clandestine financial manipulations by the wealthy. The important thing is the pattern: once again, three years after the TARP bailouts, and four months after the Government Accountability Office’s discovery of a secret second bailout of $16 trillion for a handful of banks and corporations, a company unwilling to suffer the consequences of its gambling is passing its risk onto the American public. You were not consulted in this decision. Nor were your representatives in Congress. The information was kept from you by people who believe it is not your business what the banks you entrust with your money do with that money.

You do not have to entrust them with your money. People across the country are moving their money from these multinational banks to put it in more responsible institutions—credit unions and small, local banks. We urge you to join them. A mass transfer is proposed for November 5th, but the specific date is not as important as the act of transfer. This is the only form of speech these corporations understand. Let your voice be heard.

by Theon Weber and Jacob Clary

This piece is part of our theme week, about “Greed”, and what we’re doing about it. Whether it’s media, direct action, or simply food, this occupation is very much about finding solutions. We hope that you’ll join us, both here at The Portland Occupier, and down at the Portland Occupation.