By an Old Woman Who Votes

The average age of the 25 people arrested this morning for demonstrating Civil Disobedience on the Steel Bridge is fifty.  Eight (corrected, not nine) were over sixty years old. It’s time for the spin masters at Portland’s City Hall to stop characterizing Occupy Portland as young and unrealistic. Some of us have weathered many struggles. From Civil Rights to Women’s rights, from Peace to Gay Rights, we have been on the front lines of every progressive political change in the past half-century. 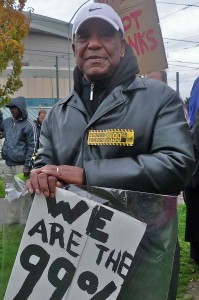 Listen to us: the young idealists among us are more attuned to the realities on the ground than the politicians who continue to cast their lot with the banksters. The young, hard-working organizers who got this movement onto the ground and into the tents know what they’re doing.

By evicting Occupy Portland from the two tiny, seldom-used parks downtown, Portland’s mayor has betrayed the progressives who elected him, and if our Chief of Police thinks he’s going to ride into the mayor’s office on our backs, he’s more unrealistic than the greenest twenty-year-old.

Bernie Sanders is one of us. Listen up. The man tells it simply and clearly. He says the U.S. has the most unequally-distributed wealth in the developed world. Why is that? Maybe the Portland Business Alliance has an answer to that. Let’s ask them. I understand they’re bankrolling Reese for Mayor. 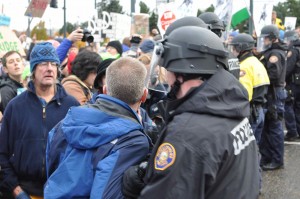 11 comments for “Elders Have Spoken With Their Bodies”