Animal Defense League has organized a march in solidarity with those who suffer injustice at the hands of the fur trade and in opposition to those corporations and individuals who benefit from the suffering and the commodification, marketing, and sale of fur products.

Meet up at Downtown Nordstrom (Corner of SW Broadway and Yamhill)

We are not going to forget about the plight of wildlife, the environment, workers and communities as the holiday season approaches and mass consumer culture seizes our city. We are not going to let apathy or fear encroach on our sense of urgency and our passion for freedom and justice.

The fur season is upon us. What are you going to do? 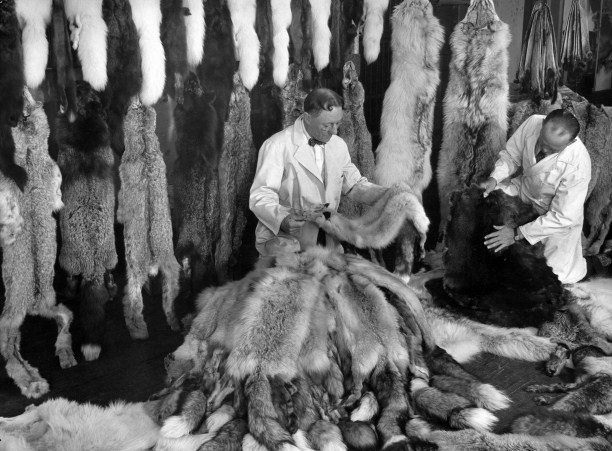 There are 18 fur farms in Oregon, holding captive some 340 thousand wild animals.

But that is just a sliver of a much larger, much more grim picture.

It can be argued that the international fur trade laid the foundation for modern capitalist globalization. The Hudson’s Bay Company, the Pacific Fur Company, The Northwest Company and the American Fur Company are just a few examples of many organizations that established colonies, built socio-economic relationships with indigenous communities (later to be exploited) and traded commodities internationally that were exploited from native land bases. Some economists have argued that the fur trade served both as an incentive for expanding and as a method for maintaining dominance, in an imperial struggle for power.

Today, the fur industry generates tens of billions of dollars in sales, with the largest markets being in Russia and Denmark, where the US exports most of its pelts. Over the last few decades, China has become the biggest exporter of furs, in part because of their almost non-existent animal protection or environmental laws. All this trading occurs in a small handful of international auction houses during several “fur exchanges,” which amount to lavish parties where industry elites trade hundreds of millions (of dollars and dead animals) in just a matter of days.

All of this capitalist excess comes at the expense of wild animals, the environment, workers and rural communities.

In the United States, a total of around 7 million wild animals are trapped annually for the fur trade. Trapping methods include painful leghold traps, conibear traps, snare traps, and various poisons.

There are a total of 265 mink farms in this country that are producing roughly 2.8 million pelts off of the backs of these animals, while another 700 thousand are held captive for involuntary breeding. Fur farming confines wild animals into small wire cages, approximately 38cm wide by 30.5cm high by 61cm long.  Life in cage for a wild animal results in many behavioral abnormalities ranging from neurotic and uncontrollable pacing to self-mutilation and cannibalism. If life in absolute confinement was not enough, these animals are destined for death though either auto-exhaust suffocation, neck-breaking, poisoning or anal electrocution, all cheap methods to save a few bucks.

Globally, 8-10 million wild animals are the victims of the trapping war, mostly in the US and Canada . Globally, 31 million mink are confined to the slum existence of cages on fur farms. 4.5 million foxes share this existence with them.

That brings the total somewhere near 45 million animals that the fur industry believes can be turned into products. They are fetishized, abstracted from their subjective, wild existence and turned into objects of value on the globalized fashion market. These 45 million animals are the victims of a war against the wilderness. If they are not killed by the traps, laid out among their land and community, then they are driven into the confines of massive concentration camps. They become the prisoners of the war, held for their labor (females, forcibly bred for production) or themselves becoming objectified as commodities.

They are killed. One by one. Forty-five million animals.

This industry is responsible for environmental degradation on a massive scale. In terms of energy, fur products resulting from wild trapping use about 300% more energy than a comparable synthetic product. Fur produced from factory farming use about 1500% more energy.

Trapping has disastrous consequences for native wildlife, and a number of species have become endangered or are currently listed as such because of the trade. This includes the Falkland Island fox, North American sea mink, Sea otter, and Giant otter. Traps are also indiscriminate when it comes to the animals they catch, and endangered species are no exception.

Fur farming produces massive amounts of animal waste consolidated in one small area. Animal wastes are high in phosphorous and nitrogen. This waste washes downhill towards streams and other bodies of water to pollute local watersheds. Waste seeps into the soil, contaminating the ground water that rural communities rely upon for drinking water. Excessive nutrients in these animal pollutants lead to accelerated algae growth, deoxygenating the water. Deoxygenated water is not suitable for human consumption and can kill certain species of fish. Because of the presence of fur farms, the Finnish town of Kaustinen ceased groundwater consumption and redirected the historical direction of stream flow.

Animal fur is normally biodegradable. However, the fur industry uses tanning processes to make pelts suitable for market. Tanning is a procedure that stabilizes the collagen or protein fibers in animal’s skins specifically to stop them from biodegrading. Tanning necessarily requires the use of mineral salts, formaldehyde, coal tar derivatives, and various cyanide-based oils, dyes, and finishes in addition to other ecologically devastating substances. Tannery facility pollutants are not limited to the before mentioned chemicals used in process. Other pollutants include protein, hair, salt, lime sludge, sulfides, and acids.

Dramatically elevated levels of lead, cyanide, and formaldehyde in the ground water near tanneries causes numerous human diseases. The US Centers for Disease Control and Prevention found that living near tanneries can increase the incidence of cancers like leukemia in populations by 500%, according to a study conducted in Kentucky.

Workers too, are not exempt from the ramifications of the capitalist fur trade. Tannery workers are dying of cancer caused by exposure to dimethylformamide and other toxic chemicals used to process and dye the skins. Coal tar derivatives are extremely potent carcinogens. According to a study by the New York State Department of Health, more than half of all testicular cancer victims work in tanneries.

All of this madness, destruction, and injustice are the side-effects of an industry that exists only for the benefit of the 1%. Fur products can cost hundreds to tens of thousands of dollars and amount to nothing more than status symbols for the privileged elite. Fur is peddled through the global fashion industry and its markets in the capitalist lynchpins of New York, Paris, London, Hong Kong, Seoul and Toronto. The fur trade flourishes at the expense of animals, human communities, laborers and the environment. The fur industry is a symptom of global problem of imbalanced power and wealth. It is a manifestation of the ecological and capitalist crisis. It is yet another struggle of the 99%. It must be opposed.

The chance to oppose it is on the horizon.

Animal Defense League has organized a march in solidarity with those who suffer injustice at the hands of the fur trade and in opposition to those corporations and individuals who benefit from the suffering and the commodification, marketing, and sale of fur products. 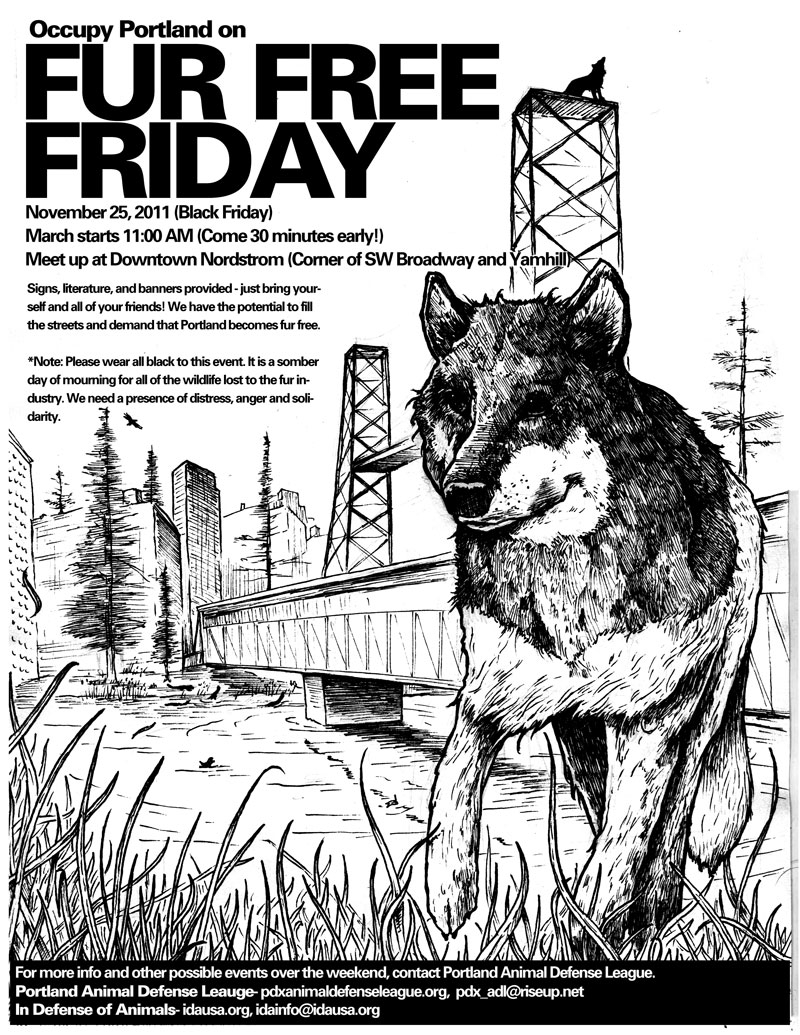 Note: This event is not GA-endorsed. It is a March organized by the local Animal Defense League.

4 comments for “Fur-Free Friday Less Than A Week Away”