It was my good fortune to have had a work schedule that allowed me to be a daily visitor at Occupy Portland for a string of 31 straight days.

Each visit brought new insights and inspiration.  It was an experience I will never forget.

A couple of days before the encampment ended, an occupier with whom I had enjoyed several conversations, gave me a tour of Marla’s food tent. 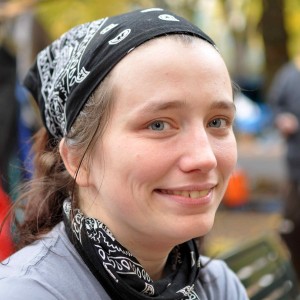 Marla Baskin was the brains behind the organization of the food stores in an old canvas square army tent.  Inside was a combination of wooden and plastic shelves buttressing the walls.  The tent was illuminated with white Christmas lights strung throughout.  The floor was a patchwork of wooden pallets. The vibe was warm and festive. I liked it.

One of the most impressive aspects of the Occupy Portland encampment was the food service.  I heard varying statistics on the number of meals served.  At its peak, 1,000 meals a day would be a conservative estimate.

The food came through donations from individuals and organizations.  One afternoon I chatted with a lady who runs a food pantry in the Portland area.  She was making what appeared to be a routine trip to the encampment.  That day’s delivery included milk, juice, yoghurt, and other items. 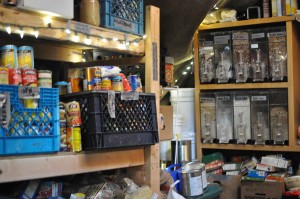 Cooking from scratch was a big part of the Occupy Portland kitchen.  In other words, they weren’t serving prepackaged chemically-laden convenience foods.  Rather, their meals were actually healthy, and fresh. One evening I noticed cooks sautéing chard in woks.  Another evening, they were preparing tamales from scratch.

On the wall of Marla’s canvas food tent opposite the entrance was an array of grain dispensers like the ones in supermarkets.  There were dispensers for brown and white rice, quick oats, whole lentils, black beans, white beans, pinto beans, and red beans. To the left were two plastic crates over-filled with cans of green beans and corn.  There was dry milk, soy milk, vinegars, juices, and a variety of other foods.  On the pallet floor there were additional boxes of food, including one with potatoes. Mind you, I’m just scratching the surface with this description. 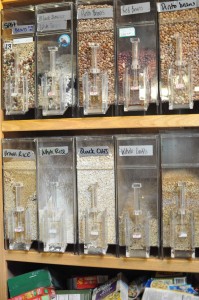 Anyone who saw Marla’s food tent would be convinced that those in charge of the Occupy Portland kitchen were very knowledgeable about healthy eating, and skilled at feeding hundreds of people a day. 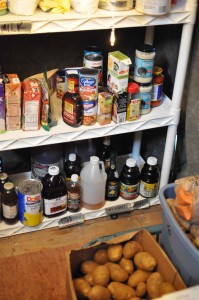 Sort of flies in the face of the corporate-owned media’s mischaracterization of the occupiers as a bunch of dirty, lazy hippies, doesn’t it?

More than anything else, the Occupy Portland encampment was a successful social experiment that demonstrated how a small community might exist in which people matter more than corporations.  It showed how strength could be measured not in money, but rather in social ties, and peace of mind.

Make no mistake.  Marla wasn’t the only creative thinker in the encampment.

The camp library with books arranged according to the Dewey Decimal system, the media tent, medical tent, information booth, art tent, Hispanic community tent, classroom tent, children’s play area, etc., all had a similar level of intelligent planning and creativity that was so plainly discernible in Marla’s food tent.

So if you missed the Portland encampment, why not make a point of keeping an eye on the Occupy Movement going forward?  If you do, you’re certain to witness some incredible creativity in action because there are so many occupiers like Marla out there.

Who knows, with such brains and focus, perhaps the occupiers are actually on to something.