The best things we’ve achieved in American history have been done without protests.  They’ve been done when the people followed the leaders, did what big business wanted them to do, and didn’t ask any questions.

“Wait,” you may ask, “what about all of those marches like with Martin Luther King, Jr.?” 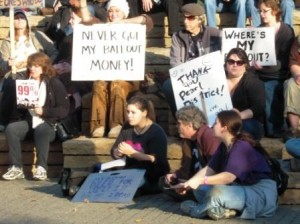 In 1980, there was a revolution in America.  Everything changed.  A peer of my 19 year old son said recently that history is pointless.  And he was right.  Anything that happened in America before 1980 (like MLK) is pointless to learn about.  All that matters happened since 1980.

1.  We became the super-sized nation.  Bigger became better; bigger cars, bigger homes, bigger meal portions.  You name it.  Nothing better defines what makes America exceptional than having the biggest, and thus being the best.  This is why it’s so un-American to protest big banks.  Big banks got that way because they were liked by a lot of people.  Big banks mercifully cleared the hurdles for many of us (even the poor) to achieve the American Dream of having a home mortgage.  Big banks went a step further by enabling us to have even more happiness by serving us things like home equity loans to pay for college, a room addition, a red convertible, or a family vacation to Florida.  For crying out loud, what is so bad about that?

2.  We tightened the screws on illegal aliens who came here and took all of our good jobs, and live off our welfare system, and have lots of kids so they can get even more money from our welfare system.  Now because of strict laws in a growing number of states, we can stop these illegals from taking jobs from white Americans, and not even learning English.  After all, we all learned English when we came to this country, and so should they, right?  My native language is Danish.  I learned to write English like this in just two years in the USA.  I’m sure all true Americans who read this have similar rapid English language learning stories to mine.

3.  We got rid of lots of union jobs.  Unions are socialist and bad for business, and what is bad for business is bad for America.  Since 1980, we’ve sent away loads of union jobs, never to come back.  Good riddance.  The upshot?  Corporate profits are at an all time high.  Now you’re talking.  Workers who complain about not making enough money, or not having benefits have to recall that all of the people who are rich today had to once pay their dues.  Newt Gingrich, for instance, was born Hispanic, and had a graveyard shift janitorial job for four years in college.  Because he worked harder than anyone else, he made it to the top.  Today he’s a wise, white, rich, elder statesmen.  We can all achieve the American Dream like he did.  It’s a level playing field.

4.  We are a nation that is governed by the rule of law, and we mete out justice to those who don’t follow the law.  Don’t ya just love how we nailed Bin Laden?  Clean and easy.  Kill him and dump him in the ocean; no need to prove that it actually happened.  His crimes were obvious; no need to waste precious taxpayer money with a lot of legal mumbo jumbo.  It’s recapturing the spirit of the Wild West, the spirit that made America great.  Cool!

5.  The Patriot Act.  It helped define what it means to be patriotic.  We must give up some of our privacy to keep things secure, and to protect ourselves from the terrorists who are trying to get us because they’re jealous of what we have, and are resentful they can’t be American.  Giving up some privacy is a small price to pay to keep those Middle Eastern madmen away from our blessed shores.

6.  We are Americans, and we have figured out how to have everything all of the time.  With our impressive and unprecedented global network of some 1,100 military bases, and some 200 clandestine black operations this year alone, you can rest easy that our troops are doing their utmost to ensure you continue to get all of the natural resources necessary to keep our non-negotiable divinely blessed way of life intact.  Oh, and of course, the troops are out spreading democracy everywhere as well.  I almost forgot to mention that.

See, it’s obvious protests aren’t needed to bring about great things.  All that is needed is for the people to listen to their leaders, not complain, and keep their noses to the grindstone.  This is America.  Everyone who does those things regardless of race, gender, disability, age, or sexual preference, will succeed, and become rich.  It’s guaranteed because America is an exceptional country, “a shining city on a hill” that illuminates the whole world.

So the next time you run into one of those lazy jobless hippies camping in the park downtown, please remind them that protest is un-American, and cite some of these outstanding achievements all done without protests.