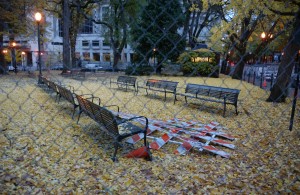 The City of Portland claims that Occupy Portland has cost the City $1.29 Million in police overtime and $100,000 to repair Chapman and Lownsdale Squares.

To put these numbers in perspective, $1.29 Million is less than .8% ( eight-tenths of one percent) of the City’s $169 Million annual police budget for 2011-2012,  and $100,000 is just .09% (nine one-hundredths of one percent) of the Parks and Recreation Budget of $113 Million. (FY 2012 adopted budget.) In other words, less than 3 days of police expenditures and less than one-third of one day of the Parks and Recreation expenditures, before including the donations noted above.

The City’s claim that Occupy Portland is responsible for the additional police presence ignores their own responsibility for managing resources responsibly.  As the Occupy marches held on November 19 and 20 demonstrated, the massive police presence was totally unnecessary, and in fact, was a key factor in the violence and unrest that occurred on November 17.  To blame Occupy for the bad management and over-reaction of the Portland Police Bureau is bad form.

We have yet to see a report that describes how much of the money to be spent on restoring the previously occupied parks is money that would normally be spent on maintaining those parks.  Also, we have not seen a comparison of expenses related to restoring Waterfront Park or any other park after large events are held there.

If the mayor truly supports the ideals behind our movement, he should not present these costs without context.  The costs claimed by the city are figures without perspective, a common ploy in exercising spin.

Yes, the Occupy Portland movement has cost the city money, as do many unexpected events, such as weather emergencies and other natural disasters.  But a large part of the purported $1.29 million in Police expenditures is a result of the Police Bureau’s poor judgment and over-reaction to a nonviolent protest, and at least one donor has already contributed substantially to the cleanup, and others may be forthcoming. Our nation is facing an impending financial crisis of unparalleled proportion, and Occupy Portland is a response to that emergency.

12 comments for “Un-Spinning the Costs of Occupy”