Text and pictures by K. Kendall 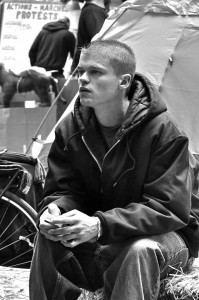 From South Bend, Indiana to Ottawa, Canada, from Democracy Now, to our own Portland Spokes Council, everyone is asking, Where do we go from here?  Do we go inside a warehouse or a building, as Occupymediagroup (in New York) hopes to do?   Or should we refuse to leave the parks, as  Occupy Los Angeles insists? Should we now develop a list of demands, as Michael Moore suggests?

Op-ed News, which calls itself “Progressive, Tough Liberal” says we should devote our energies to making radical change in the halls of power in D.C.

Kalle Lasn,  co-founder of Adbusters, says the “original magic” faded as news coverage of the encampments around the country began to focus on drugs, violence and homelessness. “Somehow, we lost the high ground, we lost the narrative” he said. “Tactically, the moment was right to declare victory, have a big global party and come back swinging next spring.” 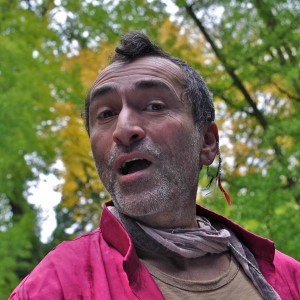 But his website recommends “precision disruptions” such as “flashmobs, stink bombs, edgy theatrics – against the megacorps and the unrepentant 1%, a festival of resistance in the snow with or without  an encampment that’ll lay the tactical foundation for our Spring Offensive.”

Occupy has “changed the conversation.” Everybody agrees to that. But sometimes the conversation sounds like a roomful of TVs tuned to different stations and all playing at full volume. Sometimes it’s difficult to hear anything we want to hear (like those meetings that take place on Livestream while people chat loudly near the microphone about beer and pizza). (Not to say I reject beer and pizza, though sometimes I want to hear what the spokes are putting forth.)

We have developed the art of listening to each other, respecting each other’s autonomous experiences. Now the information glut is overwhelming, the talks grind on endlessly. What was the question? 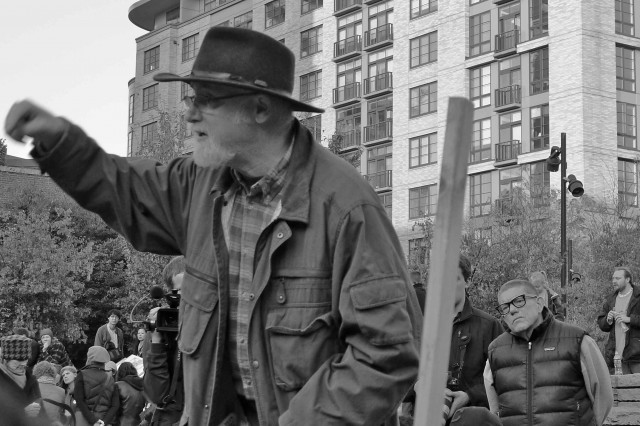 I am just one person, listening, reading, thinking. I don’t have a list of demands or a strategy to sell. But for me, a few voices do stand out.

One of those is the voice of Rinku Sen, author and political analyst. In a conversation broadcast on Democracy Now she says, “I think that if Occupy Wall Street is going to cause this public shift, a really significant part of that shift has to be the ability to recognize the role that racial discrimination, racial exploitation, and racial hierarchy played in getting us to this very depression, not just historically, but ten, fifteen, five years ago, last month. There are ways in which red-lining and mortgage theft and predatory lending and long-term employment discrimination and housing discrimination got us to the place where our economic systems do not work for anybody, including struggling white people.” 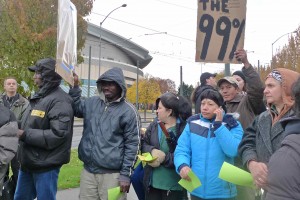 She goes on to explain that there is “a whole set of mechanisms and structures that were actually designed to take stuff from people of color and to disenfranchise people of color, that then ultimately always, always, always bleed out to affect everybody else.” That makes sense to me. Whatever we do, we must do it with people of color. People of color have had to resist “the Man” longer than white people. We need to stand together and examine the strategies that worked for Civil Rights. STAND WITH PEOPLE OF COLOR. 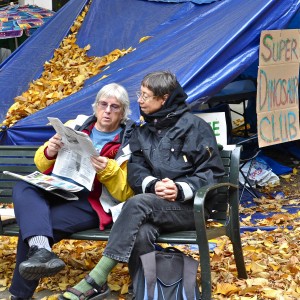 The next voice that stands out for me, in that same discussion, is the voice of Naomi Klein, who says the question before us is not “What are your demands?” but “What do we want to build in the rubble of this failed system?”  ASK WHAT WE WANT TO BUILD.

The Nation reminds us of the advice of Jeff Madrick, who urged the Occupiers in New York to “go to where the injustice is.” So they went to Harlem to protest the NYPD’s stop-and-frisk policies, to Verizon’s corporate headquarters to protest on behalf of CWA employees, to wherever New York Governor Andrew Cuomo sets foot to defend his millionaires. GO WHERE THE INJUSTICE IS.

Eve Ensler says, “Occupy Wall Street is a work of art, exploding onto a canvas in search of form, in search of an image, a vision. In a culture obsessed with product, the process of creation is almost unbearable.” BRING FORTH THE ART THAT IS IN YOU.

One of the features of Occupy that has drawn me from the day I attended my first organizing meeting, in late September at Tom McCall Park, is its respect for each individual’s particular talent. Core. Essence. Ability. So it’s possible that each of us, bringing forth the art that is in us, heading for where the injustice is, asking what we want to build, and standing with people of color (even if we are people of color), will find a different path to where we’re going. MANY PATHS, ONE JOURNEY. 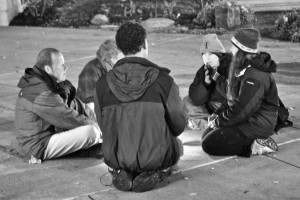 OccupyDC has crafted a statement that appears on the website warisacrime.org declaring the following:

We will not divert our energies into electoral work.

We will not identify with or begin to make compromises and apologies for any party, political candidate, or elected official.

We demand that the corporate plutocracy be replaced by majority rule.

We will educate and organize. We will agitate and mobilize.

We will escalate our campaign of cultural and societal change.

We will not go away, we will not be silenced, we will not relinquish the right to speak freely, to peaceably assemble, and to petition our government for a redress of grievances.

We will not relent. We will not be defeated. We will not be co-opted by either the Democratic or Republican Party, both of which have sold us out in Congress, the Supreme Court, and in the White House. 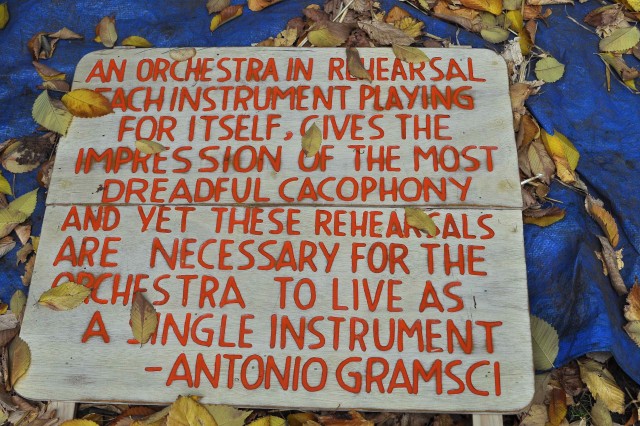 I can hear that. In that statement is room for each of us to find our own path to what we want to build on this rubble we have now.

2 comments for “What Next for Occupy?”