By Mary Nichols, Gina Ronning, and a committee of people honoring the houseless. 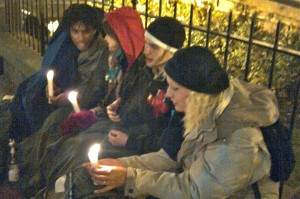 Mary Nichols and Gina Ronning are two of the thirty-five people who participated in an all-night vigil at Pioneer Square, honoring the houseless. Nichols says they lit about a hundred candles on a low brick wall on the 6th Avenue side of Pioneer Square while thousands were arriving for the lighting of the Christmas tree. Nichols says, “At the time the holiday crowd was arriving, we had two bells jingling, but otherwise we were silent, unless people asked about our signs.”

According to Nichols, “Hundreds read our signs, and at least thirty people read my very long sign on the harassment of homeless people.” 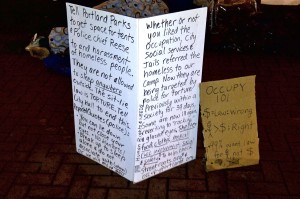 After 10 p.m., when the tree-lighting was over and the crowds had left, a group of  about twenty Occupiers who had been at the Spokes Council earlier came to join the vigil. They brought food and coffee, and they lit candles and stood in solidarity with the vigil-keepers for a couple of hours. Two who had come from Spokes Council had hand-drums. 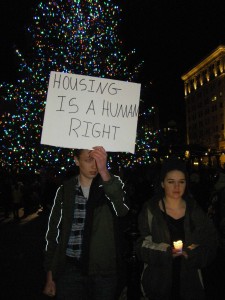 One was the Occupella orchestrator, who brought some alternative, anti-materialistic Christmas carols with him. He asked a few people with candles to sing the carols, and he filmed the singing. The group from Spokes Council stayed for a few hours and then left, and their joyful energy helped the vigil-keepers make it through the night.

Ronning says people were great about supporting them: “An occupier by the name of Scott showed up at 3:30 a.m. and brought us muffins, coffee, and tea. Soon after that, woman with a dog showed up with pretzels and more candles. A lot of folks came in for a few hours to sit and chat with us for a while, which helped us stay awake and alert.”

At midnight a security guard, who had been anxious all night about the candles, asked the vigil-keepers to move away from the sidewalk surrounding Pioneer Park, claiming the sidewalk was private property. The vigil then moved across the street to the other side of 6th Avenue, by the Courthouse. Nichols reports that a police officer told them they would not be bothered there, and some stayed until 7 a.m.

Signs from the vigil to remember the houseless.

Nichols explains, “While we were still up by pioneer square, I told two reporters that some of us were there to help eyes open because then hearts will open. When hearts are open, our community and creativity will lead us where we need to go. I believe that Portland can end homelessness. But it all begins with really seeing the people who are homeless, which is what our candle flames stand for.”

A woman who had never been part of the Occupy movement, and was herself houseless, came to talk to the vigil-keepers at around midnight. They enjoyed a pleasant conversation with her for about an hour, and early in the morning she lay down behind them and slept in the safety of their presence. Around 1 a.m., a homeless man joined them and chatted for a while. He pulled out a crumpled, folded piece of worn typewriter paper with a quote from Mother Theresa that he keeps with him at all times. “The good you do today, people will forget tomorrow. Do good anyway.” 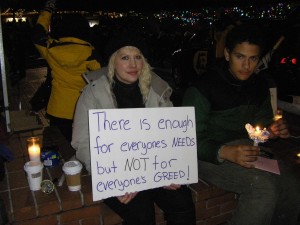 Nichols says it was a long but beautiful night, and the project is just beginning.  “I want to keep talking to the public and raising awareness about homelessness and the meaning of light-for-life. It isn’t merely a one-time vigil. It’s a creative, loving way to raise awareness to the level it must reach so our hearts can take us where we need to go.”

The Oregonian, which initially garbled some of the facts about the vigil, published an online photograph here (and still failed to read the sign correctly) . If anyone has good photos of the vigil, please send them to [email protected] and they can be added to this story (with attribution, of course).

The Vigil was not a GA-sponsored event. It was the work of autonomous people in sympathy with Occupy Portland.