Portland’s first big planning meeting is this Thursday, come and get plugged in to a working group. We need you! 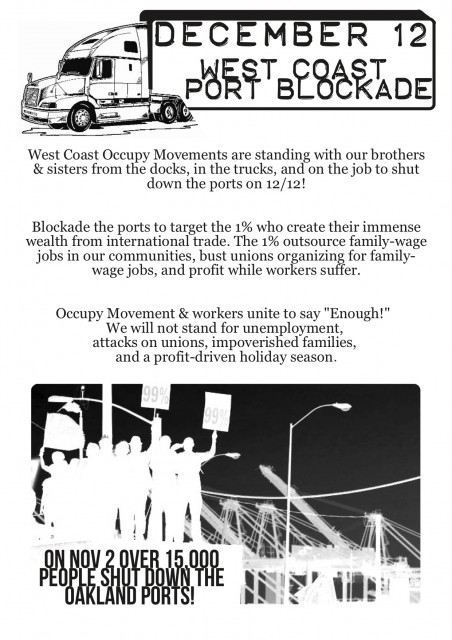 What will happen on Dec 12:

We will stage mass mobilizations to march on the ports, create community pickets, and effectively shutdown the hubs of commerce during this peak holiday profit-making season.

The ports represent commerce and capital. This is how the 1% create their immense wealth. It is critical to stop business-as-usual for the 1%, and to disrupt their ability to make money at the expense of working people.

The holiday season has been exploited by the 1% to make money off working people.This is a peak business time for the ports and the wealthiest corporations. Holidays are about family & community not wealth and exploitation.

The truck driver union in Los Angeles has called for solidarity as they struggle with the LA ports. We stand in solidarity with them, and all workers fighting for democratic workplaces.

Are the unions calling a strike?

No. In this instance the unions are not able to publicly support this blockade for fear of legal action from the 1%. However, rank-and-file union members, workers, and the unemployed are all part of the 99% and have consistently shown support for the Occupy Movement. Union members have the right to free speech & assembly and are leading the way for this blockade.