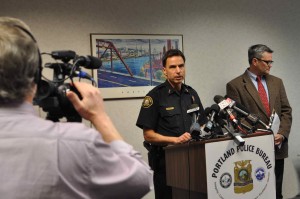 A conversation with Ted Clark and James Schwartz

Ted Clark doesn’t believe all he hears. When he read reports that one of the reasons why Sam Adams decided to evict Occupy Portland from its encampment was that the City of Portland and its Police Bureau claimed Occupy had sparked an “increase of crime,” he didn’t believe it.

“I never saw any information to back up that claim,” he explains, “so I decided to investigate for myself, using their own statistics on Crime Mapper It turns out it was all a lie, plain and simple. They lied, and they knew they were lying, and they made no attempt to document their evidence because they knew the evidence would prove them wrong.

“The Mayor and the Police Chief lied to the citizens of Portland regarding the crime issue. There was a decrease in crime in other areas of the city, and overall, even accounting for a few areas of increase near the encampment that might be simply due to the increase in population density, there was an overall reduction in crime. I have files with all the maps for all the crime categories.”

The fact that Adams and Reese lied to the people of Portland makes Clark angry enough that he feels Sam Adams ought to fire Mike Reese and then resign from office himself. But that’s not all that makes Ted Clark angry. He’s also furious about the way the police looked the other way when abuses were happening at the encampment.

Clark explains, “There were cops, both undercover agents and uniformed cops, right in among us at the encampment for weeks on end. Some crimes did occur at the encampment, but nothing was done about it. The cops stood around and picked their noses and ignored the crime. They did nothing about it. And why was that? Didn’t we deserve to be protected and served?”

Clark explains that his information is freely available to anyone who wants to do the work. It’s not hidden. It’s not subject to question. It’s all right there in the numbers.

Occupier James Schwartz is struck by the violence of shoppers on Black Friday and the fact that the police and city governments don’t seem to view that as a problem. He says, “Now let’s look at Black Friday. Corporations and big box stores create a frenzy for products by limiting quantities to less than they think people will buy. They know their Black Friday sales will cause a massive influx of people into their stores, yet they don’t provide the proper level of safety and security personnel, and they allow numerous outbreaks of violence by customers who are attracted to these deals. If anything, the violence hypes the merchandise. Somebody thinks, ‘If people are willing to fight for it, maybe I need to get some of it too.’

“Why is it we didn’t see police in riot gear at the big box stores? Why is it that people will endanger themselves to save a few bucks, but won’t turn out to peaceably protest the same corporations that are killing jobs, taking profits, and ruining the future for their kids and grandkids?” Schwartz concludes, “If people can get off their couches at midnight on Thanksgiving to go shop, why can’t they get off the couch on a Saturday or Sunday afternoon to peaceably protest the corporate greed that enslaves us all?”

12 comments for “Mayor and Police Chief Lied about Crime”