Mark Kronquist does not endorse Occupy Portland, and he has some fairly serious ideological differences with our movement. (See his artist statement, below.) But he identifies himself as “Photographer, Historian, and Oregonian” in that order, and he had the opportunity to shoot 12,000 digital pictures of us in our encampment, doing what we were doing in front of his very fine lenses. Then he went to the trouble to collect some of our battered, water-logged, but very original signs, something we failed to do ourselves after spending Saturday night and Sunday facing the riot cops. Kronquist will be donating our signs to the Oregon Historical Society after his show closes.

His show opens on First Thursday, December 1, 2011, and runs from 6 to 9PM at 625 NW Everett Street Gallery Number 108. His photographs will be on sale, and he intends to donate 25% of the proceeds to the city’s cleanup of Chapman and Lownsdale Parks. 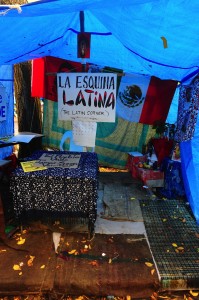 The following is excerpted from his artist’s statement, which he authorized me to print in The Occupier, along with the photos in this post:

I am a 4th generation Oregonian who loves history. So much history, event recent history, has been lost (for example there is no list of the bands that played at the only state sponsored Rock Festival, Vortex in Estacada in 1970).

When the Occupy Movement came to Portland I decided to make it a point to capture what I could for myself, for my friends and for history. I am fortunate that real life responsibilities enabled me to trek to the Occupy Portland Camps most days and to spend some time at most significant events.

I do not agree with many things about the movement, and I think Occupy proves that you cannot build a successful society without some form of leadership, accountability and policing authority.

That said, I admire Occupy Portland and The Occupy Movement for what it did accomplish. At  the height, Occupy Portland was feeding 1,500 meals a day (the majority of those going to the homeless who flocked to the camps).

A wise old sage named Wayne Linderman, once said taxes are the dues each of us need to pay into our country club to make sure our country club remains a place we want to be.  Apparently, collectively, we seem to want a mini-putt behind a Steakburger,,,rather than a proud place to call our home. The lack of government is not Nirvana, it is anarchy…we saw this just a decade ago in Bosnia.

Occupy focused our attention on social issues, Seven Oregonians die of overdoses each month. Fortunately they are on page B32 of the Oregonian and we do not have to stop eating our McRib Sandwich or watching American Idol to take note…but when three OD at Occupy, they make the news. Same with homeless vets, foreclosures and many other uncomfortable issues.

Because we are human these people, these problems and these issues will always be with us.

Perhaps, like those who chanted “Die, Die, Die, Let Him Die” at a recent debate, we will decide, that, as a society, we want to euthanize these people. If that is the society we, as Americans want, that is America’s collective right, but my passport is at hand and I  will not be a part of it.

It is my hope that the Occupy Movement has moved our debate beyond that to a realization that, as a society, we have an obligation to help those who may be different than we are. That, in the words of Dr. William Blatchford, each day we wake up and realize that we sit at at table of abundance with enough to share rather than a table of scarcity where we must endlessly fight one another for every last bit.

I created 12,000 images, Minox to 4 x 5  film and Nikon D200, D2h, D2xs and D3 digital, at  Occupy Portland. These few are my attempt to share with you and to preserve for our future what I witnessed…the police officer scooping a protester from in front of a Max train and being rewarded by a hug…the joy of kids in the kids camp, the creativity of the art camp, the peace on a Vietnam Vet’s face as, for the first time in 13 years, he had a safe place to sleep and saw a doctor. The smile on a Police PIO Face as she worked with lovers in a Papa-San Chair on Main Street to open the street. Agree or disagree, Occupy Portland Camps are now a part of our shared history.

3 comments for “Pictures of Occupy Portland”