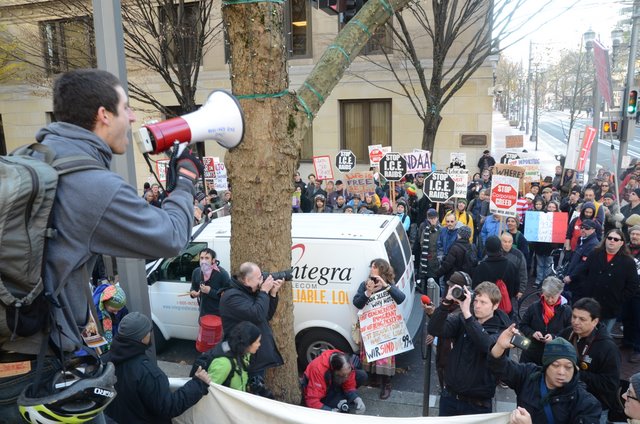 Thomas Jefferson wrote in the Declaration of Independence:

We hold these truths to be self-evident, that all men are created equal, that they are endowed by their Creator with certain unalienable rights, that among these are life, liberty and the pursuit of happiness. That to secure these rights, governments are instituted among men, deriving their just powers from the consent of the governed. That whenever any form of government becomes destructive to these ends, it is the right of the people to alter or to abolish it,

Which side of history do you want to be on?

Do you want to be on the side that defended a corporate-owned government, and toxic concepts like corporate personhood, or the side that altered that government to make it one that puts people over profits, and one that provides “liberty and justice for all” regardless of skin color, bank account balance, gender, or connections with investment bankers?

Hopefully most people will choose the latter option.

Do you want to be among those whose hearts and minds were co-opted by corporate interests to put down a movement that has the potential to keep America from becoming a police state with “liberty and justice” for only those running the Ponzi scheme, or do you want to be among those who acknowledge the ugly reality of exploitation of the many by the few, take the red pill and connect the obvious dots?

Once again, hopefully most people will choose the latter option.

In America’s Revolutionary War there were tactics and approaches by the Rebels that inconvenienced, annoyed, and confused the general public. Did that nullify their cause?

Apparently the corporate-owned media thinks there is. Do you as well?

It is not the critic who counts; not the man who points out how the strong man stumbles, or where the doer of deeds could have done them better. The credit belongs to the man who is actually in the arena, whose face is marred by dust and sweat and blood; who strives valiantly; who errs, who comes short again and again, because there is no effort without error and shortcoming; but who does actually strive to do the deeds; who knows great enthusiasms, the great devotions; who spends himself in a worthy cause; who at the best knows in the end the triumph of high achievement, and who at the worst, if he fails, at least fails while daring greatly, so that his place shall never be with those cold and timid souls who neither know victory nor defeat.