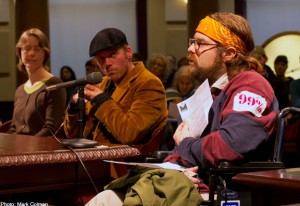 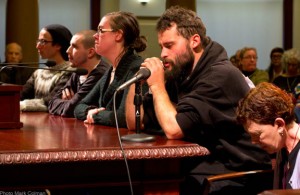 NB:  I removed this article the day after posting it (December 15th) in response to a witness of the events and friend of Justin James Bridges contacting me, concerned that Larry Thompson and John Swilley (whose last name I spelled wrong in the original article) had in fact witnessed another man, Charles Stubbs, being neglected by professional EMTs. I have since followed up on this, and it seems to be the case. Though their testimony, with the new information, changes the circumstances, it seems to me that the substance remains the same: whoever it was on the ground in front of Larry Thompson and John Swilley, professional public servants refused service to a critically injured person.

Here is the article:

I spent all yesterday preparing for a presentation to the City Council’s open hearing on police accountability that I was sure was supposed to be today only to find out that it had already happened. Now that I’m free of that responsibility, I have 3 minutes and 40 seconds of audio that I edited all afternoon, and no one but the internet to present it to.

I conducted these interviews on November 15th with the intention of writing an article soon after, but I’ve been waiting for additional information which hasn’t been forthcoming from public records, in regard to an emergency call that, so witnesses claim, was made and shortly cancelled. At the last open hearing on police accountability, Mayor Adams assured me that, if I could cut 21 minutes of raw audio into 3, he’d let me present it. After listening to the interviews over and over, it seemed to me that the most striking points were these: the professional EMTs were not allowed to approach Justin James Bridges as he lay on the ground in critical condition because the police cancelled their emergency call; the police and professional EMTs did nothing until the media was present; the media didn’t approach this as a story until some concerned citizens forced it to.

In my editing, then, I tried to bring these points to light. For my own accountability, I also provide the raw audio and encourage you to listen to it before making noises about manipulation.

I also wrote a statement which I intended to read to the council. Again, I missed my chance, so here it is.

Before I begin I would like to remind all present that on November 24th, the General Assembly of Occupy Portland released a statement condemning police violence, and requested that, because Chief Mike Reese is no longer running for mayor, the funds collected by his fundraising committee, “Friends of Mike Reese”, be reallocated to organizations dedicated to helping the economically underserved, and that any officers who benefited from the glut of overtime pay as a result of Chief Reese’s unnecessary deployment of police forces create a fund for the benefit of these same organizations.

It is clear that independent witnesses play a necessary part in the responsiveness of both police and media. On November 15th I conducted two interviews with three people who had witnessed the inactive presence of the EMTs in response to the injury of Justin James Bridges. In my presentation of these interviews, one of the things that you will hear is that the presence of the channel 8 camera was instrumental in the decision of police and medical professionals to act, and that the camera wasn’t present until concerned citizens ushered it over. Mayor Adams requested that in the interest of time I cut the interviews down from 21 minutes total to 3. The full recordings will soon be available at www.portlandoccupier.org. The names of the interviewees are Larry K. Thompson, John Swilley, and Jacob Sherman, and my selection from their recorded testimonies follows.

Here is the dropbox link to the combined and edited interviews.

Here is the dropbox link to the interview with Larry Thompson and John Willey.

Here is the dropbox link to the interview with Jacob Sherman.

There is a clear conclusion to be made from all of this: independent oversight is necessary. Or, said another way, police without it are dangerous. This is what the Occupy movement is trying, broadly, to address. If the public knew the extent of political and corporate collusion that occurs as a matter of course, or of the routine failure of police departments across the country to meaningfully investigate cases of police brutality, they would much less readily accept their power. It is the duty of the press to bring this information to the public.The establishment of a free press was meant to ensure that the public be made aware of those things not which it wanted but which it needed to know—that is, it was meant to be that very oversight aparatus. Yet as one of the interviewed states, it was not until he forced the camera operator from channel 8 to witness the EMTs’ neglect that anything was done. I am not suggesting that official citizen oversight should be more strictly established. I am suggesting that when oversight is made into an official body, such as our press, it tends toward laxity and corruption. The solution is for the power of strictly independent, unofficial oversight to be recognized, and made the highest responsibility of the people themselves.

8 comments for “Witnesses: Injured Man Went Unattended For Half an Hour Because the Police Cancelled the Emergency Call”