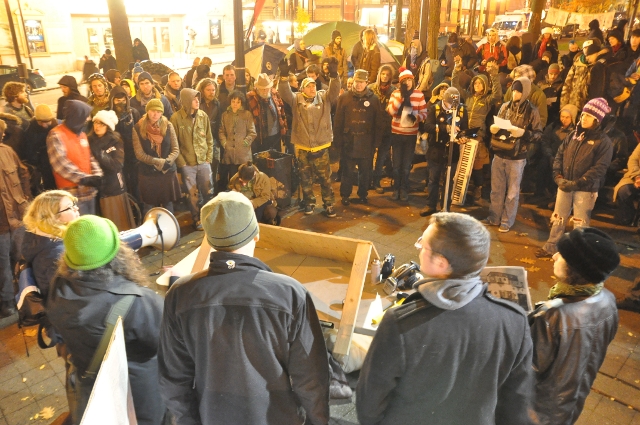 As a member of the media, as a contributor to the linguistic and philosophical discourse emerging from the Occupations, and as point-of-contact for The Occupier, I’m constantly confronted with one of my main frustrations throughout the two months I’ve been involved in this Occupation: I can’t stand writers who write about the Occupations. This is a very strange sentiment coming from a person who, because of the just-mentioned qualifications, is constantly surrounded by, immersed within, engaged in enabling, and even embodying exactly that: writers who write about the Occupation, and that writing that they produce.

On The Occupier, we post many different types of articles. In addition to the news and current events of the Portland Occupation, we post many more editorial style pieces. Some are letters and general opinion style sentiments, whereas others are deeper investigations into strategy or tactics. We like to have a variety. One of the main goals of this publication is to give a voice to the individuals making up the movement, and not adopt a solid editorial voice, GA-endorsed or otherwise.

The downside of this, of course, is that we end up presenting a characteristically diverse, un-unified voice, just like the entire Occupy movement around the world. We’re fine with it–after all, this diversity is something that we celebrate, and the different individuals taking part in our movement bring many different ideas and strategies to the substance of what it is we’re doing, all of which has aided us so far, in making us adaptable, evolutionary, and horizontally mobile. But if one was looking to identify a “party line” or some such media-ready, “coherent argument”, then one would be better off going back to the status quo of party-politics and plank/platform media echo.

All of which would be fine, if it wasn’t for writers. It’s one thing for all of us, and by that I mean any of us, to write something about the Occupation. These are the voices of the movement, and when we represent ourselves, we are making the movement. But then, we feel the need to turn around and write about it. And because we are writers, we try to sum up the issue. We identify a few easily relatable categories and ideas, and reduce the entire thing down to a piece of writing. And the movement is anything but a piece of writing.

This may seem like some sort of post-modern, meta-issue, wherein trying to talk about something destroys our ability to talk about it, and we are left tumbling through a negative theology of general wills and incoherently uttered political feelings, rather than actually having anything to say. But the problem is really far simpler: writers who write about the Occupation always write something wrong.

Let me show you what I mean. Watch here as Vinay Gupta, a writer of many reasonable and clever things, writes about Occupations and by doing so, completely misses the point:

Next year, I’m going after #Occupy. The current political culture inside of #Occupy is dangerously shallow. If we get large scale economic breakage, and Occupy goes from being 2,000 people in New York to being 200,000 people, if it becomes the army of the dispossessed, the Tyranny of Structurelessness is going to be an immense bane, as a lot of angry, frightened people get together in a non-democratic environment and attempt to figure out where to apply their political weight to get solutions. There’s a name for that: it’s called a mob. We can, and must, do better than first-past-the-post voting every four years for leaders pre-selected by political power elites and corporate-controlled media. But we must also do better than small groups of people waving their hands at each other at emotive appeals.

Structurelessness would seem to be that “characteristically diverse, un-unified voice” I cited above, when characterizing the presentation of the writing by and for Occupiers, such as those writings collected in this publication. But the problem is this: anyone who has taken part in an Occupation (which one would assume might be a qualification for writing about it) could tell you that the Occupation is nothing like that. It is very unified, even as it is distributed. If anything, it has a surplus of structure, even as it is separated and horizontal. There is a danger of the mob here, just like anywhere (and I have looked it square in the face on multiple occasions) but this is not a mob. It is a movement. We know what the difference is. A mob does not argue about procedure and process, it does not have outreach committees, it does not critique itself to see if it is doing too much self-critiquing.

The problem is, perhaps, that “structureless” appears most often in writing about Occupy as a pejorative word. When we wish to speak of the brokenness of the horizontal structure that exists, we speak of the “lack” of structure. There is a structure, of course, it just isn’t functioning as we’d like. When it isn’t functioning, our mind seeks a return to the familarity of class society. We seek the “formal” structures, rather than “informal” ones; we are used to the more vertical structures in society, and are told to trust them. After all, it is the vertical structures that reward us with perks like the “middle class” when we defend that sort of organization. Compared to the pomp and circumstance of vertical structure, horizontal structure may indeed seem to be non-existent, or structureless.

We know what real structurelessness looks like, and it is nothing like Occupy. It is that “mob”. But we don’t refer to the horizontal structure of, say, choosing at which bar to meet with friends as a “mob” action. We wouldn’t call a couple making a joint decision “structureless”. We just wouldn’t treat it with the same societal respect, as, say, the way we trust rich people to make decisions for us just because they are rich. And that is the definitional pattern we wish to change.

The number of incredibly talented and intelligent people down here working on this project boggles my ability to gush laudatory kisses on all those who deserve it. I never once used a “best minds of my generation” line in earnest before I came to the Occupation. These are the organizers here: scientists, engineers, literary minds, politicians, and people of incredible industry. And of course, there are those who are less talented, but mean no less well. But this is society. It is not a segment or a sliver; those who Occupy are not simply the disoriented, the disillusioned, and the discontents. We are everyone, just currently a limited number of everyone. If society ever had a chance to save itself from its own challenges, it would happen at Occupy. We are turning away from the vertical structures that have spurned us, and building out those horizontal ones that are far more resilient than we ever knew. There is no larger group or organization, no super-structure to appeal to, no saving, coddling arms of the State or Supra-State. There is only us, and then more of us, as more people have nowhere else to turn. We are the ones who have realized that there will soon be no structure other than that we are building. And so, we have gotten to work.

So then, why do we write in such a way that we present the structure of the Occupations as structurelessness? We spend all day organizing, and then write about how loosely organized we are. Why do we never tire of presenting ourselves as an organic movement that “flows like water”, as people who never were involved with politics until a few months ago, as a “diverse, un-unified” group, as something tangential, tactically horizontal, asynchronous, rhizomatic, and all of these other Deleuzian buzzwords of loose-network zeitgeist?

Well, for one thing, we love the loose-network zeitgeist. But even with that set aside, this is a characteristic imbued to the Occupation by the fact of our writing about it–not because of any mistaken description. If we wrote in any sort of detail about the sort of organization we are doing, we would be penning an incredibly complex document. It would be almost useless to the reader, who would save time by not reading about the Occupation, and just go on down and start getting involved so he or she could see first-hand. The opposing possibility is an abstraction: a short piece that barely scratches the surface of what is going on, and unfortunately, gets less-than-accurate in this short schrift. Not just a single faulty abstraction either, but a plethora of them, as every writer with any interest in the Occupation adds their piece to the pile and we end up as many tiny crystallizations of the movement as grains of sand on a beach, spreading the discourse thin and sliding, like gravel on asphalt.

One could forgive this thin paste of discourse as the output of writers without time or need to really write the full history of the Occupations, who are instead giving their elevator pitch on the movement. They don’t intend to explain it. They want to put the idea out there as quick as possible from their own unique perspective, in the hopes that those who hear a fragment of resonance get on down to the Occupation itself. These writings are text messages: “get on down! We’ll talk about it more when you get here.” If I had a goal in my task as point-of-contact, it would be to be the best short messaging service for the Occupation that I could possibly be. I aspire to be the discursive Twitter API for Occupy Portland, and nothing more. If I could be half as effective as a 140 character message, I would be effective for this movement indeed.

But the problem occurs when the writers, like myself, engage the writing. We see the words we have written, and momentarily forget that they are only words. We see the protest signs, and think they are what we are doing, and not just signs. I even forget my own role as propagandist on occasion, and forget that despite all the inspiration around here, there are serious difficulties that we have in and among those talented folks that constitute the Occupation–that is to say, how dense the challenges of society are. These are challenges that aren’t going to work themselves out in writing, or even in writing about writing. If they were, then society would have fixed itself long ago. When we start talking about only what we’re talking about, rather than talking about what we’re doing, then we get off track. In writing, the structure that we’re building takes the back seat, and indeed, things begin to appear structureless.

And so, I like writers who write about the Occupation best when they aren’t writing about the Occupation–for instance, when they are actually occupying. And yet, I love writers! I love writing. And most days, I make my Occupation by helping writers write, and urging them to so better and more often. So where does this leave me? I’m at the end of writing an op-ed about how one ought not to write about writing. If I knew what it was I was trying to achieve by writing this, I might say that I had succeeded. But alternately, if not being able to articulate exactly how one ought to write about the Occupation make a reader like yourself take me less seriously, then let me say this–let’s write more. The only way to Occupy better is to keep Occupying. I think that those of you that know what I mean, will understand what this means.