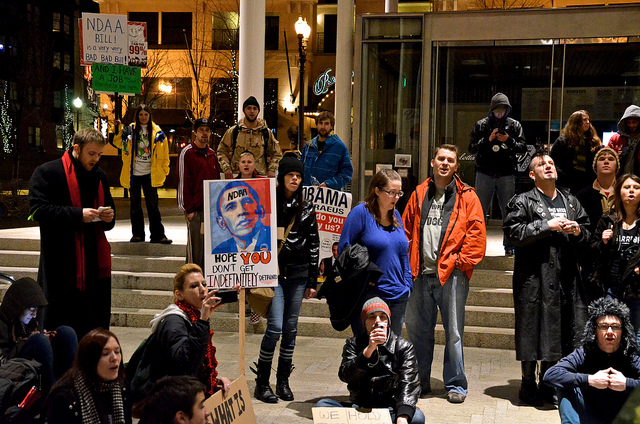 In a government purported to be “of, by and for the people,” one would expect amassing in these numbers, at that pace, across all regions, ages and strata, to be at least worthy of an exploratory meeting, if not a speedy redress of grievances altogether. After all, isn’t this the former Chicago community organizer who audaciously advertised himself as “Change We Can Believe In,”? The familiar Obama charm, usually on full display when it’s time to the serve a doting public their imperial marching orders, was conspicuous in its absence. Couldn’t have Lutz or Axelrod been called in to help green-wash the crumbling façade, to perhaps revive one of Captain Congeniality’s most placating moves, the “Have a Beer with Me” program? We know the drill: Schmooze a few “random” Occupiers (no leaders), dredge up a few Wall Street fall guys, slap a few wrists, spout the usual token lip service regarding accountability and reform, elevate a few industry retirees to first write the blameless post-crisis report and then staff the toothless oversight committee with more friends and cronies to cement the charade of change…

Alas, it was not to be. By mid-November, the Trilateral Bilde-Mason-Fellers, or whoever, had seen enough.

As quick as the tents went up, down they came. Violently if necessary.

Every city occupation named above and hundreds more are gone. Every encampment larger then Providence, larger than Boise, crushed. Most large cities have tried re-occupying on multiple occasions with no or little success. OWS, Oakland, Portland, Seattle, San Francisco, Phoenix, Erie and LA in particular have the object of unremitting police antagonism, among many others.

Reinforcing the case for Occupy, President “Obummer” answered to his country’s donor constituents rather than the majority of citizens about the mess. The constitutional scholar found nothing incompatible in his teachings with soft-pedaling a PERF-infused eradication by militarized riot cops, regardless of cost, to remove all his county’s protesting citizens.

Abroad, he maims kids with cluster bombs & depleted uranium shells and kills them with drones, helicopter assassinations and war crimes. At home he tortures the whistle-blowing heroes who expose it. He violently crushes social justice movements “peacefully demanding a voice in a corrupt and broken government” in his own backyard while praising Egyptians on TV “peacefully demanding a voice in a corrupt and broken government” in the middle east. (All while selling Egypt’s SCAF killers tear gas, from Pennsylvania.) And anyone who might want to say something can shut the fuck up about it– NDAA, SOPA, FEMA camps, whatever, he’ll make up a new acronym if he has to to take that right away. It’s okay, he’s a “Constitutional Scholar” or something. Besides, he’s promised to reinstall those pesky habeas corpus perks for the rest of the good, non-terrorist, REAL Americans, just as soon as he rounds up the last Occupy.

This is why we occupy.

The goal of the “governors conference call,” the subsequent crackdown, and the continued eradication of any re-occupation toehold, no matter how tenuous, was and continues to be the same: Destroy any habitable occupy operational and community resource facility.

Within the United States, not since the secret campaigns to destroy “Redwood Summer,” AIM and The Black Panthers has there been such systematic and coordinated disruption from law enforcement. Government strategy, whenever possible, is to leave protesters alone, deliberately. Lack of response marginalizes protesters, de-legitimizes them, and costs nothing to boot. Protesters get to march around waving signs until they’re winded right up until the social costs incurred allowing them to create awareness tallies and exceeds the financial and public relations costs to remove them. Only real success getting “Off the rez” brings out large scale countermeasures. Systematic and widespread camp annihilation from local police municipalities using vast stores of riot resources at great public relations risk isn’t a move made had the camps themselves not been dangerously disruptive to the State machinery.

On this basis alone, the influence and benefit of highly visible, centrally located, fully-powered overnight camps and community resource centers like occupy can hardly be underestimated. Effective proletarian entities do not challenge empire frequently – undercutting established societal norms/systems, feeding the marginalized, building communal inroads in sympathetic poor and privatized communities and in general occupying the moral high ground non-violently all while staying on message is a delicate balancing act. To again occupy downtown, in highly visible spaces, to engage friend and foe alike, with stability, from a “camp,” should be of great importance to Occupy everywhere once the weather turns. Just follow the money.

All this, for a four month old movement. (For the Tea Partiers reading along, if it was a baby, it would be in it’s 17th week, just past its first trimester…)

“Your occupy’s skeleton is changing from soft cartilage to bone, and the umbilical cord — It’s lifeline to the 99% community — is growing stronger and thicker. Your occupy weighs 5 ounces now (about as much as a turnip), and it’s around 5 inches long from head to bottom. Occupy is accustomed to the strong beating of your heart, blood rushing through your veins, and your stomach grumbling. Occupy can also discern sounds outside the uterus, like your voice and music. On average, most moms are feeling their little Occupy by week 17. Kick, little one, kick!”

-6 words were changed from the 17 week baby calendar above.

As a front line Occupier in one of the aforementioned large scale and suddenly camp-less metro occupations, I too am licking my wounds at the onset of Occupy’s “Valley Forge Winter” with my brethren. We are cold, scattered, fragmented, un-unified, and scrambling for numbers. Yet, beneath the permafrost, there are signs of hope….