For a movement that started with one strategy and a couple of slogans, Occupy has preformed brilliantly. Having based itself on the examples of Egypt and Wisconsin, the Occupy Movement has raised the political consciousness of millions and created a large layer of new activists. But the uninterrupted string of successes of Egypt and Tunisia haven’t materialized for Occupy. We’re in a lull period. Next steps are being considered and some tactics are being re-thought.

This is where revolutionary theory comes into play: a set of ideas that help guide action. Sometimes theory is learned unconsciously, where it resembles a set of non-ideological “assumptions” about movement building and politics. Occupy’s theory began mostly with assumptions, many of them true.

One assumption was that previous political theories have failed — that past social movements contained deep ideological flaws. There is more than some truth in these conclusions, but other truths need to be thrown out.

The youth who built Occupy were born as the Berlin Wall was falling; “communism” had failed. Mass disillusion followed the loss of a socialist movement that had inspired dozens of revolutions in Asia, Africa, Latin America, and Europe when half the globe declared itself “for socialism.” Many socialist-leaning countries inflicted heavy damage on capitalism while a few crushed it outright.

The United States spent the 20th century fighting these movements: the Korean and Vietnam wars, the failed invasion of Cuba, the dirty wars in Central America, countless CIA coups in South America, Africa, Asia and elsewhere (the history of the CIA is a history of fighting “socialism” by any means necessary). A U.S. domestic war was waged by the FBI and police against socialists and other left activists during McCarthy’s Red Scare of the 1950s. Nuclear war against the USSR and China was a button push away during the Cuban Missile Crisis. All of this madness was in the name of fighting socialism and revolution.

The motivation behind U.S. wars against these socialist movements was not irrational. A very real fear existed that capitalism was in danger–that corporations would instead be run for the public interest. In some countries capitalism was destroyed. But what replaced it seemed no better, and in some cases worse. Why? The popular (corporate) explanation is that any break from capitalism equals “authoritarianism.” Another popular argument is that without rich people running the economy it would cease to run; there is no alternative to capitalism, we were told.

To this day no wealthy country has had a successful socialist revolution. Many have come close, especially several European countries before and after WWI and WWII. The 1968 general strike in France pinned capitalism to the floor, but its life was spared; corporations were allowed to continue to run social life; the super-rich remained so.

Real socialism cannot exist in a poor country. If Haiti implemented a “socialist” economy tomorrow it would still suffer under post-earthquake rubble, mass homelessness and life-sucking poverty. A “healthy democracy” cannot exist in these conditions. A socialist economy cannot transform mud into gold.

But capitalism took centuries to transform poor countries into rich ones, and even today a tiny minority of rich countries dominate a hundred plus poor capitalist nations. Poor capitalist countries — like their poor socialist counterparts — suffer from a chronic democracy deficit, forever destined to remain poor.

If Haiti were to leave capitalism, however, it would be allowed to escape the profit motive of development; items could be built with social need in mind, not simply profit. China and Russia were able to develop into powerful countries by escaping capitalism. Eventually, however, their undemocratic leaders decided to give capitalism a second chance; these leaders wanted to exchange their bureaucratic privileges–access to better food and nicer cars, etc.–for the billions of dollars that come with ownership rights (it’s no coincidence that China and Russia are #2 and #3 on the “nations with the most billionaires” list).

Occupy is right not to embrace the fake socialism of the past, undemocratic as it was. But past socialist experiments contained progressive elements that shouldn’t be forgotten.

For example, revolutionaries learned that they could not let a tiny group of super-rich shareholders own and run giant corporations that employed thousands of workers and made socially useful goods. Instead, these companies could be made into public utilities, run by the workers, engineers, and office staff that already do all the work for the benefit of society in general.

Revolutionaries also learned that organization and collective action was instrumental in overcoming the organized opposition of the rich. Capitalism can only be overthrown by a real revolution that draws into action the majority of working people, using the tactics of mass demonstrations, mass strikes, mass civil disobedience, and other mass actions that help to give shape, organization, and unity to working people. Once a powerful and united movement emerges, it must ultimately challenge the corporate elite nationally, which means wresting the levers of state power from their hands and using new organizational methods to make the post-revolutionary country more democratic. 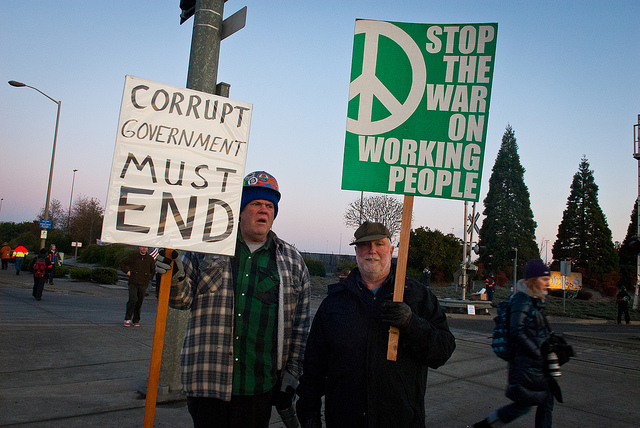 How have these lessons been ignored by Occupy?

In reaction to the non-democratic USSR, Occupy eschews “centralization” in favor of “decentralization.” Instead of decentralization simply meaning “democracy,” in practice it often means “disorganization” and extreme individualism. Any powerful social movement must inevitably be organized; and although Occupy seems to realize this with its useful experiments in direct democracy, the movement as a whole remains incredibly disorganized and uncoordinated.

This is important insofar as disorganization prevents collective action. The Pre-Occupy Movement — what little there was — consisted of “issue-based activism,” i.e., different groups working disconnectedly towards various goals. Occupy has the power to change this, to create real power for working people. Initially, Occupy had united all the various left groups while bringing in new blood. But the old habits of issue-based, fragmented activism were hard to break.

Many Occupiers are content with “autonomous” actions, i.e., small groups acting independently of a larger body towards various ends. Small actions have their time and place, but a powerful movement is one that inspires. Working people are given hope when they sense that a movement is able to achieve victories for working people, i.e., when it is powerful. And working people are only truly powerful when they are united and acting collectively in massive numbers (the corporate elite uses divide and conquer tactics for a reason).

One reason that Occupy is fearful of centralization (organization) is because being organized inevitably creates leaders. And since much of Occupy is “anti-authoritarian” (again in response to the failed USSR), “leaders” are not welcome. But leaders exist within Occupy regardless of intentions; saying that Occupy is a “leaderless movement” does not make it so.

The inevitable leaders of Occupy are those who dedicate their time to the movement, organize events, are spokespeople, those who help set agendas for meetings or actions, those who set up and run web pages, etc. In reality there already exists a spectrum of leadership that is essential to keeping the movement functioning.

Occupy needs both leaders and organization while still operating entirely democratically. It already has leaders who refuse to accept the title as such, much like Noam Chomsky does, the famous anti-authoritarian and leader of the anarchist left, who thinks that by saying he is “not a leader,” he ceases to be one. In reality his massive authority continues to exist outside of his humble intentions.

Occupy seems, at times, so fearful of power or creating leaders that many Occupiers would focus on neutering the movement, so as to prevent Occupy from ever having real power, and therefore preventing the movement from ever making real change. The left has long suffered from the self-induced fear that, if we have actual power, we’ll become like our oppressors, since “absolute power corrupts absolutely” (a hangover from yet another shallow analysis of past socialist experiments).

In Occupy, this expresses itself by a fanatical fear of the movement being co-opted. Yes, Occupy should be wary of Democratic Party representatives in sheep’s clothing, but this fear has infected and has spread throughout Occupy and now includes internal finger pointing and accusations of “co-opting,” creating more unnecessary divisiveness.

It is a healthy impulse to strive towards greater democracy and away from charisma-based leadership, but any idea taken to its extreme can become nonsense. To denounce real organization and leadership “on principle” is to vastly oversimplify the real processes of movement building while erecting unnecessary barriers in Occupy’s path to real power. To self-mutilate a movement because of leader-paranoia is similar to euthanize a puppy because of its potentially dangerous sharp teeth. In fact, true leaders can only emerge in the context of real democracy; both need the other.

There is no blueprint for movement building, but general principles can be erected based on the revolutionary experiences of the past. The key strategies of Occupy should be based on those ideas that unify and promote collective action against the 1%.

Ultimately Occupy needs to organize for power; we need a greater power to displace the current power of the 1%. This doesn’t mean that we must adopt the same forms of power utilized by the state, but that new ones must be created, while using EVERY opportunity within the existing structure to organize, educate, and mobilize working people.

Luckily, an upcoming action has the potential to put the above ideas into action. The current struggle of the Longview, Washington ILWU Local 21 is a chance to see real power in action. The Longview Longshoremen have asked for Occupy’s support to create massive mobilizations against the union busting corporate-conglomerate EGT. Hopefully this action has the potential to unite Occupy in practice over a concrete struggle. If the action iseffective it will prove that Occupy needs to organize and mobilize in large numbers over issues that connect with working people-proving that theory is best learned in action.

4 comments for “Theory and Practice in Occupy”