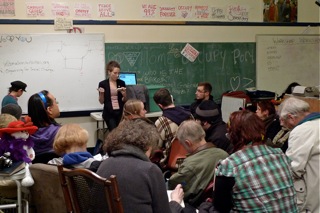 On Friday the 13th, it was a lucky day for Occupy Portland as old friends, long-time neighbors, and the newly curious flooded the St. Francis working space for the Occupy Open House. The Portland Occupation has been indoors in the space for several weeks now, but this event was specifically designed for throwing open the doors to the city and the media, so that the general public could see what Occupy Portland looks like when it leaves the streets, and starts planning for the future.

The office in the Che Room was packed to capacity, and the dining room area in the basement couldn’t open soon enough at 6:30. As the people streamed in, they passed tables laden with donated food, and mingled in front of the plethora of booths set up for committees to inform the public about their current activities.

A video presentation began the program of events. It was a reflective piece, recalling the beginnings of the movement and the encampments in Chapman and Lownsdale Parks. Emotional at times, as many in the room looked back to the original march on October 6th, and recognized the familiar scenes in the camp that once were home. 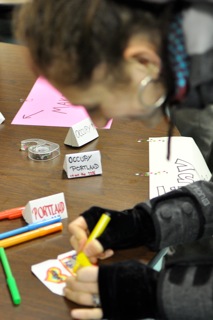 However, the Open House was not to be about the past, but the future. After the video presentation, the program moved into a panel discussion, in which the very first question voiced what the concern that was on everyone’s minds: “What’s next for Occupy Portland?”

The answers came thick and fast, as each member hyped their individual committees’ events, workshops, websites, and notable dates in the future. They unleashed a torrented flood of information, which without pens and paper ready, possibly no one caught. But this is what the event was about–it was about the fact that there is far too much going on at Occupy Portland to track via a single announcement, email, or communique. This event was about the importance of having a public space for the Occupy movement, because this is where people come to be overwhelmed by that flood. Here they were confounded, overinformed, awed, and amazed. But always, one piece of information sticks. One website, one workshop, or one new contact exchange is all that it takes. This becomes the hairline crack in the wall of the mystery that is Occupy, in the eyes of the uninitiated. It is a toehold on the cliff. A tiny beginning, into which one can push one’s fingers, against the status quo of the mainstream. It’s where one begins to break through the media wall, which is all too willing to forget about the realities of our economic system and our pitiful excuse for fair governance in this country, once the spectacle of the parks is gone. And then, the crack gets wider. It spreads, against that whitewashed normalcy, until it is a wide tree of shatter marks, and a fruitful network of action. This is how Occupy began. And this is how Occupy continues. It is how it cannot be stopped.

This is what is next for Occupy Portland. Action–too many instances of action to name or count; too many to recite the litany of bullet point programs Occupy is mobilizing against; too many opportunities for a movement of motivated individuals with a lack of better options to start something new themselves, to be the change they want, now. It’s going to be one heck of a spring.

If there was one small point to grasp from the Open House, it would be this: Occupy Portland launched their own social media site this week, at http://www.portlandgeneralassembly.org. It’s just getting started, but the number of members are steadily growing. The site is like a permanent, online Open House. All the committees are starting groups, and posting their events and projects online. If you missed the Open House on Friday, yours awaits you there. Let the concrete wall fall into a thousand pieces. 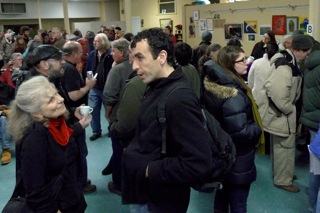 "continuing the conversation" by Kendall