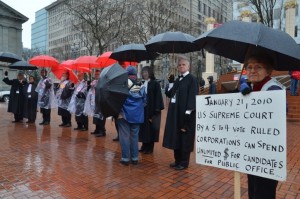 It hit me like it always does as I catch my first glimpse of the gathering, that proud smile I can’t help but wear in honor of those couple hundred people who braved the water logged and drippy day to demonstrate their dissatisfaction with the deities of judicial governance. Two years ago, most authoritative legal body of the land deemed money as free speech, bestowing upon corporate entities an exponentially enhanced voice bearing a potential for volume deafening to all else.

My first visit was with the man at the center of nine robed, thought he looked familiar but he said he was not my friend; he claimed in fact to be none other than Chief Justice Roberts. I couldn’t resist the urge to tell him he was the judge I most wanted to see impeached. He wished me luck. Then I ran into some friends, one of which asked I distribute quarter sheet flyers for the upcoming Occupy the Legislation on February 1st. A task easy to see to when speakers like local radio host Adam Klugman have the growing audience engaged. 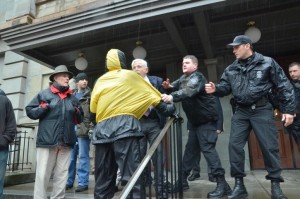 I decide then, it’s time to keep a promise to a peer and interview a pair of gentlemen as to the purpose of their presence at the event. Money tainting the political process is what both claimed a central issue in today’s inequitable world.

A variety of governments at as many levels, from the local to the federal are denouncing the Supreme Court’s 730 day old decision in resolutions across the nation and a betting girl might get tempted to start a pool on whether Citizen’s United survives to see 1,000… but there’s been enough high stakes wagering going on at prices too high to pay.

The rally concluded with a short march across the street and around the corner, which encircled the courthouse block; moments after the crowd collected on the steps at the entrance and moments later a tense moment occurred when protesters were blocked from entering the building. One man was taken into the building and not much later, released. 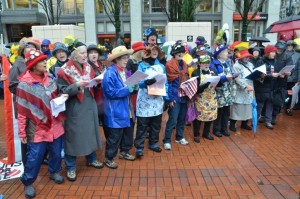 3 comments for “Occupy the Courts: An Occupier’s Excursion”