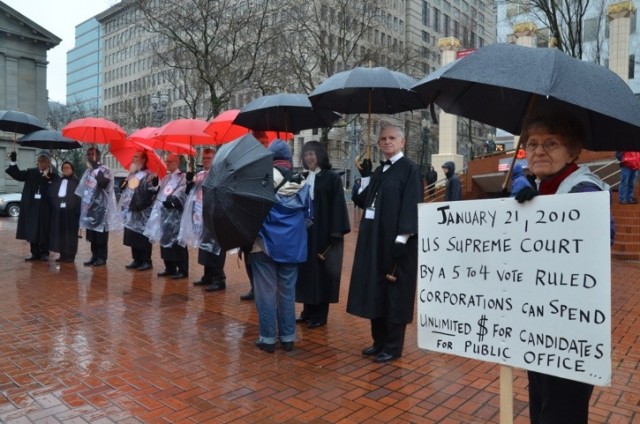 Occupy Portland along with Occupations from across the State of Oregon are planning to converge in Salem for the opening of the 2012 Oregon Legislative Session on February 1, 2012.  The coalition of occupation movements will work together to expose corporate influence, protest the austerity budget and advocate for initiatives favorable to the 99% of Oregonians. Individuals and affinity groups are encouraged to engage in peaceful creative projects to advance the goals of the Occupy movement.

The coalition of occupations, endorsed by the Occupy Portland General Assembly on January 8, 2012, will conduct an Oregon General Assembly to determine the priorities of our legislative agenda. Our organizing efforts are aimed at educating, empowering and supporting affinity groups and individuals in carrying out their protests.

It is the necessary time to protest. Austerity measures threaten our economy with budget cuts to schools, hospitals, parks, and social services. ALEC (American Legislative Exchange Council) reforms waste valuable resources on increased incarceration. Corporations are legally people and people are their useless commodities. Citizens’ votes are for sale thanks to corporate propaganda. Citizens’ voices are silenced through media imbalance, their communities bankrupt, polluted and out of work thanks to Wall Street speculators and the greed of the wealthiest 1%. Our current, historic wealth inequality and poverty levels are not happening simultaneously purely out of coincidence. They are intrinsically linked.

We shall renew our calls for an Amendment to the Oregon Constitution to specify that its rights are for people, not corporations. We shall call for corporate tax reform, as the program of tax breaks has unfairly shifted the burden to working Oregonians and clearly not served to promote job growth.

More information about the event can be found at https://www.facebook.com/pages/Occupy-the-Legislature-Oregon/269113373145794 or by emailing Imre Ilyes.