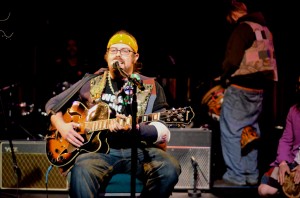 By Sarah Gallegos
Monday, January 16, 2012 marked the celebration of Martin Luther King Jr., but there was even more to celebrate.  Occupiers turned out to the Alberta Rose Theatre at 3000 NE Alberta St. in Portland to join Justin Bridges–who most of you may remember from when he was brutally and callously beaten by police last November during the parks eviction–to have a celebration of his own. Justin, joined by an ensemble band of 10+ Occupiers, gave his first performance since the eviction and beating. I got the chance to sit down with Justin just before the show to see how he is doing. He reports he can move his thumb enough to hold a pick and strum his guitar, but will lack the audience and band participation he so loves. With sadness, he laments about not being able to do the same guitar tricks that are synonymous with his style as a musician. Justin, like most Americans, doesn’t have health insurance. In order to treat his injuries he relies on natural therapies such as massage therapy, acupuncture, and herbal remedies. Thankfully Oregon is a Medical Cannabis state, so Justin has been using edible hemp oil called Rick Simpson Oil, named for the man who brought it to the Medical Cannabis Communities’ attention. While this provides some relief it is not enough. His surmounting medical bills, now tabulated at $25,000 and climbing, does not include the necessary physical and occupational therapy Justin needs to be made whole again. He has a chip in account set up for those who would like to donate. Shepard Griffin reports via the event’s Facebook page that $574 was raised to donate to Justin Bridges and David Burgess. Both men have legal and medical bills stemming from Occupy related incidents.
Here are a couple of videos from the performance:
Justin James gives first performance since Camp Eviction
Justin James explains his situation

Justin’s performance was magical. He was brought up in his wheelchair to an empty chair awaiting him. With his arm in a sling he was handed his guitar and clumsy held it and addressed the audience. All band members are people he meet at camp, drawn to his gentle spirit and infectious musical talent. Justin mentions that the large band is needed to fill the void he cannot fill on stage due to his disability. While a little life was breathed back into Justin through this performance, a morale booster for sure, I cannot help but reflect on all that the police took from him, and us, during that eviction. 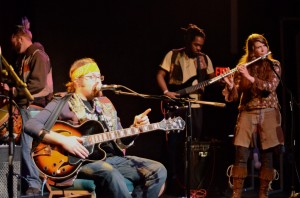