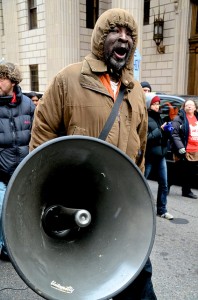 When I was a child, my favorite Dr. Seuss book was Horton Hears a Who! For those unfamiliar with the plot, the story revolves around the elephant protagonist Horton, who hears a speck of dust speaking to him. The dust, actually a tiny planet, is home to a group of people called Whos. Horton agrees to protect them from harm because “a person’s a person, no matter how small.”

In doing so, Horton is ridiculed and caged by other animals in the forest for defending something they refuse to see or hear. This is followed by their attempt to boil the dust speck in oil, that Horton may cease his “delusion.” The Whos are forced to make themselves known, by making as much noise as possible, to prove their existence.

This allegorical tale was an attempt on the part of Theodor “Dr. Seuss” Geisel to describe the American occupation of Japan after World War Two, and to alleviate some of his personal animosity towards Japan. Now, I feel a similar application of morality and empathy, which can be applied to the situation today. In the face of widespread unrest, people have a habit of hearkening back to the last sane moment of their lives, in an attempt to recapture a feeling of stability and safety.

Today, there is an occupation of a very different kind, and I am reminded of the plight of the Whos as I watch the plight of the world around me. The might of the select minority, the powerhouses of authority, refusing to hear the voices of a large group of people. It would seem to me that the allegory of the larger forest animals against the “little people” is very applicable to today’s headlines. The corporate influences upon our governmental and political systems acts as a large group of irrational animals, threatening to attack and destroy the civilization of “Whoville.”

In watching the large mainstream media sources attempting to provide coverage, juxtaposed to four different streams of alternative footage, two different tales are told. One with the rigid authority of written words backed by corporate interest, and one with images and video backed by human interest.

In the refusal to see or hear the voices of the various Occupy movements, the major media and corporate influences in government prefer to ridicule and cage those have the courage to stand up for their perspectives and livelihood.

As I write this, I am watching the events in New York, as well as the solidarity marches in Portland, OR and Dallas, TX. I am seeing reports of gun fire in Berkeley, and massive marches across the nation. The only statement coming from President Obama thus far, is that it’s up to each city to decide how much force to use, and that he’s aware of the situation. This is in stark contrast to prior behavior and statements made by him regarding the uprisings in foreign countries. It seems a cowardly move on the President’s part to authorize more bailouts, and then refuse to address the ramification of his actions effects upon the general populace. He should be held accountable, but more importantly, he should be holding himself accountable for those mistakes that led to this situation. I am quite aware that he inherited a large portion of this mess from the previous administration, but I do expect the administration to act with honor and integrity, as I also expected of a man such as President Obama.

It is unfortunate that as we grew into adulthood, our collective cynicism acted as an override of the fables we once held as being inherent truths about life. The lies we discovered as we grew, be it that of Santa Claus or the Easter Bunny, hardened our hearts against our idealism. We forgot about the message, and the morals in the fables of our youth, as we entered the “real” world of “adulthood”. It would seem that to be an “adult”, we are expected to be passive and accepting of every unjust rule and law imposed upon the populace for the benefit of a select few. It is long past time that we re-adjust and re-define the meaning of “adulthood”, because for too long have we collectively accepted the definitions of those who benefit from our passive obedience.

In the raids upon Zuccotti Park and the rest of the Occupy movement, I was offended by the removal of tents and tarps, but I can see the point of the police doing so in accordance with Mayor Bloomburg’s orders. There is, however, a right and wrong way to go about such actions. What I saw was wrong on several levels. The biggest insult was the destruction of Zuccotti Park Occupy’s Library, a very large collection of books that was being used to educate people, in light of a distinct lack of public education. When finances are taken from the education systems, and proper education is available for free, destroying books in a trash compactor seems a pretty symbolically tyrannical move. It remains to be seen how effective the symbolic attack on knowledge will galvanize the Occupy movements, but if we recall book burnings in other repressive countries throughout history, the message becomes clearer.

I am reminded at this point, that history repeats itself, as well as one specific quote of Martin Luther King Jr: “Never forget that everything Hitler did in Germany was legal.”

And while we now have the Godwin rule to make such comparisons to Nazism unreasonable arguments, and the general assumption that it applies to all situations of discussion, the intention on my part is not to compare the current events to that specifically. However, massive crimes are being made legal today in a very similar manner. Opposition to it is what we are seeing in the streets of the world today.

Thanks to the power of communication we have in the internet. Older methods of control over popular dissent through mainstream sources have been rendered obsolete, save the occasional messages from authority figures. In the Livestream feeds and on Twitter and Facebook, the message is quite clear. It’s a message of hope, in the defiance of outside authority figures attempted management of the lives of a previously silent majority. A sleeping giant has been awoken, and it refuses to be silenced, chanting a message to the authoritarian animals who refuse to listen.

3 comments for “Horton Hears an Occupation”