January 28th was a day blackened by the dark armor of riot police clear across the North American continent. In Oakland, the efforts of Occupy protesters to build a community center in a long abandoned convention hall were blocked by brutal repression at the hands of law enforcement. Over three hundred people were reported arrested by the Oakland Police Department, after they were rounded up from their peaceful protest without warning, kettled into a square, tear gassed, shot with rubber bullets and bean bags, beaten with batons, and then systematically imprisioned one by one. Among them were several members of the Occupy Portland Media team, who had traveled to the city in order to help with media coverage for their re-occupation. This photo below, shows the aftermath once the police had come in and done their work. American citizens sit, bound on their knees, which guarded by by a black-clad, invading army. 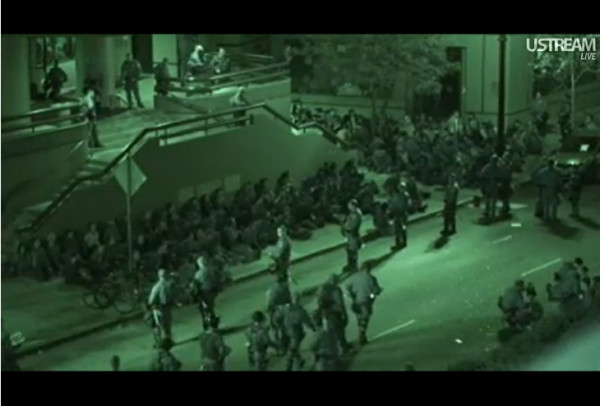 There was also police violence in Washington DC as Occupy protesters there attempted to blockade the spectacle of wealth that is “the Alfalfa Club”. In words taken from Occupy DC’s website:

If there were ever an event that embodies what the Occupy movement stands against, this is it — this Saturday, January 28th, the country’s elite of the elite will gather, as they do secretly once every year, for an alcohol-fueled dinner at the Capital Hilton Hotel near McPherson Square. Known as the Alfalfa Club (because of the plant’s infamous thirst), a highly selective group of nearly 200 attendees, including CEOs, Supreme Court Justices, congressmen, and other extremely wealthy dignitaries will get drunk on booze and self-importance.

The police naturally showed up to ensure that this event would take place, and chased Occupiers around the streets for hours, threatening them with beatings and arrest.

After the news of the attack upon the Oakland protesters spread via Twitter and Livestream, outrage grew. Much of the relevant coverage was coming from media activists themselves. Well-known citizen journalist “OakFoSho” had a particularly good feed, with upwards of five thousand viewers at pivotal moments, and for a period of time was embedded into Time Magazine’s website. (The above still frame comes from his channel.) A viewer of this particular feed would learn during the broadcast that more than five different media activists were arrested that day, because OakFoSho was given their video equipment to carry to prevent it from being seized. This comes on top of a number of professional media workers that were also arrested.

Solidarity protests were scheduled for Sunday at 7 PM local time, in both Boston and New York City. In Portland, outrage would not wait, and approximately 100 members of Occupy Portland marched through the street, gathering under the Hawthrone Bridge on Saturday evening. At this time, angry protesters in Oakland were breaking into the City Hall building, in response to the injustice dealt to so many of their fellow citizens.

Protesters began to gather under the bridge around 8 PM and the march began an hour later. Coincidentally Tom and Gary’s Decentralized Dance Party (a new Portland institution) was meeting at the same place at the same time. This led to some minor confusion prior to the march for both groups (neither of which had a permit) and for the Portland Police Bureau who arrived at about the same time and began to film the participants. They must of wondered why so many Occupiers were arriving dressed like extras from the movie “Flashdance”. What a feeling!

Most of the solidarity march was uneventful. After crossing the Hawthorne Bridge the marchers took to the street and walked up Main Street past Chapman and Lownsdale parks to Fifth Street. They then turned South on Fifth to Madison and ended at City Hall where there was a brief stop for a rousing speech by one of the organizers, reminiscent of patriotic speeches that have resonated throughout history whenever the freedom of the people is threatened by institutionalized oppression. 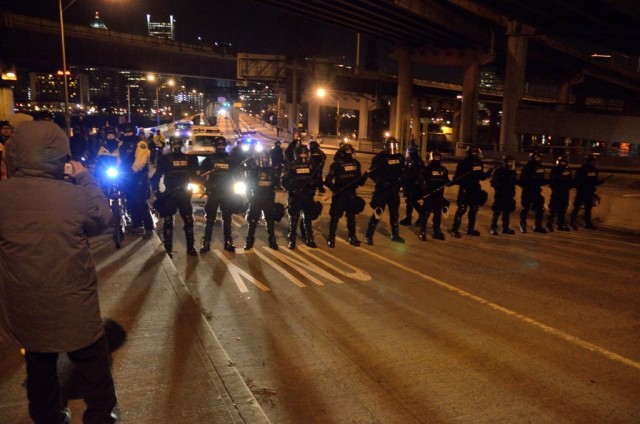 Again taking the street, the march continued to the (in)Justice Center for another brief oratory. From there, East on Madison back to the Hawthorne Bridge which was currently raised. Up until this point the police presence had been remarkably light with only a small innocuous escort by several bike police officers. At the Hawthorne Bridge however, some of the Occupiers began to walk in the outer lane of the bridge once it had closed, delaying traffic from leaving the bridge. On the other side of the bridge there was a brief altercation between several protesters and the driver of a vehicle and things began to heat up. The heat further increased when a truck laden with protesters briefly blocked both east bound lanes. Suddenly, two dozen riot police arrived and themselves took to the street completely, blocking the bridge on the East side in the Eastbound lanes. It was unclear what would happen next, and their stance’s similarity to the kettling procedure witnessed on Livestream only hours before did resonate. Thankfully, cooler heads in the Portland Police Bureau prevailed, unlike in Oakland, and the protesters were allowed leave the bridge by the stairs, leading off the span, to Water Avenue below. There were no arrests. From this point on until the march concluded where it had started, on the Waterfront underneath the bridge. Police presence remained heavy–and held sway, threatening arrest of any who dared step of the sidewalk. Solidarity with Oakland was shown by protesters on Saturday night, but also, apparently, on the part of the police.

3 comments for “From Oakland, to All of Occupy”