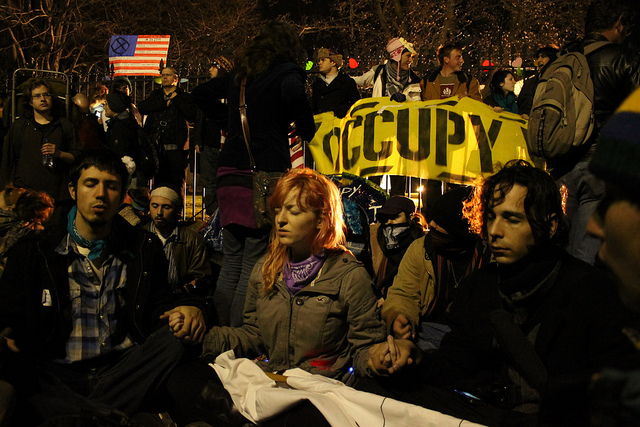 I’ve made a point to ask Cccupy Portland members this titular question and most of the time the person asked had no idea. On the other hand, regardless of what was usually a complete lack of understanding, a great reliance and support of non-violence was still professed. This is the “I know nothing about it but I strongly support it” syndrome upon which American political ideals seem to generally be based.

It’s wonderful that we have such a large group of people committed to non-violently changing our world. But it’s not enough to just have support without understanding. We are at war, whether blood is being shed or not. How can we even know whether we’re winning or losing if we don’t understand the principles of non-violent warfare?

If we’re going succeed in ending the oppression of the current global oligarchy that has captured our government, we have to break the deeply ingrained habit of obeying principles without understanding. We have to not only act, but we have to know why and how we are acting. The powers that influence public perception in our society (media, education, government, business) have perfected an omnipresent system. They create public perception regarding proper behavior and to force us to act behaviorally based upon those manufactured perceptions. We can’t fall into the familiar rut of mindless behavior. We have to be intelligent.

We, all of us, no matter how brilliant and ruggedly individualistic we believe ourselves to be, are the product of our universal system of behavior modification and social control. That vast system has captured our schools, media, religions, families, science, etc. Institutions in our society that we grant the greatest degree of trust and legitimacy are guilty of poisoning of the well of our own values and understanding. Because of this, we can rest upon no assumptions, and must take nothing as a given. We have to question everything, including the interior landmarks of our own intellectual landscape by which we navigate. We must question authority, and the authority residing in each of our minds is ultimately ourselves. No matter how great our peers consider an idea to be, we must refuse to adopt it until we ourselves understand it.

This is no small task. We have entered the most dangerous period in all of modern society. We have a globe littered with enough warheads to kill us all a thousand times over, either from radiation, weaponized bacteria and viruses, or chemicals. We are in a period of extreme and uncontrolled economic collapse–which always leads to warfare and inhumanity on a mass scale–and we’re in a period in which there is no power to maintain global control. As a globe, we are in political and economic free-fall and the dangers that lie ahead, if we can’t avert it, can scarcely be comprehended.

Fortunately, non-violence has been taught to us in schools, popular entertainment, etc. because the ruling powers consider non-violence to be a powerless tactic. Since it has been deemed powerless and ineffective, we have been allowed to engage in marginal “non-violent” resistance, and we have been given examples of dirty hippies screwing in the mud at music festivals as examples of such resistance. The American state, near the zenith of its global power at the end of WW2, developed this perception of non-violence. In the prior American age of wealth, which we are now seeing collapse into a shallow grave which it dug for itself, the flow of capital seemed inexhaustible, and therefore non-violence was deemed powerless. At that point, American government and civil society were essentially drunk on wealth that they assumed would be eternal. In our 234 year history as a Nation, 209 years have been at war. We are a culture that esteems violent warfare as the way to resolve political/economic problems. Things have changed.

There is nothing cowardly or nonsensical about non-violence. Just because we are non-violent doesn’t mean that we don’t require courage, strength of character, and conviction to succeed. We are still engaged in resistance to force government-corporate power to obey. Non-violence doesn’t work because the opposing force eventually “repents of their sin” and comes to embrace the beautiful principles that we embody. Expecting the oppressor to have a conscience or any understanding of right and wrong, or good and evil, is hopelessly naïve.

About 4% of the general population displays sociopathic or psychopathic personality disorder. The poor ones go to jail, the rich ones go to Congress. Sociopaths and psychopaths don’t understand remorse, compassion, or any of the other loftier logical processes of the human species, they only understand self-interest. Trying to change the heart of a sociopath is, to be blunt, stupid. Corporations are required by law to display a psychopathic personality disorder, and our government is, for the most part, just a revolving door between the public sector and corporate boardrooms. Our opponents in government and business are as remorseless and inhumane as any malignant power structure to ever infect humanity. We aren’t opposing a group of decent people that have “lost their way.” We are staring into the heart of darkness and challenging pure evil.

We aren’t after the heart or soul of government and corporations, we’re after their obedience. Non-violence isn’t so nonsensical as to rely upon stirring up noble sentiments in the opposing Power. The only sentiment we want out of it is fear. We want Power to tremble in blind terror over the consequences of its failure to comply. We want to trap the government-corporate complex like a rat in a cage and force it to obey on the threat that we’ll euthanize it if it doesn’t. Non-violence isn’t the act of groveling, hat in hand, in the hope that our destitution will cause that utterly psychotic power structure to pity us and grant us trivial concessions. Power isn’t opposed by weakness, power is opposed by power. The only way to force government to obey is by seizing the power to convince it that its self-interest is in obedience to the people. We don’t need tanks and nuclear weapons to do this, all we need to do is refuse to obey. By refusal to obey, we kick its pillars of support from underneath it and force it into a choice- total surrender or extinction. We produce the real wealth of the nation, and we’re the ones that keep the trains running. We police the streets and we educate the children. We fight the foreign wars and we grow the crops that feed us all. The powerlessness of the people is an illusion.

Non-violence works by a very simple principle, and understanding that principle is essential to formulating any pragmatic strategy. Non-violence works on the principle of depleting the enemy’s resources while demonstrating to the people that resistance is not futile. Non-violence is a war of attrition measured in dollars rather than bodies. Gandhi successfully resisted British colonialism because the British Empire was bankrupted by World War Two and was unable to continue funding the colonization of India in the face of widespread non-violent resistance to British rule.

When faced with organized opposition, the first impulse of Power is to crush it with violence. The State has granted itself the exclusive right to violence, and public perception is much more lenient when the State engages in it, in contrast with the public reaction when the opposition does. However, each time the State engages in brutality, it loses more of the hearts and minds of the people that it governs. It adds numbers to the resistance. The most effective method that the State uses to oppose non-violent resistance is through demonizing the resistance via a concerted campaign of propaganda. This is why an importance of understanding non-violence is imperative to its success. If we don’t understand how non-violence works, then we’ll be swayed by reports in the media that cast us in a negative light because of our successes.

While the overall strategy of non-violent resistance by a population is simple, so is the response by the opposing power structures. They will attempt to turn our own financial successes into public relations failures. When they deplete their resources fighting us, they will make a talking point of the negative effects to the public caused by that depletion of resources. If law enforcement makes a priority of utilizing their manpower to suppress Occupy, the police will also claim that crime is a result of manpower being diverted to the oppression of the Occupy movement (as happened in Portland when the police blamed a rape on the Occupy encampment tying up police resources). If we create a safe, egalitarian environment in which people attend marches with their families to participate, the police will claim we are using children as human shields, as Portland Police Bureau did on the night of December 3rd. There are many more examples of government and business resorting to this tactic of attempting to turn our successes into public relations failures. In fact, the majority of the media coverage of Occupy since its inception has been nothing but the implementation of this tactic.

This tactic by the power structure attempts to reach two objectives: decreasing the support of the population for Occupy, and convincing persons within Occupy that our tactics are alienating the public. This creates subversion from within, usually with the subversives being well-intentioned participants that are completely unaware that they are manipulated into aiding the enemy. These “useful idiots” of the opposition become alarmed at what’s printed in the media and propose engaging in capitulation to counter that perception.

It’s an act of extreme naïveté to believe that, by our actions, we can control this negative propaganda being churned out by the press. The more power we seize, the more negative the reporting will become. Actions with the intent of winning over corporate media by good behavior, such as clean-up details, park restoration funds, police liaisons tasked with providing intelligence to law enforcement, and all manner of wonderful sounding methods can go beyond uselessness and be counter-revolutionary. These attempts to appease a press that has no desire to be appeased just shift the economic burden from government and business and onto our shoulders.

This doesn’t mean that the unintentional subversives among us are suggesting capitulation should be dismissed out of hand. They are proceeding from an understanding that does, in its essence, have a great deal of validity; they have just prescribed the wrong cure though they correctly identified the disease. Non-violent resistance is highly dependent upon public perception, and the negative perception in the press needs to be countered. However, this perception created by the press cannot be countered by capitulation. To counter this negative propaganda, we must create an organ of propaganda ourselves. Occupy must directly reach the public to create the perception that we desire. Dissemination of information is essential. We cannot remain true to our objectives and maintain the support of the public without developing this capacity. Lacking the capacity to directly reach the populace just leaves us at the mercy of the enemy. If we launched an action to save animals from euthanasia, the press would claim that it’s because we are tossing them into wood-chippers. We must counter this.

Non-violence works, if we have the courage to engage in true resistance. However, we all need to become informed about the mechanics of non-violence or we’ll be our own worst enemy, making gains on Monday and erasing them on Tuesday. We need to approach non-violence as we would approach an apprenticeship in a trade. We’ve got a lot of learning to do before any of us are journeyman, and the world depends upon our willingness and ability to learn. If we can manage to rise above the hurdles placed before us and within us, then we can win this fight for the future of the human species. If not, then God help us.

10 comments for “How Does Non-Violence Work?”