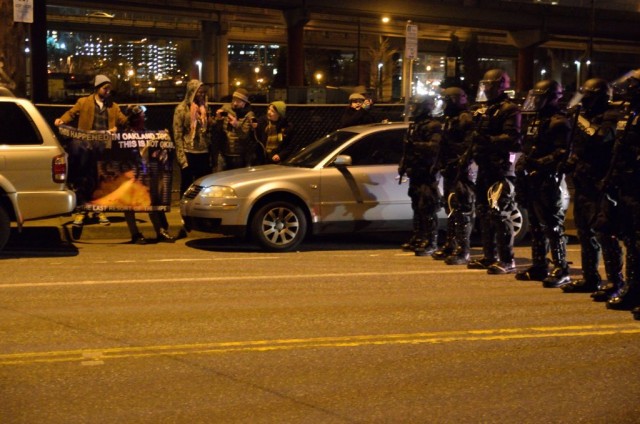 On January 26th, The Citizens Review Committee (CRC) held a public forum at the SE Community center in order to hear the public’s concerns regarding the Portland Police Bureau. Also present were members of the Independent Police Review from the city auditors office.

The forum consisted of around sixty members of the community in addition to the review committee. Facilitation was provided and the facilitators did a wonderful job of ensuring that every voice was heard. The process was simple. Each member of the community could sign up to speak, and each speaker was given approximately three minutes to voice their concerns to the board. At the end of the session each board member was given a few minutes to repeat back to the audience what they felt the overarching message of the community was concerning the Portland Police Bureau (PPB). The simplicity of the process worked wonders.

There were many concerns brought to the attention of the Citizens Review Committee. Mothers, veterans, the elderly, the houseless, teenagers, teachers, and people from all walks of life spoke to the unprofessionalism of the PPB. Dozens of citizens discussed how their encounters with the PPB changed the way they thought about the Police. Members from Occupy Portland brought up example after example of unprofessional police conduct and examples of police brutality. Veterans spoke to the police bureau’s obvious lack of training. Teachers discussed the need for the Police Bureau to learn how to de-escalate situations. Citizens brought up the need for steroid and drug testing, something which every member of the United States military does monthly. One woman specifically called out the police bureau for actively and aggressively pursuing protesters and activists. She felt, as did many in the audience, that the PPB was purposefully being rough with activists and protesters. One gentleman wanted the CRC to file a Freedom of Information Act request for all documents concerning Mayor Sam Adams’ inter-city conference calls that led to the nationwide militant crackdown against the Occupy encampments. There was a veteran who had been arrested for cutting down a blackberry bush who was in the process of losing his job because of the ridiculous charges brought against him by the PPB. There was a fifteen year-old who had been brutally assaulted by the PPB the night before, during the Solidarity with Tahrir Square March. The community provided example after example of situations where the Portland Police acted unprofessionally and violently towards the citizens of Portland.

Many people discussed the obscene and unnecessary tactics that PPB uses to break up un-permitted marches. These included the violent use of bicycles to corral individuals and groups, the use of chemical weapons such as gas and pepper spray, breaking up large groups of people at crosswalks, the inhumane treatment of PPB horses, the confiscation and destruction of electronic devices such as laptops and cell phones, the absolute lack of respect towards people from PPB Officers and Sergeants, and the recently new tactic of violently snatching people out of the crowd, surrounding them, and detaining them without justified provocation.

After the citizens spoke, it was the Citizens Review Committees turn to repeat what they had heard and to give advice on how to deal with the PPB. Many of the committee members told the citizens that their authority was greatly limited. They encouraged people who had either witnessed or been subjected to police brutality to file complaints with the Independent Police Review. They encouraged citizens to write down the officers name and badge number and to collect as many videos and witnesses as possible in order to file a complaint or to press charges. A note of sympathy from the CRC was present, but they made it quite clear that citizens had to follow the bureaucratic processes in order to change the PPB.

This author has a suggestion. Perhaps its time that the Occupations create Police Accountability Committees. These committees could assemble all video footage of police interactions with activists and identify cases of uncalled for behavior and police brutality. The committees could also take statements from all involved and submit them to the City Auditors Office for review. In this way, the Occupations would be holding their local governments responsible for any and all wrongful actions conducted by the police. It would also be a way to identify repeated actions of wrongful behavior by individual police officers and police commanders. Perhaps it could be the responsibility of the Police Accountability Committee to find out who the Police Commanders and Sergeants are during marches, protests, and occupations. By doing this, the Occupations would be letting the Police Departments know up front that they are serious. Any and all interaction with Police will be taped, viewed, and scrutinized by both the Occupation and elected officials. It would also be of great benefit to obtain copies of the Portland Police Bureau Standard Operating Procedure (SOP). Every Police Department has one. In this way the Police Accountability Committees can ensure that the Police are not operating outside of their well-defined boundaries. Occupations can fight against police brutality. Occupations have a duty to put and end to police brutality. Occupations have a duty to ensure that the police officers in our community are operating within the legal context of their duties. Unfortunately the Occupations cannot rely on our elected officials, the police bureau, or the city to do their jobs. Like everything else, Occupy Portland must take responsibility and ensure that all illegal acts perpetrated by the Portland Police Bureau are well documented and brought to the attention of the City Auditors Office and our elected officials.