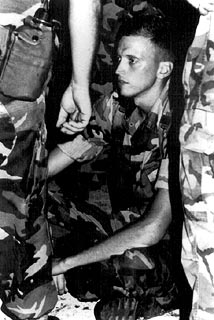 Jeff Paterson of the Campaign to Free Bradley Manning is touring the Pacific Northwest, and he stops in Portland this Thursday, Feb. 2 for a rally at the First Unitarian Church on SW 12th and Salmon at 7:00 PM.

Bradley Manning is the soldier charged with blowing the whistle on the “Iraq War Logs”, the “Afghan Diaries”, the “Gitmo Files”, and embarrassing US State Department cables, by releasing classified information to Wikileaks. All of the documents released have added significantly to public knowledge of war crimes, civilian casualties, government corruption, and the over-classification of information. No one has been harmed and the information has helped fuel pro-democratic protests globally.

Brad Manning is still in confinement, while real, known war criminals live the good life. Chances are you already understand why it’s important to stand in solidarity with his cause, but you may not know about the heroics of Jeff Paterson.

Jeff was a rural kid who faced limited opportunities and decided the Marine Corps would help him get his act together. Stationed in Okinawa, he wondered why the local people hated the U.S. presence as much as they obviously did. So he started checking out books in the base library and read up a little about American foreign policy over the past 50 years or so, and came to the startling conclusion that killing people for the financial health of multinational corporations was wrong.

“The U.S. military, particularly the Marine Corps, tells you there’s no point in talking to anyone about what you’ve been through because they could just never understand. What are they talking about? About how we [screwed] over all the people in the countries that we were in? How it’s perfectly acceptable to purchase a woman for a week or give their parents a dishwasher in exchange for a servant and a sex slave? How it is perfectly fine to blow up somebody’s house with a 155 mm Howitzer artillery –- which we did a couple of times –- and then pay off these peasants with canned foods from our mess hall? They told us that people on the outside wouldn’t understand all this. Ha! They’re right.”

In August 1990, during George Bush the elder’s war on Iraq, Jeff was the first GI to refuse to be deployed to Saudi Arabia. He publicly declared that he would not board a plane for deployment in support of Bush’s war, which he believed was illegal and wrong.

When his unit was told to get on the plane to Saudi, it was time to put up or shut up. So what Jeff did was .. sit down. He sat down right there on the tarmac, outwardly serene but quaking inside as he heard sergeants debating loudly about whether or not they should beat the crap out of him. (That’s him in the photo, making history as the first GI resister in the first Gulf War.)

Jeff’s phenomenal act of courage (or, if you really like war, “cowardice”) inspired other GI’s who likewise resisted deployment during the first war on Iraq. Jeff left the Marine Corps with an honorable discharge, and has since devoted his life to helping other GI’s who agree with God that killing is wrong.

Jeff’s life’s work in support of GI resisters brings him to Portland Feb. 2, where he’ll give info and updates on the extraordinary case of Bradley Manning. Bradley’s story is as relevant and vital as any in this age of institutionalized terror.

Hopefully someday soon Portland can welcome Brad Manning here so he can tell us his story for himself. Jeff Paterson works every day to bring that possibility closer to reality. In the meantime, come to the rally on Thursday, February 2nd to support him.

“God knows what happens now. Hopefully worldwide discussion, debates, and reforms… I want people to see the truth… because without information, you cannot make informed decisions as a public.”