I walked into Portland’s 2012 Town Hall “Voices of the City” meeting in Hoffman Hall at PSU, expecting to see half a dozen candidates in the middle of discussing their grand ideas of how they promise to make our city a better one. What I found was the soft buzzing of people partaking in democracy, and a a couple hundred minds at work. 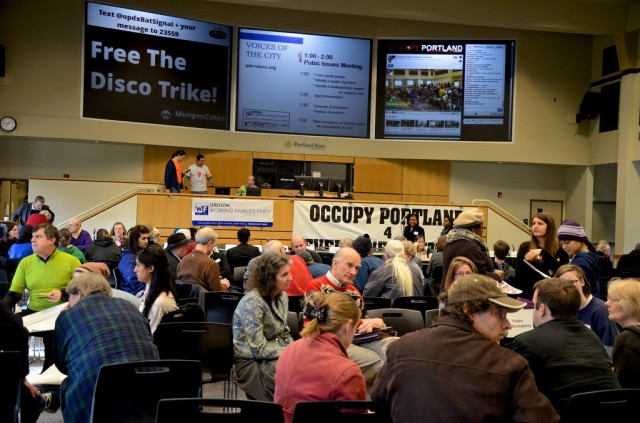 I walked around the room. I quickly noticed a projection above a row of tables facing and audience. On it was the Occupy Portland Livestream and chat, the Occupy Portland Bat Signal, and a schedule which detailed the work of each hour. The seats at the tables were empty, though were groups gathered around the room. I surveyed each group: Police Accountability, Campaign Finance Reform, Foreclosure Reform & Homeless, Moving City Money & Responsible Banking, City Labor & Services, and The 99%.  As I was wondering which topic I was most passionate about, I saw a group of folks diligently writing ideas down on paper.

I asked them what they were working on. They responded: “Homelessness”. I asked them if I could join their conversation. Some of the individuals in the group have been homeless or were currently homeless, and everyone there was engaged. We came up with five or six questions and then were asked to pick our top three. We voted by a show of hands, tied on one particular question twice, and came up with our final three. 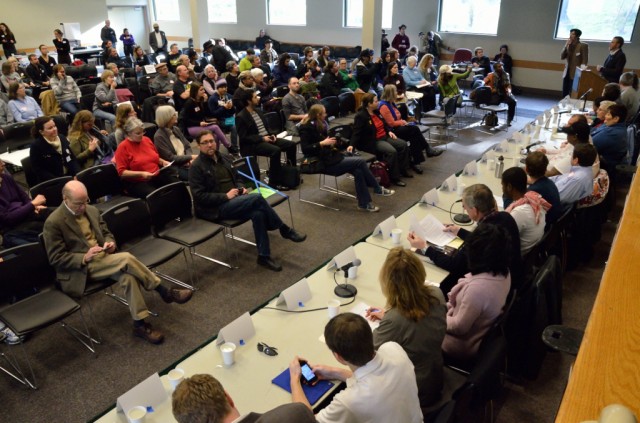 The candidates had taken seats at the rows of tables in front of us while we were brainstorming. The moderator began the discussion, allowing candidates to introduce themselves. Seated between each candidate was a testifier, whose job it was to introduce specific topics of concern. A testifier would explain the current situation in Portland, the moderator would present the “testifier question”, and then three or four randomly selected candidates would respond to the question.

Soon we reached the topic of Foreclosure Reform & Homelessness. The two questions presented were:

“If elected mayor, would you be willing to proposed citywide rules for bank owned properties to address bank blight? Would you also be willing to send city lobbyists to Salem to advocate for Portland on foreclosure legislation?”

“With continued federal cuts to affordable housing, and a stark 8% increase in the number of people experiencing homelessness in Portland and Multnomah County over the last two years, how would you defend the civil rights of people needing public spaces, sidewalks, and parks to sleep and survive?”

City council candidate Steve Novick said he received $4,000, $4001 from a donor that supported him one more dollar than last year, and $5,000 from the firefighters and that supporters could expect better healthcare, instead of 911 being primary care. Mayoral candidate Cameron Whitten said he doesn’t have any contributions over $200, and two $50 contributions. He said that he would make changes to finance reform. 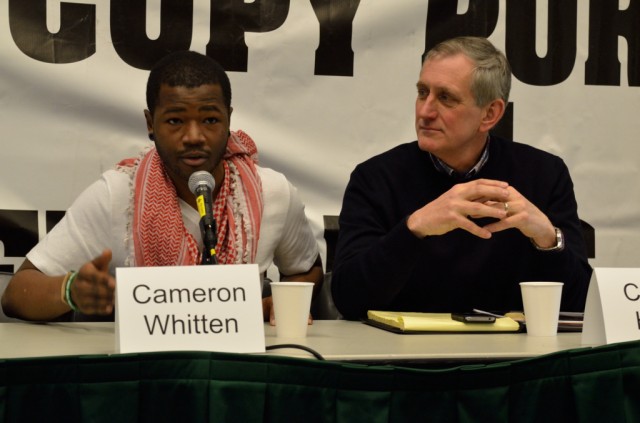 Mayoral candidate Charlie Hales said he has 550 contributors and has raised half through friends. He raised $20,000 from out of state friends, $25,000 from a light rail company, and had lots of $25 or $50 contributions. Eileen Brady said she gave herself $25,000, received $10,000 from former business partners who were also friends, and that she had 1,400 supporters. Jefferson Smith finished stating he had contributions of $4,000 from a Bus Project woman, $5,000, $1,000 from someone named Maurice whom I believe is working on his campaign, and $10,000 from a “rich liberal” whom he said he gave the check back to at first, because he wanted to raise his first $1,000 on contributions of $100 or less.

The crowd seemed pleased overall with the honesty. The candidates seemed like a mixture of “I’m glad my record is clean” to “I think I just threw up.”

I went on to my next question, which went to Jefferson Smith. I asked him, “How would you plan to integrate affordable housing into all neighborhoods?” Jefferson reminded us that if he was elected, he would be the first mayor from east of 82nd Avenue. He said he would map out where the cities resources are spent, make sure housing isn’t displaced to the outskirts of Portland, and invest in affordable housing that would link with amenities, looking at the whole picture. I was pleased with his answer, and it was the last asked from the spokescouncil.

The last ten minutes of the meeting were spent with the candidates giving a 30 second final statement. After the meeting closed, I spoke with a few folks, including Mark White who I apologized to for giving a loaded question, which actually seemed to be “tell us that you know women have more difficulty finding housing and how you would address this.” He said what he meant is that all homelessness needs to be addressed. We spoke about the issues with another woman who represented Human Solutions and we all agreed that is one problem in our city that has many layers and is difficult to solve immediately.